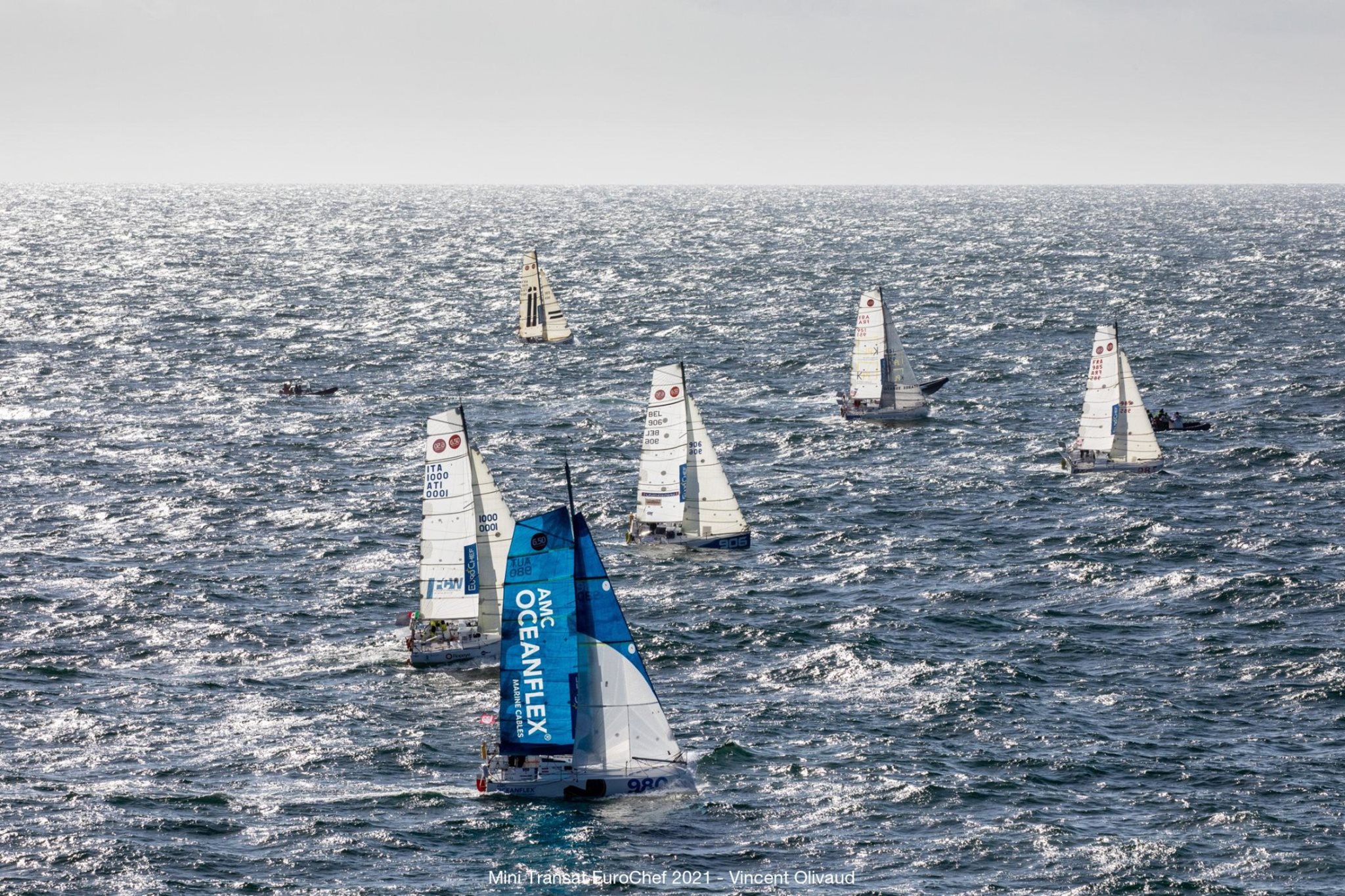 Whilst the first four competitors in the prototype category of the 23rd Mini Transat EuroChef have now arrived in Santa Cruz de La Palma, there is still an intense battle underway throughout the remainder of the fleet still out on the race track.

A fleet which is stretched out across 500 miles and is 150 miles apart laterally. It goes without saying that not all the competitors are benefiting from the same conditions. The current leader in the production boat category, Melwin Fink (920 – SignForCom), is clearly the fastest of the fleet and will remain so until at least tomorrow, which should enable him to extend right away from the bulk of the chasing pack.

Though Santa Cruz de La Palma welcomed the first competitors in the Mini Transat EuroChef yesterday evening, it is enthusiastically preparing to play host to their pursuers, though admittedly it will have a while to wait yet. Indeed, the next sailor due to make the finish is Germany’s Melwin Fink. But Fink is not expected to arrive before Thursday evening, whilst the bulk of the peloton are not set to make landfall before Saturday. The race course sees competitors sailing 1,350 nautical miles from Les Sables d’Olonne to Santa Cruz de La Palma.

What were already expected to be huge deficits are continuing to expand as a result of the weather being served up in the Atlantic. In fact, whilst all the fleet still out on the racetrack are making headway in a NW’ly breeze of around fifteen knots, the young German skipper of SignForCom is benefiting from breeze from the same sector, albeit considerably more consistent since there’s 20 to 25 knots across his patch of racetrack around Madeira.

Positioned 145 miles to Fink’s east, the other escapee of the group, Austrian Christian Kargl (980 – All Hands on Deck), is reaping the benefits of even more pressure. Over the coming hours, this might enable him to claw back a few miles in relation to the leader. A leader who is currently trying to rack up as many miles in the right direction as possible because, from tomorrow, the wind is forecast to ease to between 11 and 13 knots, at least until Saturday.

Further astern the fleet, which is spread out from the latitude of Gibraltar to that of Porto, is working like mad to gain miles. The challenge for the Mini sailors: to try to find the best route to the Canaries by playing around with their positioning. At the front of the pack, Julie Simon (963 – Dynamips) and Hugo Dhallenne (979 – YC Saint Lunaire) are making headway on a similar trajectory, 80 miles to the east of the direct route.

Evidently, it’s an option that is paying off as they have two knots more boat speed than their rivals further to the west, like Australian Christiaan Durrant (1015 – Little Rippa), Jean-Marie Jézéquel (951 – FondApro), Jean Marre (991 – Sport dans la Ville – Time for Life) and Cécile Andrieu (893 – Groupe Adre).

Their route is now being mirrored by others from the class like Léo Debiesse (966 – Les Alphas) in the production boat category and Sébastien Pebelier (787 – Decosail) in the prototype category, who might well be able to eat into their deficits and move up the leaderboard by tomorrow. The same is true for Basile Bourgnon (975 – Edenred) who, after originally indicating that he would be making a pit-stop in Cascais yesterday evening, has ended up resolving his spreader issue alone at sea and is continuing racing.