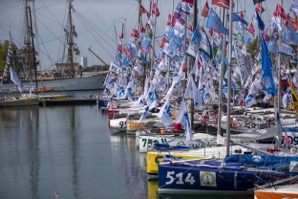 The lively wind and sea state in the Bay of Biscay, and offshore of Cape Finisterre, mean that it won’t be possible to reschedule the Mini Transat race start until this coming Wednesday at the earliest, meaning patience is key for the 87 men and women competing in the Mini-Transat La Boulangère 2019.

Inevitably eager to get going, the sailors will make the most of tomorrow’s warm-up lap with a 34-mile sprint around the bay of La Rochelle by way of a prologue. It is due to set sail from 14:15 hours and promises to be spectacular. From 10:00 hours to lunchtime, the local public will be able to witness the boats exiting the Bassin des Chalutiers.

It’s a very special situation for the sailors signed up for the Mini-Transat La Boulangère. In the grand scheme of things, they would normally have been taking the start of the first leg tomorrow, Sunday 22 September, but the weather has decided otherwise.

“Through till Wednesday, the weather window is bolted shut.”

Renowned meteorologist, Christian Dumard, presently working for the Mini-Transat La Boulangère, gives us the low-down: “Through till Wednesday, or even Thursday, there will be boisterous conditions in the Bay of Biscay, with the competitors being forced to punch into strong winds and high waves over a short period.

“It’s a very complicated situation for the Mini 6.50. After that, there is some uncertainty about how things will evolve. Another low-pressure system is set to put in an appearance on Friday, but it’s too early to tell how it will progress. The aim is for the competitors to sail in manageable conditions as far as Cape Finisterre.”

Denis Hugues, race director, supports this analysis. “We’re setting a maximum limit on the seas into which we won’t release the competitors. As long as the height of the waves is in excess of 3 metres, we won’t give the start.

“Through till Wednesday, the weather window is bolted shut. Conditions appear to improve considerably late next week, but if we can start the race before that, then that’s what we’ll do. We’re preparing to give the competitors 48 hours advance warning.”

Though we’ll have to wait a while to witness the start of the first leg of the Mini-Transat La Boulangère, the show will still go on in La Rochelle tomorrow. Indeed, from 10:00 hours to lunchtime, the public will be able to witness the boats parading out of the Bassin des Chalutiers, together with the presentation of the skippers.

Then at 14:15 hours, the 87 Mini 6.50s will set sail on the prologue. Starting and finishing in La Rochelle, the course will span 34 miles. Non-point-scoring, the race should be run in a west/south-westerly of 13 to 17 knots, gusting to 25 knots. “Conditions will be fairly bracing and the sailors will be allowed to sail with up to two crew members”, Hugues says.