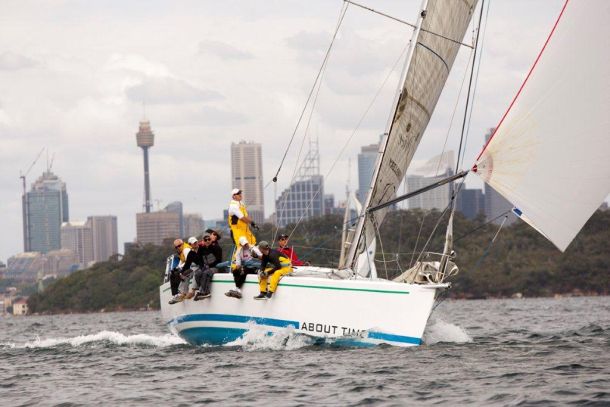 Yachting Australia President and past CYCA Commodore Matt Allen’s Carkeek 60 Ichi Ban, one of the larger boats in today’s race, was the first boat home, crossing the line at 15.01.51.

On skippering his yacht to its line honours win, Allen reflected, “It was a really tricky start, however we got out of the box nicely until we became parked just north of Shark Island and the fleet just sailed around us.    So it was pretty much a game of catch-up from that point onwards.   Staying close to the cliffs, putting up with the bump off the shoreline breaks and staying out of the current, which was running north, was definitely the pick of the positions to get out of the heads.    Once offshore, with a bit of wind, the boat went well and the boat and team performed excellently … it was a great race”.

Merlin is racing in the Autumn Pointscore so his win does not bump Julian Farren-Price’s Ocean Pointscore lead.

Farren-Price said of today’s race “It was light to start, and it was really slow getting out of the harbour.     We managed a good start in the light air and were just off the back of Paul Clitheroe’s Balance and Allen’s Ichi Ban.    Once we were out of the heads we sailed an excellent leg to Port Hacking in an 8 knot, south-east breeze….. sailing not far behind Swish and St George Midnight Rambler.    We picked it wrong on the leg back up the coast and St George Midnight Rambler just took off.”

On their Ocean Pointscore lead Farren-Price commented, “We are delighted to have the chance to win the overall Ocean Pointscore with just three races to go.     We have really enjoyed racing this series and look forward to the remaining races and the competition that will come with that”.

The race started off Point Piper at 10.00am this morning with Robyn Morton, the CYCA’s principal race officer, getting the fleet of 30 yachts underway in only about four to five knots of southerly breeze.    “With the conditions, it just seemed like the fleet spent such a long time getting out of the harbour, however once offshore they had enough breeze to all enjoy a solid race to Port Hacking and back.    They finished in five to six knots of east-nor-east breeze and Ichi Ban came in over the line first,” reported Morton at about 4pm just as the fleet were starting to finish.

The Port Hacking race, Race 7 in the Ocean Pointscore Series, finishes on March 21/22 with the Sydney Wollongong and return race.    The return race on Sunday 22 March is a non-pointscore race.