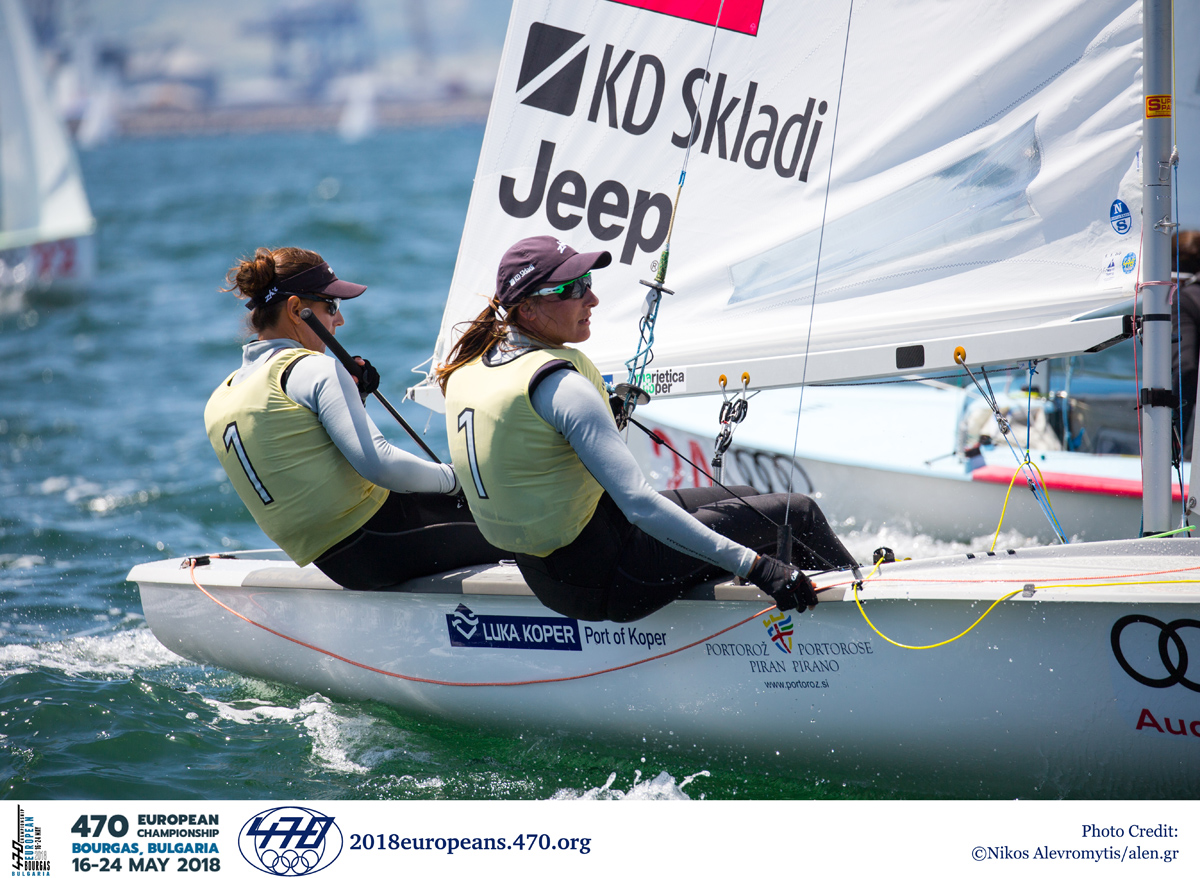 Another sensational day of perfect weather conditions off Bourgas, Bulgaria saw two races contested under a blue sky and breeze of around 10 knots, providing sailors the final chance to consolidate positions and climb into the top ten.

Sweden’s men's team of Anton Dahlberg/Fredrik Bergstrom (SWE) wrapped up the 470 European Championship crown after notching up an unassailable points advantage. All they need to do is start and finish the Medal Race to wear the gold medals. A right battle will unfold behind with any of the teams placed 2nd through 6th having a shot at the silver and bronze medals. Panagiotis Mantis/Pavlos Kagialis (GRE) go into the medal race in second with Stuart McNay/David Hughes (USA) in third.

In the 470 Women, Slovenia’s Tina Mrak/Veronika Macarol upped their game yesterday to take over the series lead and strengthened their control even further over the fleet today. They will need to hold their nerve to take the win though, as the super talented Gil Cohen/Noa Lasry (ISR) are pushing from behind. Rewarding their months of training, Germany’s Frederike Loewe/Anna Markfort enjoyed their best day of racing yet and move up to third.

The top six 470 Women leader board teams are all in medal contention, headlined by the world #5 pairing of Tina Mrak/Veronika Macarol (SLO). The medal race gives just one chance to deliver, the pressure is intense and it will come down to some smart decision making as the points difference gives all to play for.

The 470 Women leader board got stirred up today when the defending European Champions Afrodite Zegers/Anneloes van Veen (NED) dropped out of the top 10 and lost any hope of a title defence. The pair posted their worst daily scorecard of 19,16, knocking them down to 11th overall.

As Macarol revealed, it wasn’t a straightforward race day. “Today was really a difficult day with tricky conditions. You had always to be on the pressure and on the right shift, as it was really shifty. We managed to do a really good first race, gaining all upwind and downwind. In the second race, we had some problems. Maybe we were all the time to much in the middle of the course and losing boats from left and right. So, we didn’t do our best, but overall I think everyone was struggling with the conditions.”

The Slovenians last led the fleet going into a medal race at SWC Miami in January this year, and successfully seized gold. Whatever their medal race result, the only guarantee they have tomorrow is to finish within the top four overall. “We will try to stay clear, sail how we know best and try to have fun,” commented Macarol on their medal race strategy. “Because if you have fun, then I think everything should go right!”

Israel’s Gil Cohen/Noa Lasry sit in second going into the medal race, 13 points off the Slovenians, with Germany’s world #13 pairing of Frederike Loewe/Anna Markfort just 1 point behind in third.

Scores of 6,8 saw Loewe/Markfort leapfrog the competition, from 7th at the start of the day to end in 3rd overall. Last visit to Bourgas they finished 9th at the 2015 470 Junior Europeans, and are guaranteed an improved outcome tomorrow. Impressively, once their 12th in race 1 is discarded, they are the only women’s team to count an all top 10 scorecard. “We like stronger winds better, but we have trained a lot so are also getting better in lighter winds,” explained Loewe who has been racing with Markfort since 2014.

“We have a training group of three with the other German teams. Each team is better in different conditions, so we really do learn from each other,” continued Loewe on their improved form. “That has really helped. It has been really tough here. We always managed to have consistency in the end, but we always had to gain boats as we had a bad first upwind. There has been a lot of sweating and red faces!”

Game plan for the medal race, was summarised as, “Start clear and fast, no UFD and don’t make any mistakes and be first on the finish line.”

“We then have a low-five so no-one can see,” laughed Loewe, “and then we race!”

An impressive outcome for Germany, as all three of their women’s teams have advanced to the medal race.

Wrapping up the 2018 470 European Championship with a race to spare is a milestone performance for Sweden’s Anton Dahlberg/Fredrik Bergstrom. Last year, their silver medal at the 470 Worlds was a career best, and they have now topped that.

“Amazing. Pure happiness,” was how Dahlberg described their win back in the boat park. “When we came in, pulled the boat up, I then checked the results list. I had no idea,” he laughed. “Then I started to think what could happen, is there a protest? In the end it is just happiness. We know we are in a really good groove at the moment, and it is even better when you manage to execute, to excel.”

“It has been a super nice day, a little more shifty and a little less wind,” explained Bergstrom. “It is super tricky racing, especially the last race. We did a fairly good upwind, and then you look behind and just see a big wall of boats you know, chasing you just 1-2 metres behind.”

Staying calm under pressure takes experience, and Bergstrom has nine years of 470 campaigning under his belt. “We are doing sport, we are doing sailing. You know sailing, you lose, you win, it is a game all the time. Even though you round the first mark, maybe as we did like third, then you know that you are not going to end up third in the race, unless you do it as good or even better than the other people. If you make a mistake you are 5th or 10th. You just need to continue all the way across the finish line. We compete against so many good sailors you can’t expect to be on top all the time.

“We have trained a lot for this. I don’t know how to describe it, It is the details, the thinking. It is how efficient you are. We only are racing against ourselves, as it is ourselves making the mistakes and the good calls. You keep that in your head when you are practising and training. We are sailors 24/7,” were Bergstrom's closing words.

In the battle for silver or bronze, the hugely experienced Rio 2016 Olympic bronze medal helm and world ranked #2 helm Panagiotis Mantis was succinct in explaining his medal race strategy. “We will race as good as possible, try to be in front of the pack and that’s all – try to be in the top three. That is the key note to not lose.”

Despite being in medal contention, Mantis is not super happy with their performance, adding, “Compared to all our top mark roundings, we generally lost some boats during the race in the first shift down wind. We were not so accurate and it is something we need to work on,” before laughing, “I don’t know maybe I never understand the shifts downwind!”

Commenting on their race 11 win, Stu McNay kept it simple saying, “We turned it on for the last race!”

Placed in fifth overall, France’s reigning 470 Junior World Champions, Hippolyte Machetti/Sidoine Dantes will contest only their fifth ever medal race tomorrow. Recent experiences in Hyeres and Palma saw them struggle a bit under the pressure.

“It will be very close, so it will be a very good fight,” commented Dantes.

Benchmarking their Championship so far, Dantes added, “For the moment we are very, very happy. Our aim was to work our start and our speed and clearly these two things were very, very good and it was important for our regatta.”