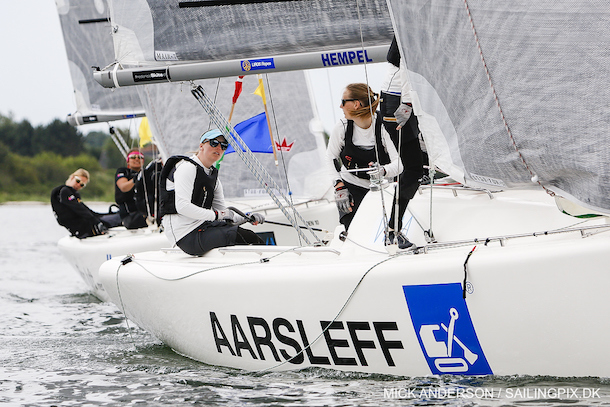 In the 2015 ISAF Women’s Match Racing World Championship, the first event on the 2015 WIM Series, the semi finalists were decided in Saturday’s quarterfinals. The toughest races were sailed between World # 1 and reigning World Champion Anna östling of Sweden, and her Danish World # 2 rival Camilla Ulrikkeholm. The Dane won only after five exciting matches, all with the intensity of a Championship final:

“Anna and her crew definitely gave us a few more grey hairs, just as they always do. We didn’t expect to meet them already in the quarters, but the picking turned out that way,” an exhausted but very happy Ulrikkeholm analyses.

“I think today’s racing was world class, and it’s really frustrating not to be sailing for the medals,” östling sighs, obviously very disappointed.

The strong westerly breeze from the round-robin stage of the 2015 ISAF Women’s Match Racing World Championship blew away Friday night, leaving a flat calm Middelfart bay with just patches of wind visible. Saturday morning a very light and quite shifty southerly breeze of just a few knots filled in, as the quarterfinal sailors gathered for briefing and picking of opponents.

Due to winning the round-robin, Anne-Claire Le Berre of France had the favour of choosing first, picking Klaartje Zuiderbaan from The Netherlands. American Stephanie Roble then chose to race Swede Caroline Sylvan, before home sailor Lotte Meldgaard selected Australian Katie Spithill as her opponent. These choices left World # 1 Anna östling and World # 2 Camilla Ulrikkeholm racing each other, an outcome that before the regatta would have been somewhat unexpected:

“We would never have chosen each other, that’s for sure” the Scandinavians agreed.

Zuiderbaan put up a great fight against Le Berre, breaking back in the second match, before the French went through to 3 – 1, securing their slot in the semis:

“It’s a great advantage being able to choose your opponent, even if all here are good sailors and choices hence are difficult. That’s why we really wanted to win the round-robin” Le Berre says.

“When entering a new stage of a regatta it’s always a little worrying, but I’m confident with my team, and they didn’t let me down today either. Some matches were really close, and I can feel that we’re getting better for every race” she continues.

Roble and Meldgaard won their respective quarterfinals 3 – 0, but the racing was a lot tougher than the results may show. Sylvan and Spithill didn’t go away easily, fighting hard to the bitter end:

“Caroline certainly kept the pressure on us, but my team did a good job with both tactics and speed. We felt really fast and focused, and we’re ready to race anyone tomorrow,” Roble comments.

“We were a little late in one of the pre-starts, but made no mistakes other than that. The light conditions are perfect for us, and we’re looking very much forward to Sunday’s sailing,” Meldgaard states.

Anne-Claire Le Berre will pick her semi final opponent at the Sunday morning briefing. The racing in Middelfart then concludes Sunday with the semis and the final to crown the World Champions.

Quarterfinal results in the 2015 ISAF Women’s Match Racing World Championship in Middelfart, Denmark, the first event on the 2015 WIM Series: