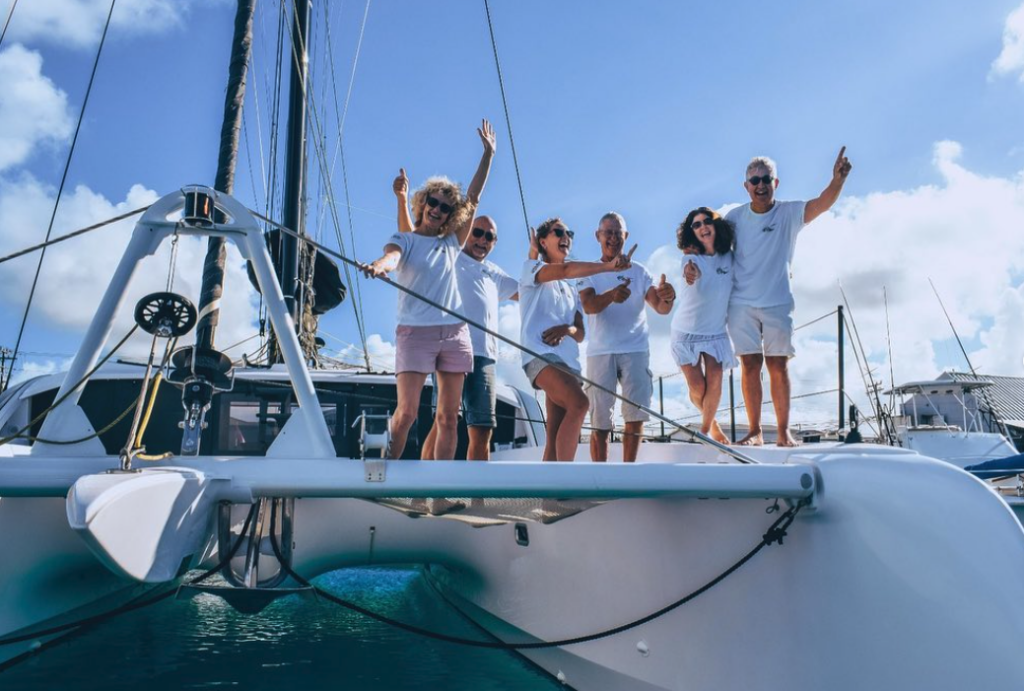 In 1519, on behalf of Spain, Portuguese navigator Ferdinand Magellan and his mostly Spanish crew set off on five ships with the intention of becoming the first fleet to sail around the world.

At the time most people didn’t believe a journey like this was possible and that the sailors would encounter fantastical creatures such as sea monsters and killer frogs.

Although there were no mythical beasts en route, the crew faced numerous challenges that included mutinies, the threat of beheadings, rotting food, scurvy and starvation. Over the course of the three-year journey, 80 per cent of the crew died, Magellan included. Castilian Juan Sebastián Elcano went on to complete this voyage on the one remaining ship – Victoria.

Fast forward 500 years — for three-years, a fleet of Grand Large Yachting yachts are almost six months into a voyage to commemorate the first circumnavigation of the globe. Participating in the Grand Large Yachting World Odyssey 500 are Sydney based Kiwis James and Tracey Smail aboard their Outremer 55 Akaroa III.

I recently caught up with James Smail when he and Tracey were aboard Akaroa III at a marina in Curaçao, a Dutch Caribbean island north of Venezuela. Tracey was chopping vegetables in preparation for the 500nm leg to Colombia the following day.

The catamaran Akaroa III is one of 30-plus yachts that set out on this mammoth 30,000 nautical mile adventure, which officially started from Grande-Motte, France, in September. Joining them are a variety of other Grand Large Yachting Group yachts, including several other Outremers. Throughout the rally, the yachts will cross “three oceans and more than 20 destinations”.

There are two route options: a tropical route, where the yachts go with the trade winds, and a southern route (similar to the route taken by Victoria in the 1500s). The Smails, along with most of the fleet, opted for the tropical route. The two routes will reconnect in Tahiti, and the yachts will sail together for the remainder of the journey.

The tropical route suits the Smails who have embraced the cruising lifestyle and “like to be warm”.

The couple, who are of “retirement” age, have done their fair share of sailing. Back home in Sydney, Australia, where they live in the Northern Beaches suburb of Manly, they used to sail the east coast of Australia aboard a Hanse 400. They then swapped the monohull for a multihull and went on to sail their Outremer 51 for several months each year over a five-year period in the Mediterranean. More recently they upgraded to an Outremer 55, which recently won European Yacht of the Year 2022 in the bluewater cruiser category.

“At the same time as we were ordering the 55 they [Outremer] said, ‘We’re going to do this world rally, would you be interested?’ and we said, ‘Yes we would’,” James said.

Although they have an impressive sailing resumé, the Smails had never embarked on anything on this scale before.

But so far, so good. In November and December, the Smails and their crew embarked on their biggest leg of the trip to date – a North Atlantic crossing from Tenerife, Spain, to the Caribbean island of Barbados.

This 2000-plus nautical mile sail often takes up to three weeks. But with the winds behind them Akaroa III took 11 days, flying the spinnaker for most the way. Joining them on this leg were James’ brother and sister-law, who are also seasoned cruisers, and British yachtswoman Nikki Henderson. Henderson is best known for her role as skipper on Visit Seattle in the 2017/18 Clipper Round the World Yacht Race. The then 25-year-old led her team into second place behind Australia’s Wendy Tuck.

James said the rally had been “everything that we hoped for”.

“It’s not always plain sailing as you can imagine because things go wrong, but we’re really happy with the boat,” he said. “We’ve got a really nice team aboard and we’ve had some great experiences and done things we haven’t done before – like cross the Atlantic.”

Akaroa III had six crew members for the Atlantic crossing. The crew will change and fluctuate in size throughout the voyage. The 55-footer can be sailed by two or three people if necessary. But on the longer passages, the more crew the better.

James is the skipper, but when it comes to decision making he said it was a team effort.

“I think everybody’s roles are equitable. We discuss what’s going on and make a decision based on what everybody feels is the right way to go.”

What of the other yachts? As we were talking, there was one other Grand Large Yachting Odyssey 500 yacht at the marina in Curaçao. But the others, ranging in size and design, are spread out. Not everyone will stop at Curaçao but the fleet will meet up at specific destinations along the way.

The Smails are looking forward to exploring new destinations, like Cartagena, a port city in Colombia, and the Panama Canal, a 77km man-made waterway that transports vessels from the Atlantic to the Pacific Ocean (or vice-versa).

“Every place we go is a new discovery,” James said. “We often get asked ‘Where is your favourite place?’ and I think it’s a bit of an onerous question to have to answer because each place has its plusses and minuses, more plusses than anything. The whole reason we go is to learn new things and make new discoveries.”

The biggest leg of the odyssey from the Galapagos Islands to French Polynesia in the Pacific (approximately 3000nm), will be an exciting challenge for the crew.

And in the Southern Hemisphere, the Smails are looking forward to making a slight detour from New Zealand’s North Island to Akaroa (the catamaran’s namesake), in the South Island, to attend their daughter’s wedding in February 2023.

Once they arrive back in Sydney, they are undecided as to whether they will continue the odyssey, which is set to finish in La Grande Motte (the official starting location) in April 2024.

“We’ll just see how we’re doing,” James said. “We love it at home and there’s good sailing in the Pacific.”

In the meantime, they have loved sailing in the Northern Hemisphere. This is no race, so the Smails and crew have enjoyed hearty meals, with food mainly prepared by Tracey, whose cooking has the tick of approval from James.

“We eat very well. We have a dry boat policy, so we don’t drink when we’re sailing. But we have great tucker.”

While offshore, they also try to optimise their sleep time when possible. They have three watch systems, and aim for three hours on, six hours off.

Thanks to a water maker the crew has access to showers while sailing, even if it’s only for a quick rinse. “You’re very conscious of water, you’re trying not to use more than you need because to do that you need power,” James said. “We have solar, but you have to be conscious of all aspects of power and water and everything else.

“We might be a little bit on the nose by the time we get to our destination, but then you can have a nice long shower.”

As to weather forecasts, apart from the official weather briefing from Grand Large Yachting at the rendezvous points, it’s up to the Akaroa III crew to check the weather.

The weather, James said, was the main challenge on the voyage.

On a daily basis, the crew uses the weather forecast apps Predict Wind and satellite communication device Iridium Go to obtain weather models. Iridium Go enables contact with crew on other yachts on the journey to check in, share knowledge and weather updates.

“Comradery is part of the reason we are on the rally. It’s working out well in that regard, we’ve met very nice people.”

It hasn’t all been champagne sailing for the Smails.

“I think some people get the impression that it’s all cocktails at sundown,” Tracey said.

James said the boat has had its fair share of breakages. The freshwater impellor broke and a leaking toilet will get a new part in Panama. There is also an issue with the gennaker, which means that while sailing, Akaroa III is “not as quick on certain angles”. But fortunately, they’ve got a full set of sails which they can use in the meantime.

Sea sickness has not been a big problem for those onboard Akaroa III, they’ve been luckier than some. One of the yachts was forced to retire from the rally because a crew member was unwell for an entire leg.

The Smails have loved their encounters with dolphins and pilot whales and look forward to seeing more marine life as the journey progresses. However, they have also observed, first-hand, the decimation of the ocean as a result of human impact.

“There’s not as much sea life as there was years ago. It’s concerning,” James said.

The Grand Large Yachting Odyssey 500 recognises the importance of looking after the environment and educating sailors on more sustainable practices, even in the open ocean. As part of the odyssey, the sailors will visit places that are experiencing the impact of climate change, including the Galapagos Islands and Australia’s Great Barrier Reef. The sailors will undertake educational programs on these issues at designated destinations. And they have the opportunity to collect data along the way for scientific studies.

Another challenge the Smails have navigated is Covid-19.

“It’s a bit of a pain in the backside really,” James said. “It’s limiting because if you’re going around the Caribbean for example, you have to have a PCR test before you go to each island, so it means that you have to make a decision as to where you’re going to go. You can’t just say ‘Well, we’ll island hop’ because it’s inconvenient and it’s expensive.”

Borders of desirable destinations such as Tonga and the Cook Islands are currently closed, so the Smails are going to have to play it by ear as they near these locations. Uncertainty also surrounds the opening up of New Zealand to crew aboard rally participants from France and the Netherlands.

Despite the added complexity that Covid-19 brings to the voyage, the Smails wouldn’t have it any other way.

“We could have just waited and said ‘Let’s wait until Covid’s over’, but who knows when Covid will be over. So, we’re just going with the philosophy of live life and get on with it,” James said.

“You’re living the dream. That’s a bit of a corny phrase, but we are doing that really because we have planned this for a long time and now we’re doing it.”