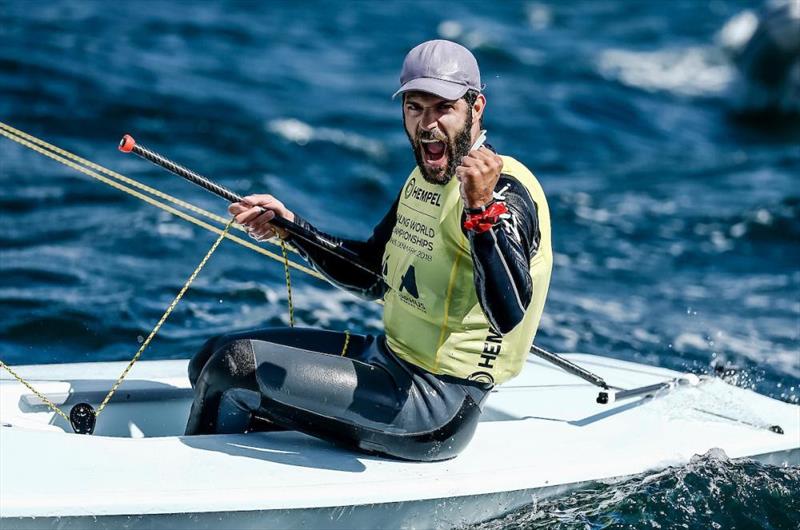 Emma Plasschaert won Belgium's first world championship gold in the Laser Radial at the Hempel Sailing World Championships Aarhus 2018 on Friday, proving along the way that Marit Bouwmeester is beatable.

On a bright and breezy day in Denmark's Bay of Aarhus, the gusty offshore west/south-westerlies had dropped down to 17 knots from the 25 knots for the start of the Laser Men’s 40 minutes before.

Howling out through the buildings and trees the wind provided perfect stadium racing conditions close to shore for the thousands lining the Harbour promenade.

Plasschaert had started the day 11 points clear and only needed to finish sixth or better in the 10-boat field to make gold hers. In the end, she was fifth, but Bouwmeester was fourth and had never been able to put enough boats between them.

“I knew Marit was so good in these conditions, so I was a little bit afraid she would jump over me,” Plasschaert said. “I'm feeling amazing and overwhelmed to win the World Championship. It's my first big win, it's my first gold in a championship.
“I thought it was too windy to go match racing and I'm not that good at it yet.”

For the 24-year-old Plasschaert it is a breakthrough win in a highly competitive field and reward for a week where she has been the best sailor, never finishing lower than 15th in the huge 60-boat fleets.

“The key to winning here was being consistent,” she said. “The conditions are so tricky, and I just needed to be up there every time. I was trying to have good starts and not be too extreme, but also stay attached to the front group.

“I think over the recent months I have just stepped up my mental game a lot and worked on my on-water strategies.”

For the whole of the Belgium sailing world, and particularly, Evi Van Acker, their previous hero who was in the TV commentary box in Aarhus, it was a moment to savoir. Acker retired last year after finishing second to Bouwmeester in the class world championships last year for the second time.

There had been a glimmer of an upset at the top mark after the first upwind. Bouwmeester rounded in third and Plasschaert in eighth, 12 seconds later.

The fleet was so compressed, with only 50 metres separating the top eight for large parts of the race, that there were always opportunities for big swings. But Bouwmeester needed to get away at the front and could never manage it.

On the second wind, Plasschaert had come back to sit right on her shoulder and she never let her get away again.

She also won the class world championships last year. She made no excuses afterwards of being here as part of her Olympic training cycle. She was here to win.

“I left myself a lot to do, 11 points is a lot,” she said. “She (Plasschaert) has been very consistent. I think I underestimated how difficult it is sailing here and did not spend enough time training here.

“I tried to get on the left side and obviously tried to get ahead. Then she came with me and I thought ok, as long we as bring it back to the pack hopefully I will get a chance if it gets busy or gusty, but unfortunately, it didn't turn out my way.

“To be honest, I think this Medal Race was pretty difficult. I just performed below my own level at the beginning week. So, with all respect for the Belgian girl, I think it's due to myself that I didn't win this event.”

The battle for bronze was more intense with just six points separating four boats going into the medal race. Denmark's Anne-Marie Rindom started in third, but watched her rivals line-up to take the bronze from her.

Canada's Sarah Douglas had it at the top mark, rounding first with Rindom in sixth. It got worse for the home crowd. Rindom was languishing in eighth after the first downwind and the USA's Paige Railey was also ahead of her.

However, as she had said on the slipway before they headed out into the strong wind, “my nickname is the bulldozer, so they better watch out.” She had hammered her way up to third by the second downwind and bulldozed on to bronze.

In the Laser, Cyprus's Olympic hero, Pavlos Kontides, will always remember the Bay of Aarhus. He won gold yesterday a decade after he won the Youth World Championships here.

Victory had looked far from certain and Kontides, 28, looked in real trouble in the big winds at the top mark. The fleet were doing their best to keep the boats flat and as he rounded in ninth he healed over, taking on water. Australia's Matt Wearn was sixth, 19 seconds ahead and looked like he might get away.

Wearn, 22, had trailed by just four points going into the medal race and just needed to put a boat between them. But the wind dropped down to 12 knots on the first downwind (from 25 at the start) and Kontides – who became the first-ever Olympic medallist for Cyprus (in any sport) with his silver at the London 2012 Olympics – kept chipping his way back.

He was last at the bottom, but 13 seconds behind Wearn in eighth. The wind increased and by the second upwind the gap was just two seconds and they were into the match racing situation expected from the start. Wearn had Great Britain's Michael Beckett just metres in front all the way to the line but could not get past him.

“I feel amazing,” Kontides said. “It's hard having to keep someone like Matt Wearn behind you. The quality of this fleet is so high and so deep that you always have to be at the top of your game.”

Unlike Thursday, the medal races on Friday did not shuffle the deck. Germany's Philipp Buhl was the only one to break to break into the top three, easily winning his battle with Britain's Elliott Hanson.

Hanson was last round the first top mark and was already watching bronze slip away when he picked up penalty for rocking downwind. By the first bottom mark, he was 41 seconds behind Buhl and the bronze was gone.

Nacra 17
Only three points separate first and third in the Nacra 17 fleet. It's very close and all three medals are up for grabs. Ruggero Tita/Caterina Marianna Banti (ITA) lead in the pack, while Nathan/Haylee Outteridge (AUS) sit in second with only one point separating them and the Italians. Santiago Lange & Cecilia Carranza Saroli (ARG) are third, with a point gap between them and the Australians.

Men's 49er
No changes in the 49er leaderboard. Croatian brothers, Šime and Mihovil Fantela remain on top and go into the Medal Race 13 points clear of Tim Fischer and Fabian Graf (GER), who are second. Erik Heil and Thomas Ploessel, also from Germany, are third.

The sailors said:
Anne-Marie Rindom – Denmark – Laser Radial (bronze)
“I had to be right after Paige and I had to have one boat between me and Sarah Douglas (CAN) and the same with Monika Mikkola (FIN). I had to take that opportunity to do everything I could to at least get a medal.

“Before the Championship, I was ready to go all in and win gold because I've had a good season and prepared a lot. But the final (qualifying race – race 10) didn't go the way that I wanted, especially the last race. Pretty disappointing for me.

“The nickname the 'Bulldozer' came from the Rio Olympics, when I got disqualified in the third race and the day after that, there was a lot of wind. One of the Finn guys from the Danish team said to me that I should just go out there and be a bulldozer and just cross everybody, and I did that on the day and came first and third in the two races. That nickname stuck to me ever since.”

Pavlos Kontides – Cyprus – Laser (gold)
“To win the Worlds, I had to match race Matt (Wearn), I could only lose to him. I couldn't be over the starting line because Matt was giving a chance to Elliot Hanson. I was four points behind Matt and that meant that he had to put a boat in between us in order for him to win.

“This is like déjà vu because 10 years ago I won the Youth World Championships here, at the same venue and place (Aarhus). It's amazing considering that this is the main event for everybody.

It's the Olympic qualifier and everybody is fully prepared. It's hard to get to the top but it is much harder to stay at the top because everyone is chasing you and you have a lot to lose, which puts a lot of pressure on you.

“It was a tough race with tricky conditions. The wind was shifting a lot, which meant that there were plenty of opportunities around the course.

I think I had a good job at the start. It was bias towards the left and two of us started near the committee boats, so we were immediately at the back of the fleet.

“Matt was very fast in these conditions and at some stage he managed to pull away. At that moment, he was winning the race and I had to keep concentrating to the very end. I managed to come back and finish behind him, which was enough to win.”

Matt Wearn – Australia – Laser (silver)
“I just needed a boat between us to win. It looked like I did a job of that in the first upwind with a nice gap, and the possibility of passing a couple of boats in the second lap. The wind just shut off and that opportunity slipped away pretty quick. I got back into it and leading him down into a couple of other people, but they couldn't get in the gap.

“It was a tricky week, we've had all sorts of conditions, so you need to be an all-round sailor and the consistency showed again during the week. I'm happy with silver but slightly disappointed that I didn't take the overall win.”