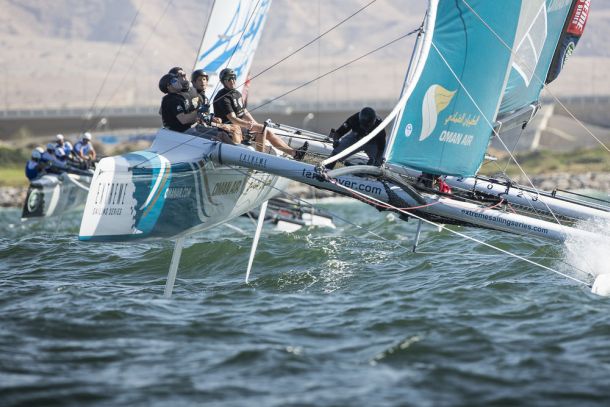 After six races, just two points separated the Omani and Danish teams – with the advantage in the hands of Rasmus Kostner and Jes Gram Hansen on SAP Extreme Sailing Team, after winning the first two races of the day. The teams went toe to toe in the final and 29th race of the Act, and it was The Wave, Muscat who took control from the start, playing the light seven-knot wind shifts expertly, to extend away from the fleet and take the race win and overall Act victory – SAP Extreme Sailing Team taking third place to secure them second.

“It was a tough day, it didn’t go to plan, we had some really difficult starts and SAP (Extreme Sailing Team) really put the pressure on, so it was pretty evenly matched,” explained helm McMillan. “We had to dig deep and we knew it would come down the last race, all we had to do was beat them or they beat us. Everyone on the boat kept pushing hard to make the best of the situation and in the end we got the result, but it wasn’t easy.”

Third place was a battle between the Austrian Red Bull Sailing Team and Oman Air and the pressure was evident. On the start line of race two, Oman Air collided into the back of the Austrians, knocking off their rudders and causing irreparable damage. An average points redress for Red Bull minimised the points damage – the Olympic champion from Austria Hans Peter Steinacher and his team finishing the Act in third overall, ahead of Oman Air. The team were unable to recover from their black flag disqualification resulting from the collision, despite a strong performance all week, as Morrison summed after racing: “We were hoping for third but we unfortunately had a little bit of a run in with Red Bull. We made some mistakes today and it was a little frustrating but over the week as a whole its been great, hopefully we will go and shake the Red Bull guys’ hands and they will forgive us for the little tap we gave them!”

Series Main Partner to the Extreme Sailing Series, Land Rover presented the Above and Beyond Award to relative newcomers, Team Turx powered by Kaya Ropes, co-skippered by Edhem Dirvana and Mitch Booth. The team posted six podium positions, one race win and were the third highest point scoring team on the final day.

After 2 Acts this year, (the first in Singapore just five weeks ago), Red Bull Sailing Team, The Wave, Muscat and SAP Extreme Sailing Team are all tied on 18 points on the Series standing. Next up, the Series moves to Qingdao, China, 30 April – 3 May.

On the dock after racing the teams said:

Phil Robertson (NZL) helm Gazprom Team Russia: “We had a pretty tough day, very tricky conditions especially for us being a very new team. It is really hard to find our modes on the boat and we struggled with our downwind speed. Looking forward to China, there is a lot to improve on and I hope this result has stirred up the whole team to want a better result.”

Lorenzo Bressani (ITA) skipper/helm Lino Sonego Team Italia: “It was a good week with very nice conditions – waves and strong winds at the beginning and light winds and chop today. For us we have had some high and low results, very difficult to go fast with chop and light winds and I found the reaching starts very challenging as it is my first time with them.”

Ian Williams (GBR) co-skipper/helm, GAC Pindar: “It was a tough day for GAC Pindar, we haven’t really figured out the reaching starts yet, so from there we were battling a little bit. But it appears we have got sixth place so an improvement on the last regatta, and hopefully we can keep improving.”

Mitch Booth (AUS) helm/co-skipper Team Turx powered by Kaya Ropes: “It was a good day, we set out to try and be consistent and that is what we achieved. We are really happy with the way the team went. We coped better with the reaching starts today, we feel like we are improving and we now prefer them.”

Stevie Morrison (GBR) helm Oman Air: “I thought I was settling in pretty well until I smacked into the back of another boat. I may have thought it was shorter than it was! Apart from that I actually feel like we are racing now, and consistently in the top half of the fleet rather than the bottom. We are now looking forward to push on.”

Jason Waterhouse (NZL) helm Red Bull Sailing Team: “In the race with the incident we had a pretty good start, we went for a gybe-set and I think Stevie thought we were going a little faster than we were and unfortunately we were in his way – Stevie took out our rudder. I have complete respect for Stevie and we are good mates, accidents happen as we are racing in the Extreme Sailing Series. But we are excited for China, bring it on!”

Rasmus Kostner (DEN) co-skipper/tactician SAP Extreme Sailing Team: “It came down to the last race where it was double points and we knew we had to beat The Wave Muscat. We were trying to play them a bit to see if we could make it hard for them at the start and to see if we could lead them in the race, but unfortunately they escaped that very well in the last seconds, ending up with one of the best starts in the fleet. We followed them around the race course to see if we could catch them but they were not making any mistakes, they won it fair and square but it was a good fight.”