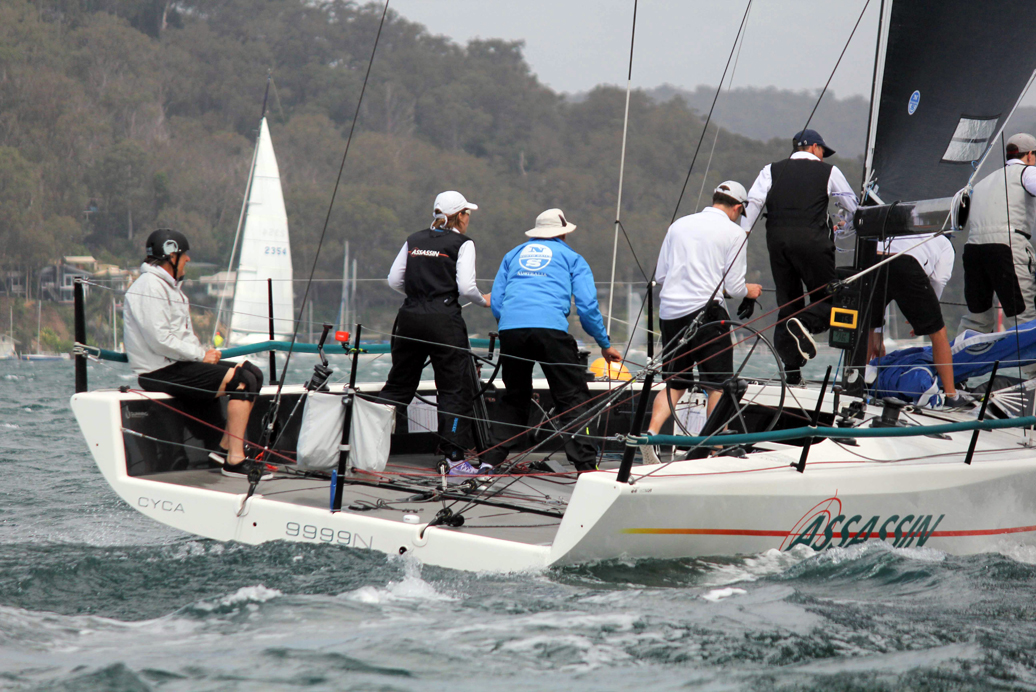 Day one of act one of the MC38 2016/17 Summer Series Championship was a test of boat handling with south-east winds up to 28 knots sorting out the slick from the sloppy when it came to crew work in the four opening races on Pittwater, north of Sydney.

Other than a knot in the kite halyard in the last race of the day, Howard Spencer’s Menace from Royal Akarana Yacht Club in New Zealand looked in command and easily scored boat of the day thanks to their 1,1,2,2 results.

Elsewhere in the fleet masts were in the water at times, boats were rounding up in the gusts and among the damage was a monumental kite tear on Ginger. When they were under control and wound up downwind the MC38s threw out massive bow waves, planing at 20 knots with each crew packed at the stern quarter balancing the weight and strain on the kite.

Menace’s tactician Ray Davies summed up, “Pittwater really turned on an exciting day for the MC38 fleet, 20-28 knots and the key was the crew work. Ours was really solid, only a few little mistakes in the last race but after sailing past the bottom mark while we sorted out the knot we got though three boats on the way to an upwind finish and came in second. Howard did a great job of steering in difficult conditions.”

Second on the overall pointscore by six points is John Bacon’s Dark Star, the winner of race four, and third by a point is Neville Crichton’s Maserati racing team which didn’t score better than second but likewise didn’t score worse than fourth.

“The things go…” he nodded, happy to be back at the host RPAYC at Newport after recording a top speed of 19.5 knots under spinnaker.  “The highs and lows are really emotional; you could go from sixth in one race and win the next one,” which is exactly how race two and three played out for the Ginger crew. “WOW…great sailing…everyone lost it at some stage. You only have to be two degrees off to get it wrong; you don’t go slowly and they are hard to pull back and save. Oh well, it’s only water…” Barlow added.

The guest skipper says he’ll be back tomorrow for some more punishment though the worst of the weather appears to be over with NNE winds 10-17 knots forecast for the final three races before the breeze climbs back up to the 20 plus knot range overnight.

Prior to the start of the third race on Saturday October 8, 2016 there was a decent delay as PRO Steve Merrington’s race committee and the rest of the fleet waited for Ginger to tidy up after their spinnaker calamity, and for Chris Hancock’s Vino to repair multiple broken mainsail battens. Vino’s crew advised the PRO they would be a DNS – Did Not Start – but charged the start line from a great distance and snuck in just a few seconds late, and in clean air.

Three more races are scheduled for Sunday October 9 on Pittwater starting at 1100hrs.