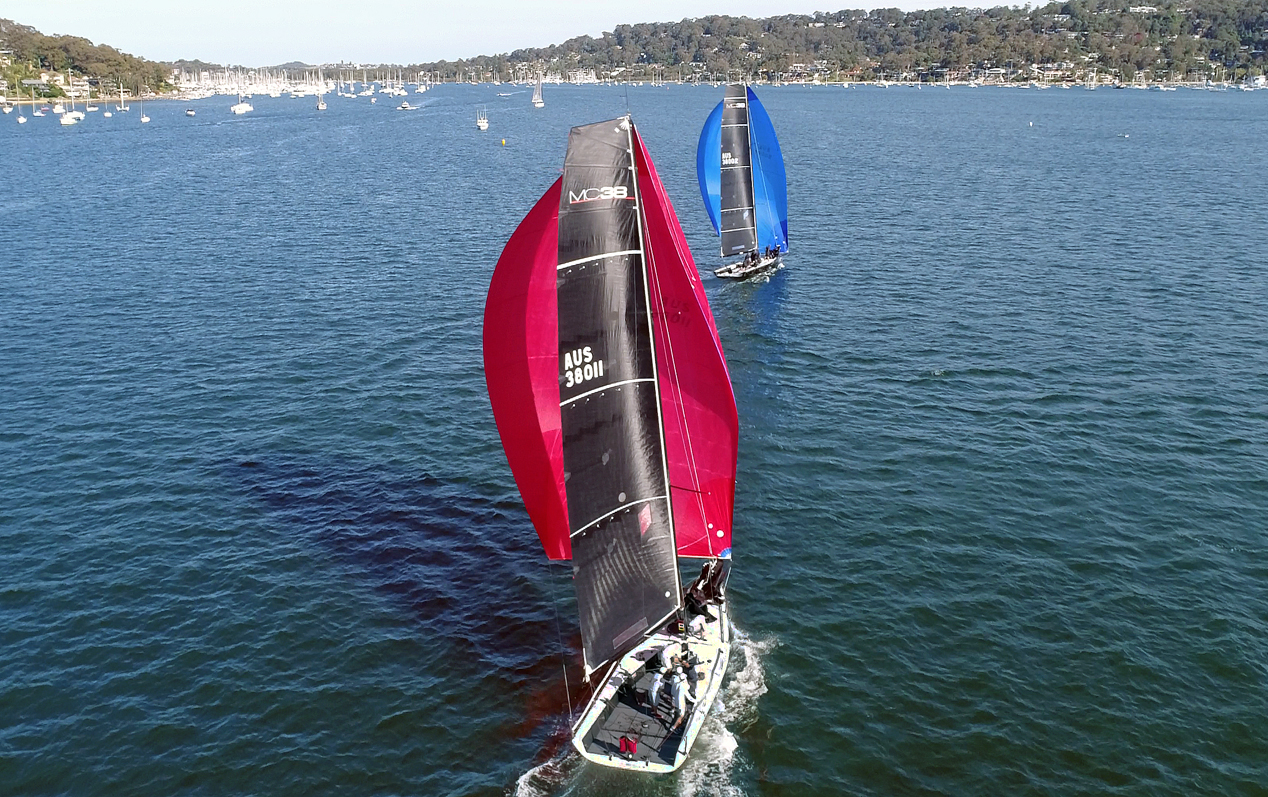 Neville Crichton’s Maserati, with the captain at the wheel for day two of the MC38 Winter Series, scored 3,2,2 on Pittwater which was just enough to triumph in the opening regatta of the class’ four-part winter pointscore.

This comes on top of Maserati’s Autumn Regatta victory three weekends ago on Sydney Harbour.

Leslie Green’s Ginger bounced back from Saturday and lodged two bullets in the sou’west winds 8-15 knots, moving them into second overall by a single point. John Bacon’s Dark Star had one of those Pittwater days and finished third in the fleet, two points off second.

Dark Star went close to being the catch of the day south of Longnose Point on Pittwater’s western shore when they skimmed past a small fishing boat at full stretch in the SW gusts piping out of Morning Bay. It was one of the more epic downhill runs in the best breeze of the regatta, the crew weight parked at the aft quarter as the bow threw up jets of salt water.

At the host Royal Prince Alfred Yacht Club the winning skipper Neville Crichton said, “We came to today second and any of the top three boats – us, Ginger or Dark Star – could have won it. It came down to the last race.

“We know what’s good for the boat but there’s still room for big improvement. I’m sure if we trained…. you are never as sharp as guys who go out regularly,” Crichton added. “As the season goes on we hope to get more time on the boat. We know we can win and if we can keep getting eight or nine boats every regatta it’s good racing.”

Chris Hancock of Vino wishes for every full step his team takes forward in terms of performance, the others were only taking half steps.  “Every time we take a half step forward, so do the others. We are back on the horse but we have some catching up to do in terms of finesse. It’s the odd mistake and there’s four to six lengths gone, then someone else controls the race.  We have a nice group of people, which is really important, and a good crew pool to call on. There’s enough going on to feel encouraged, and we have a plan.”

On the one design class newcomers Hancock says, “Chris Way is coming in, and fingers crossed Steve Barlow. They’ll refresh the class, and now Assassin’s on the market. They are great boats; highly specialised. They are not for Sunday picnics but I tell you what, you learn how to sail which I’ve really appreciated.

Moving forward Hancock also plans to support Australian class president John Bacon: “I’m at a stage now, personally and with my career, I think I can play more of a role in the class. John’s done a terrific job, and largely on his own.”

Steve Barlow’s Lightspeed rose above the tough crowd in race 5, tactician Seve Jarvin and the crew finding an edge and scoring the race win. In the final race 7 Barlow showed his quick reflexes when he threaded Lightspeed, with a kite up, in between two upwind boats screaming “starboard”.

For the June 17-18 regatta on Sydney Harbour out of the Royal Sydney Yacht Squadron the MC38 fleet will welcome new owner Chris Way and Easy Tiger. The July 15-16 regatta will be back on Pittwater.