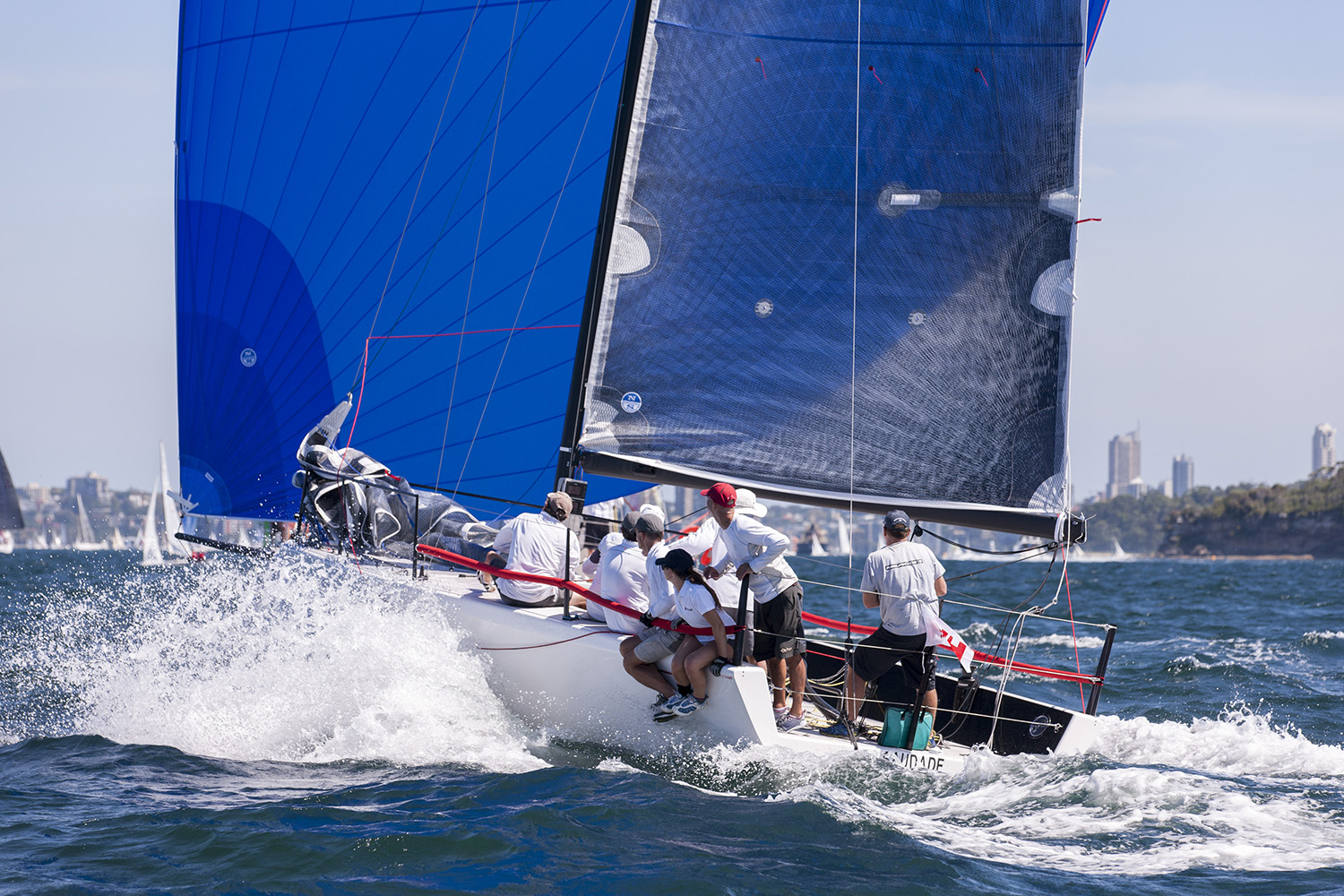 Following on from the MC38 one design program, McConaghy Boats released its smaller sister the MC31.

The intention of this smaller design is to reach an interesting market sector that the team at McConaghy’s have pinpointed as ripe for this type of yacht.

We took one out for a sail with yacht broker Andrew Parkes on Sydney Harbour and he was keen to dispel some incorrect preconceptions on my part. “This is not a sports boat,” he adamantly proclaimed.

“It is an ocean racing yacht with full Category 2 capability and inboard engine.”

When the MC31 was launched it first attracted attention for two reasons: flow on from the buzz of the MC38 fleet racing and the yacht’s specifications.

Most people took an initial look at the yacht and placed it in the sports boat category. With that in mind, a quick look at the yacht’s specifications had many scratching their collective heads. Compared to a sports boat it is heavy, over three times heavier. But with a fixed deep keel and 788 kilograms of ballast in the torpedo bulb, this is to be expected.

Although under ten metres in length (30 feet), this yacht can be raced in open ocean races up to Cat. 2. The additional options to upscale would cost under $5000.

In base boat mode however, with its fixed keel, inboard Yanmar eleven kilowatt engine (15 horsepower) and two bladed fixed sail drive, the MC31 definitely does not warrant being compared to sports boats.

Do not make the mistake, it is still an on-water weapon of excitement.

Sport boat popularity has certainly risen over the past decade with any number of available options out there for those not only desiring to go fast but also not have to pay for moorings or marina berths. For a lot of other people though, McConaghy reasons, they would like the sport boat thrill but in a more controllable hull form and with the added choice of being able to race out to sea and catch some sweet swells.

The MC38 showed this sector of the racing market had potential and they have taken the lessons learned and produced it in a smaller package.

Built in McConaghy’s Chinese factory, the MC31 is manufactured to the tough specifications that has seen this company build some iconic racing yachts. Using E-glass and a core cell vinylester resin construction it has been designed and constructed in accordance with the requirements of ISO12215 Category A.

When the MC38 was launched four years ago, McConaghy Boats intention was to establish an inexpensive racing yacht providing a thrill seeking boat owner with a performance racing yacht, simple to sail and cost effective via its class rules and racing.

The MC31 follows on from that ethos, but bringing the same high performance potential within the reach of the average club racer.

With no rating rule constraints McConaghy have designed a clean hull with good form stability due to its deep keel and high ballast ratio. This all aids in the philosophy of bringing an exciting day racer to the average yacht club crew. You do not need big numbers to race this boat and you do not need strong, young sailors to achieve your jollies.

Flared topsides with high freeboard and a low chine ensures the MC31 tracks well going upwind and sits steady and flat offwind. The imbalance the chine would create when heeled appears to be countered by quite a flat, wide and deep forefoot.

The benefit of having a nice big bulb nearly two metres under your hull means you can have a large sail plan to make this baby move without drag from the high aspect carbon fibre keel fin and rudder blade. As mentioned earlier the displacement of this yacht to a comparable sports boat is about 3 to 1, but so too is the sail plan.

What you end up with is a stable, easily driven hull platform with plenty of grunt to get it going and give its crew a wild but controllable ride. Do not get me wrong, it can still be unforgiving and you need to be on your toes on the tiller, but what a rush. More of that later.

On deck you can easily see the lessons learned from the builder’s involvement in Volvo Ocean Race, America’s Cup, TP52s and, naturally, the MC38. The deck is flat and flush, all lines are led below to keep the deck safe from tripping and ankle rolling. Even the asymmetrical spinnaker tack line is run inside the carbon fibre bowsprit. So too are the spinnaker sheets.

Another nice touch is the pitperson’s halyard clutches; they are all recessed into the cabin top to further reduce toe stubbing or accidental release.

Since the MC31 has potential for Cat. 2 classification the for’ard hatch includes a pneumatic pump to seal it when in any serious chop. This is standard whether you choose the Cat. 2 option package or not.

This is minimalist sailing with simple barber haulers and all mainsail controls centred just forward of the steering position at the mainsheet blocks, included with fine trim.

The traveller is behind the rudder stock and the boom vang is aft behind that. The idea being, during a downwind leg, the for’ard hand gets right aft with the runner winder/tactician and sits on the vang for safety.

The carbon fibre rig and rigging is standard from Southern Spars as are the carbon fibre elliptical stanchions. The two-spreader mast is in two sections for easy stowage and towing and comes with a standard mast jack for easy rig tuning on the day.

Given its high freeboard and low chine, the cockpit is large and deep for this type of yacht. Crew movement is easy on such a platform. All winches are a Harken package on the base boat. The instruments sit under the boom at the mast and are easy to read from the steering position about halfway along the cockpit.

We took Parkes’ Saudade out on Sydney Harbour in a cracking 15 knot nor’easter.

Taking the tiller I noted that there was no weather helm at all. It was twitchy to every shift or breeze intensity change but not like a sport boat. Slight gentle movements of the tiller are all that is required, a little extra puff an ease on the tiller and up it wound to about 33° of apparent wind angle and still easily getting over seven knots. Any more puff and you could poke her up for a bit of backwinding on the jib, gaining good height without sacrificing speed.

Once in the groove, sitting on the chine, it was a matter of looking around to check out the scene.

Downwind it demonstrated a bit more twitchiness; which you would expect from such a design. But, still easy to keep control. Once again, with only gentle slight tiller movements it was easy to catch the smallest of swells coming down the harbour.

What it would be like in a NE coming down the coast I can only dream and drool.

These boats have a tendency to have a reputation for being wet. You would think its ability to pneumatically seal the front hatch would confirm that status. But we hit many a ferry swell, not to mention quarter waves from passing maxi yachts out training for the Big Boat Challenge, with no white water coming back over the foredeck. I assume the extra bouyant foresection design, compared to big sister MC38, has mitigated a lot of this effect.

On paper you can see where the MC31 shines. The best true wind to boat speed ratio comes upwind in under ten knots.

She gets onto her favoured heel of 15° to 17° at around ten knots. Not unexpectedly, her fastest speeds in each TWS band is at 80° to 150° off the wind. Broad reach, maximum heel and you will hit over ten knots all day long with minimal effort on the helm and one great ride.

How does she rate?

Since the design brief was to target the weekend sailor who likes to go fast in a competitive fleet but with minimal hard work, how well does it hit that brief and what competition is it up against?

Certainly it is a great package that would suit a hyped-up bunch of gung-ho weekenders. It is easy to rig, easy to sail and a lot of fun while forgiving for any mistakes made. You could take non-sailing friends out without them getting in the way and have the ride of their life.

As to competition in the market there really is only one: the C&C 30. Australian Sailing has not yet tested this yacht so it will be interesting to compare performance and build standard.

One thing McConaghy’s do well however is in its attention to detail. All the built equipment is bespoke to suit the boat, not off the shelf. Carbon fibre rules on a McConaghy yacht, from rig
to stanchions.

There are also many other included items in its base boat package, the standout being the inclusion of a mast jack. Situated on a large internal box frame that includes the keel bolts and shroud attachment, when you go down below the rigidity of the structure is quite evident.

Being under the $200 thousand mark makes this an affordable alternative to paying an extra $50,000 to get a more standard production yacht. Sure you get more comfort but the MC38 and the rise in sports boats has shown there is a market out there for this interesting compromise.

If anyone is taking one outside Sydney Heads in a big swell – give me a call.