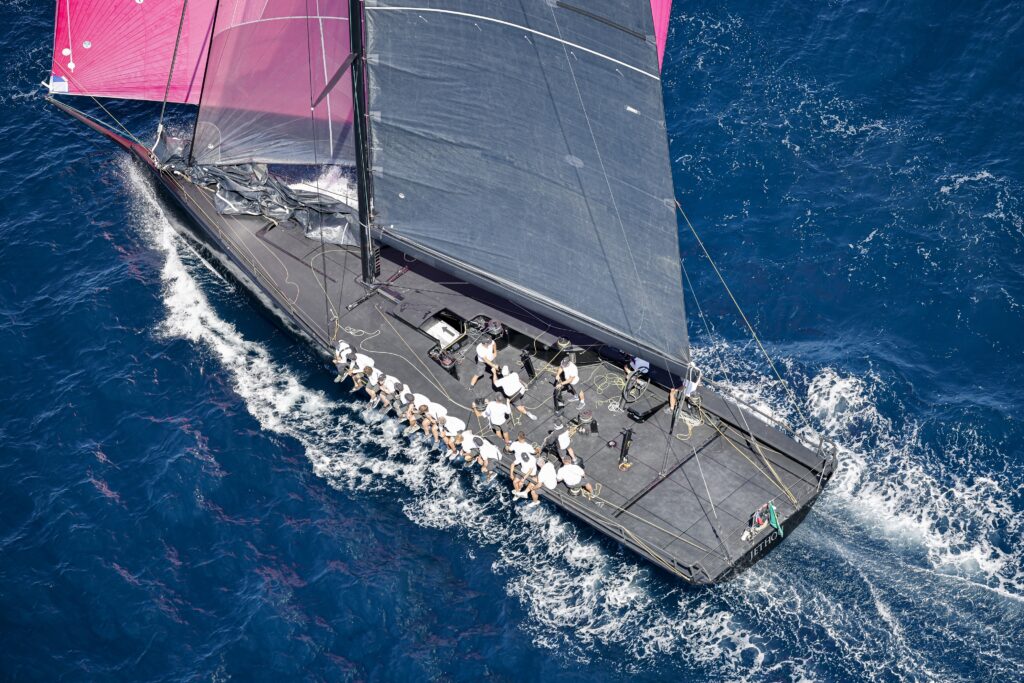 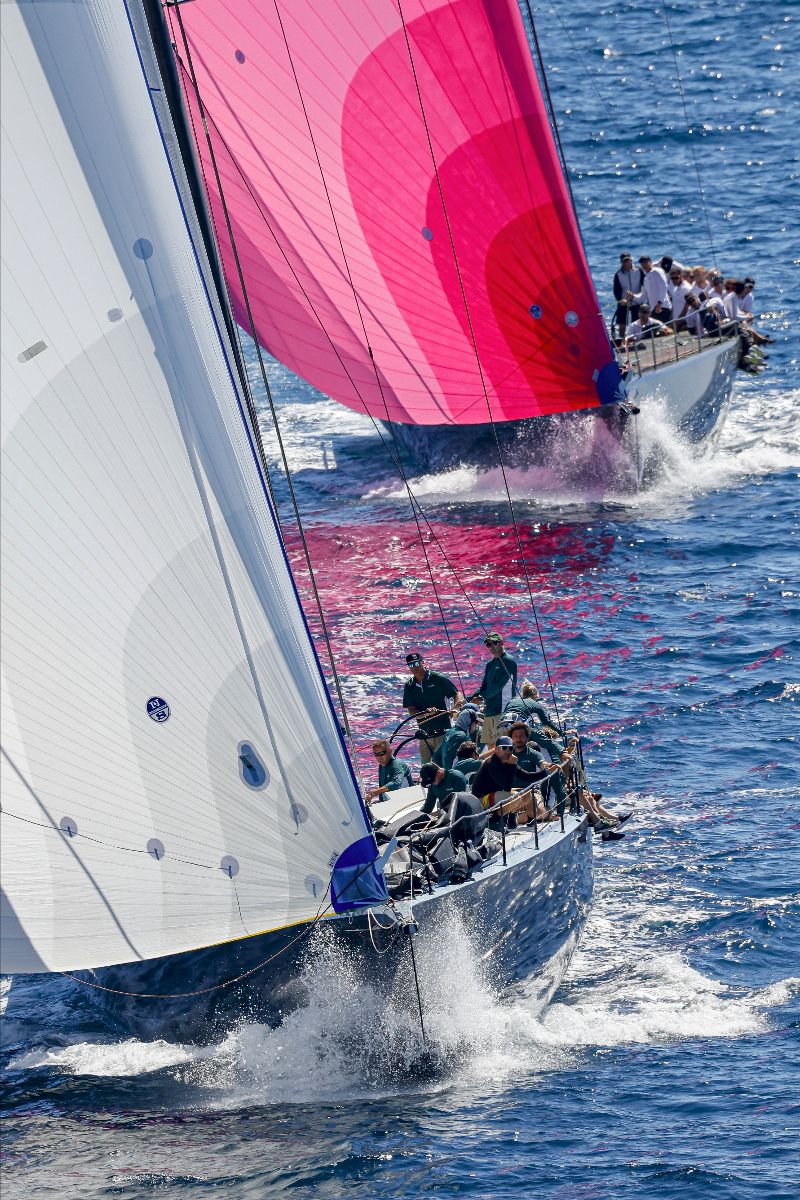 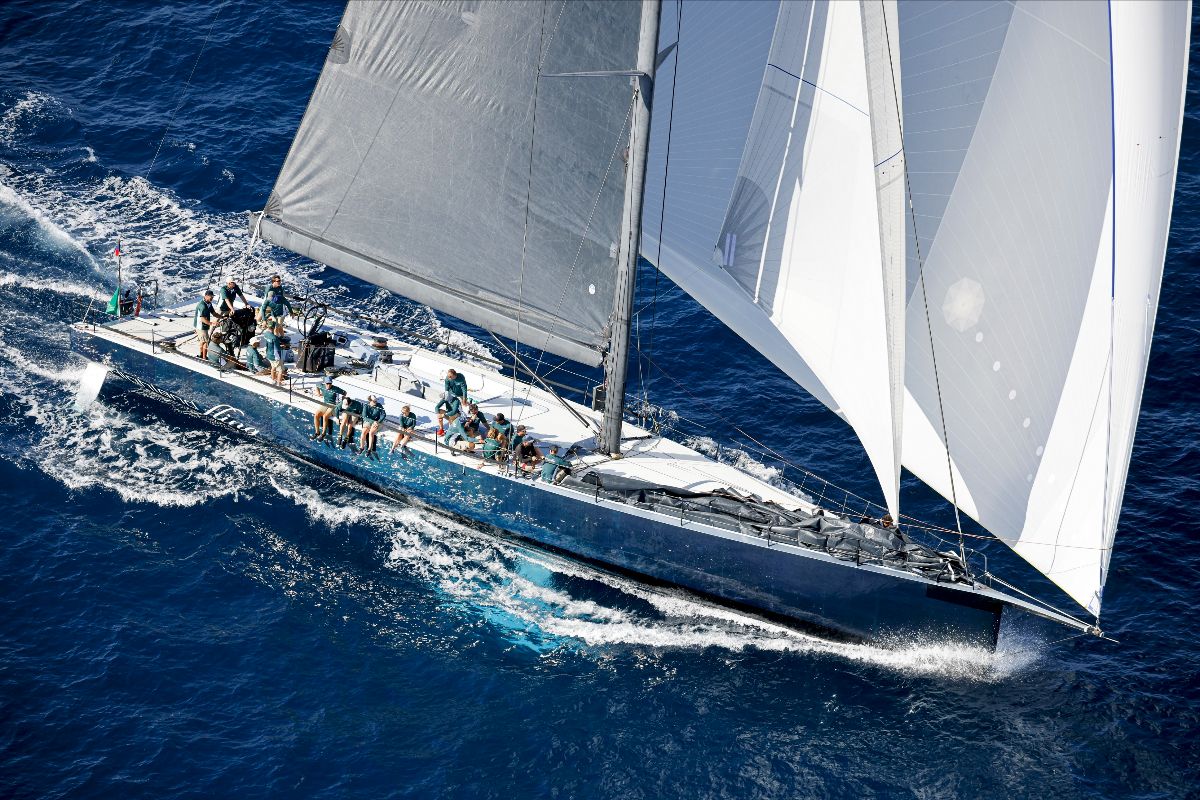 Italy: Racing in light conditions can often be boring and frustrating but for the penultimate day of the first ever IMA Maxi European Championship it was anything but – for spectators at least – with significant shifts, occasional shut-downs on a coastal course on a WSW-ENE axis deep into the Bay of Naples to the north of the Sorrentine peninsula.

After a delay ashore and then on the water, the race for the 21 entries got underway just before 1500 CEST with a short upwind leg in 10-11 knots. However, with all the boats crowded at the favoured committee boat end of the line, there was a collision between the two lowest rated boats – Giuseppe Puttini’s Swan 65 ketch Shirlaf and Matteo Fossati’s Sharkel 64 Stella Maris, both of which retired.

After the first upwind, there was a long leg into the heart of the Bay of Naples with a leeward mark off Torre Annunziata, at the foot of Mount Vesuvius. The lead trio of Lord Irvine Laidlaw’s Reichel/Pugh 82 Highland Fling XI, Sir Peter Ogden’s JV77 Jethou and Peter Dubens JV72 North Star arrived only for the wind to die. The longer Highland Fling XI just managed to escape the shut down and was a dot on the horizon by the time the new breeze filled in.

By this time several much lower rated yachts like Terry Hui’s Wally 77 Lyra and Alessandro Del Bono’s IMS maxi Capricorno had caught up. The new breeze filled in just as Philippe Ligier’s Wally 80 Ryokan 2 arrived and she was the first to round without stopping.

There was then a long fetch on starboard back to the southwest where there were options to go inshore or offshore with the latter seeming to pay.

The final leg back to the finish line off the host port of Sorrento was looking routine until the wind died just short of the finish line. With Highland Fling XI parked up just metres short of the line, Jethou came steaming in from offshore and appeared threatening and until she too stopped dead, the light current causing her to drift beyond the outer end of the line.

With the elegant black racer stopped and for many awkward minutes pointing the wrong way up the course, so the crew resorted to dinghy tactics and managed to ooch their giant maxi enough to propel it a few metres back up the course and then to finish correctly.

With the wind fading across the finish area and with the majority of the fleet looking like it would be unable to complete the course within the time limit, the race committee decided to halt the race. At this point all of Class 1 had finished along with Capricorno in Class 2. At a subsequent jury hearing it was decided to finish Class 1 and Capricorno at the finish line and the remainder of the fleet at the previous mark.

As expected the overall winner today across the entire fleet was Highland Fling XI but surprisingly by only 26 seconds under IRC corrected time from Jethou with Capricorno third, the resounding leader in her class. However overall North Star is now the leader from Jethou, having demoted Lyra to third.

Despite his yacht’s finish line acrobatics, Sir Peter Ogden said he had otherwise enjoyed the majority of the race. “It was only difficult at the end. The rest of it wasn’t that bad. On the first leg we held our time. On the second leg they brought the wind down. The next one we extended the time again…

“The end was interesting. We got trapped so we had to rock the boat. We ran to the other side, and it crabbed forward, and we got around the buoy!” Not something you need to do every day in a 77ft long yacht. “The top mark was difficult because there was no wind there. We parked there for what seemed like a long time.”

Jean-Pierre Dreau, owner of the elegant Marseille-based Mylius 60 Lady First 3 was resigned to the outcome: “The sailing was quite good, but the race was a little bit too long.” Regarding the conditions he added: “It is the Mediterranean: you have wind, you have no wind, you have different wind. That is what’s normal here.”

His tactician, well known IMOCA sailor Christopher Pratt added: “The downwind was really interesting with good strategic calls to be made, but we stayed offshore, and it was clearly better to be on the shore. On the way back we made a few tacks to find more pressure and right shift. Then at the finish off Sorrento there was no wind at all for us two miles from the finish.

“It is always easy to say after the race that they should do ‘xyz’. The PRO tried to do his best, but the wind died really quickly at the end. No one was thinking when we rounded the last mark that it would die off Sorrento.”

Tomorrow is the final day of the IMA Maxi Europeans.