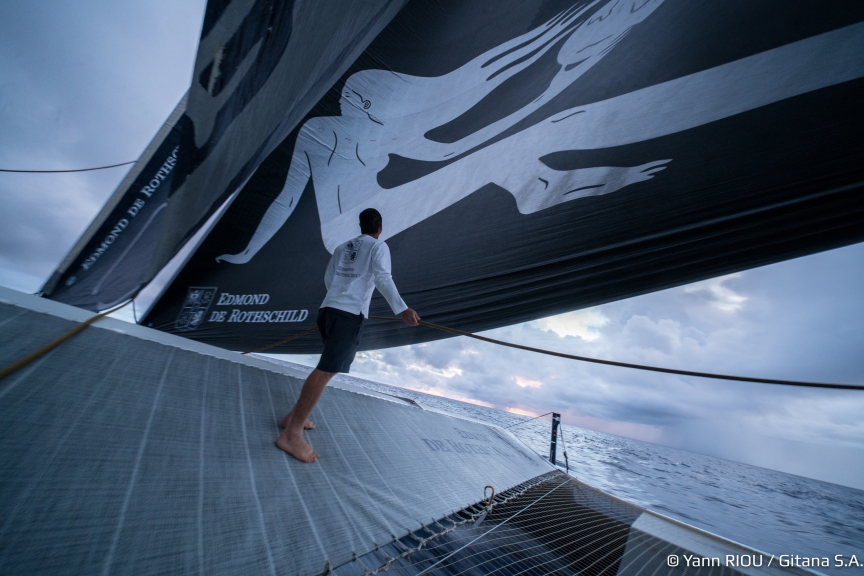 On 7 May 2018, the Maxi Edmond de Rothschild left Gitana’s new base in Lorient after her first four-month winter refit, which was primarily geared around making her systems reliable. Together with Cyril Dardashti, the team’s director, Sébastien Josse had come up with a pre-season sports programme based around two transatlantic crossings. These 6,000 miles were designed to build up towards the exercise of sailing the multihull singlehanded offshore.

However, the rather unfavourable weather of this late spring has forced the skipper of Gitana Team to review his programme in order to adapt the preparation for the Route du Rhum – Destination Guadeloupe as best as possible.

No matter though, the playing field is vast and there are multiple options between now and 4 November 2018. The most important thing is to keep up the great momentum that has coursed through the five-arrow team during the fine-tuning of the Maxi Edmond de Rothschild since she came into this world nearly one year ago.

Sailing is a mechanical sport where technical skill and technology have a key role, more so today than ever before. Nonetheless, it remains a discipline where the athlete has to constantly deal with the natural elements of the sea and the wind.

“We have to always work around what the weather dishes out! Since our relaunch, it hasn’t really been spoiling us. Over the past few weeks we’ve been in the warm sector of a low pressure system. From the Ukraine across to Brittany, you could see a massive zone of high pressure stretching out, creating a genuine barrier for all the low pressure systems. The Azores High hasn’t been playing its usual role over recent weeks, instead getting wedged over the Canaries instead of the Portuguese archipelago. These weather conditions clearly weren’t favourable to the record/Atlantic crossings we envisaged in our preparation,” explained the skipper of Gitana.

“The idea isn’t to make the crossing in 10-15 knots of breeze… to progress with our fine-tuning, we need to put the Maxi to the test. We’re looking for 4-5 day phases where we can push the boat in medium to strong conditions (25-35 knots of breeze), but up till now this configuration hasn’t been on the cards. Rather than sitting idly by, we’ve decided to modify our programme.”

“We knew the timing was tight and everything had to link together nicely. Unfortunately, we simply don’t have the time now to do this return transatlantic as we have some very long-standing in-house plans with the Edmond de Rothschild Group kicking off in early July.

“Instead, the following weeks have to be dedicated to technical matters in Lorient, but we have progressed with the work first envisaged such as taking out the foils for a thorough check-up and reprofiling. As such the summer’s going to be really open for getting out on the water, in the hope that the weather will play ball this time!” added Cyril Dardashti.

On 4 November, offshore of Saint Malo, there will be six boats setting sail in the legendary Route du Rhum in the Ultime category. In the meantime, there are few confrontations scheduled between the Maxi Edmond de Rothschild and her adversaries.

“The desire’s not lacking, but we have all our refit and agenda constraints to reckon with. In sporting and technical terms, we’re on very different levels in our preparation. Boats like Sodebo Ultim’ and Idec Sport are highly optimised and today they also benefit from all the technical experience amassed by their respective skippers. They’re not exactly in the same phase as us regarding fine-tuning and improving of reliability… Macif is in refit for a few more weeks yet, as is Banque Populaire! This phase of sailing together is more likely in September or October should the opportunity present itself. Otherwise, we need to wait until early November offshore of the Breton coast,” says Sébastien Josse, not without some impatience.

However, before this main event of the 2018 season, the five-arrow team has a lot to do. Racking up miles offshore, taming the machine, getting in some practice and going through the moves umpteen time in every possible weather scenario so that they become second nature… Every year, it’s the same old song, but the tune differs given how unique each boat is. This is particularly true for the latest addition to the Gitana fleet.

“To build Gitana 17 we set out from a blank page and less than a year after the launch of the boat, I’m not ashamed to say that we’re still in a phase of discovery. This discovery doesn’t relate to the boat but rather the fine-tuning and the tweaking of all the on-board systems, the complexity of which is equal to the ambitions and promises synonymous with sailing this 32-metre giant”, points out Cyril Dardashti, the director of the team.

In other words, though Gitana Team hasn’t been making much noise for the past few months, it is busy working… “Within Gitana, we are still in a technical ‘quality control’ phase after a winter refit guided by the experience acquired in the Transat Jacques Vabre. Each time we go out on the water, whether it’s for a few hours or a few days, we have a precise jobs list to implement. Some of the outings can be based on a theme (sails, appendages, electronics…) but generally every domain is reviewed. You have to go about it point by point without cutting corners! The sports phase will follow, we just need a little patience,” explained the skipper.

“These new, big oceanic multihulls force us to be a lot more rigorous. The preparation is methodical. Naturally, Banque Populaire’s capsize back in April gives you pause for thought! We know that our discipline comes with certain risks, and that one in particular. It’s an alarm bell which reminds us of the reality of sailing a multihull singlehanded… particularly as it’s something I lay real stress on.

“However, these new boats are propelling us into another dimension. To date, there are just two in existence and as a result solely Armel (Le Cléac’h) and myself understand the stresses these latest generation machines are under in practical terms. And we’re still only at the beginning of our journey! We’re trying out a number of things and we’re discovering new features every day thanks to this phase of fine-tuning, which is very intense and thrilling above all!”