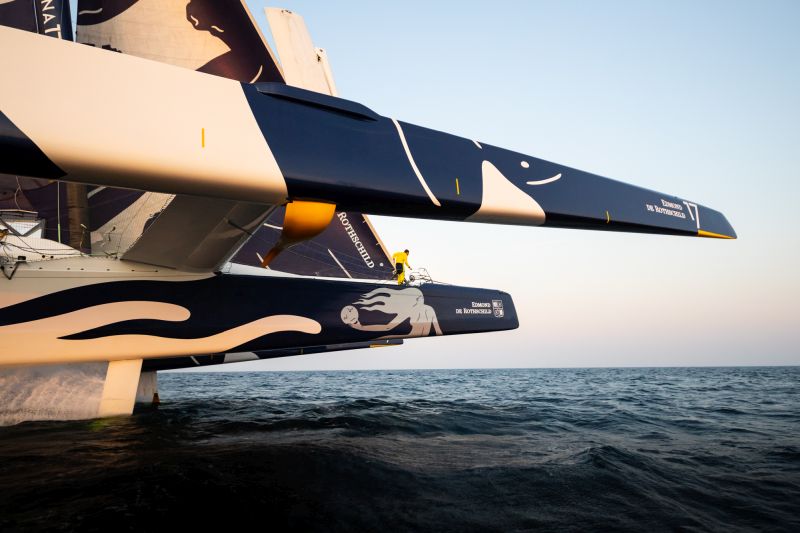 Lorient, wednesday, September 23, 2020 – This figure has been on everyone’s minds for many months now; 40 days (23 hours and 30 minutes), is the exact time to beat if the crew of the Maxi Edmond de Rothschild is to topple Francis Joyon and IDEC Sport, the current Jules Verne record holders. It’s also the time that Gitana Team has left before it officially commences stand-by for its first attempt at the Jules Verne Trophy.

Indeed, from 1 November, it will be all systems go to take on the challenge of the round the world record under sail, which the skippers of the latest addition to the Gitana fleet describe simply as the outright round the world.

However, this same date will herald the start of a new ‘race’ to pinpoint the optimum weather window to extract themselves as quickly as possible from the Breton coast and, on a larger scale, the North Atlantic. In the meantime, true to form, Franck Cammas, Charles Caudrelier and their crew are tirelessly rehearsing for the big day and making the most of the current autumnal conditions to put their 32-metre giant through her paces offshore.

“The Jules Verne Trophy is a technical marker of our time. The fact that the rule is open means that we can set sail with the best boat a human is capable of creating today,” explains Franck Cammas. In the eyes of the Gitana Team, that boat today is the Maxi Edmond de Rothschild. Whilst the five-arrow giant is – already – in her fourth season and has raised her game once again following her winter refit, the time seems right for her to set sail on her first round the world.

Launched in 2017, Gitana 17 paved the way for a new generation of maxi-trimarans. Boasting the catchline “aiming to fly around the world”, the Verdier design, created and designed to navigate the open ocean, was really setting the tone from her opening tacks.

Fine-tuning and breakage coloured the first few years of this incredible machine’s journey as it naturally takes time to spearhead a technological breakthrough. However, with the support of Ariane and Benjamin de Rothschild, the team has managed to take the challenge by the horns and overcome these difficulties.

“The Brest Atlantiques was a very steep learning curve and we managed to make the most of the winter refit, which was unfortunately longer than planned, to continue with our optimisations to the platform and the systems. There’s not one particularly spectacular change aboard the boat, but at this stage of the performance it’s the little things that create big advances.

“Our gains in speed are really quite considerable now! It feels as if the boat is really sound. In fact, flight brings with it safety, even though we’re constantly sailing at very high speeds. In record mode, we’re also benefiting from our first servo loop, which is an unquestionable asset. Finally, we’ve placed particular emphasis on the aerodynamics with the addition of new fairings around the boom, the cuddy and also the forward trampolines,” explains Charles Caudrelier.

All the ingredients for a successful round the world

40 days 23 hours and 30 minutes… Francis Joyon and his crew have held on to this incredible trophy since 2017, halving the first Jules Verne Trophy reference time, which was set back in 1993. However, this fabulous performance simply adds to the appeal of this legendary record, stirring up envy in the process.

Well aware of the epic proportions of the record they’re preparing to hunt down, the sailors who make up Gitana Team cannot conceal their glee at the prospect of achieving a sub-40-day time.

“The current record is a monument and the performance achieved by Francis Joyon and his men really isn’t easy to beat, but that is what makes the challenge so exciting. We know that we have to really push the envelope on an individual basis to pull off a collective performance. In our attempt, there are lot of elements that have to come together. Some of them we have control of and others less so!”

“We can sum up the key ingredients required to beat the record in three main steps. I’d say that the first relates to the boat’s performance, reliability is second and then the weather to finish.

“With regards to the Maxi, we’ve reached the level we’d set for ourselves, which is a good thing. In terms of reliability, the team has done a lot of work in this area and now it’ll be down to us to try to strike a balance and, as a result, manage the boat over the course of a long challenge.

“The weather may well be the most random aspect in this story. In 2017, Francis reaped the benefits of an incredible weather window, which they really managed to make the best of. During my Trophy campaign with Groupama 3 in 2010, we didn’t have great weather and that’s still a source of frustration even now, despite the fact that we improved on the record time,” recalls Franck Cammas.

For the analysis and the weather strategy, the crew of the Maxi Edmond de Rothschild will be able to count on the great expertise of Marcel van Triest. The seventh man aboard in truth, the Dutch router holds all the cards. Not only is he completely familiar with the skipper pairing at the helm of the Maxi Edmond de Rothschild, managing to provide them with excellent support during their first major victory aboard Gitana 17, but the Jules Verne Trophy course no longer holds any secrets for him and he is also the current record holder with the men on IDEC Sport.

The human factor at the heart of the Jules Verne Trophy

Very early on, the Cammas – Caudrelier pairing decided to put together an entourage of four sailors to form a group akin to that gathered together in support of Francis Joyon in 2017 during his victorious attempt.

Today, this group is virtually complete, albeit for one name. At the end of the latest session of offshore navigation over several days, the skipper of the Maxi Edmond de Rothschild will announce their final choice. In this way, the grand reveal of the full line-up will take place in early October at the latest.

“A round the world is no mean feat and there’s a very strong human dimension in this exercise. The fact that we’re one of the first of this generation of flying boats to take on this record inevitably adds a sense of adventure to our story,” admits Charles Caudrelier.

Well-versed in crewed round the worlds, notably with two victories to his credit in the Volvo Ocean Race, the skipper will however be setting sail on his very first Jules Verne Trophy, as is the case for Morgan Lagravière and David Boileau.

The first is known and acknowledged for his incredible feel for the helm and his acumen with regards getting a boat making fast headway. The second is one of the mainstays of the Gitana Team, of which he has been a part for over ten years. The boat’s strongman, crew and an extraordinary technician, David Boileau is the boat captain on the Maxi Edmond de Rothschild.

Though they hail from very different backgrounds, the two sailors have a number of things in common: they both share a passion for anything that flies, they’ll both be on watch together in the round the world and they’ll be contesting their very first Jules Verne Trophy. So here we have the boat’s rookies presented to you via this quick profile comparison!