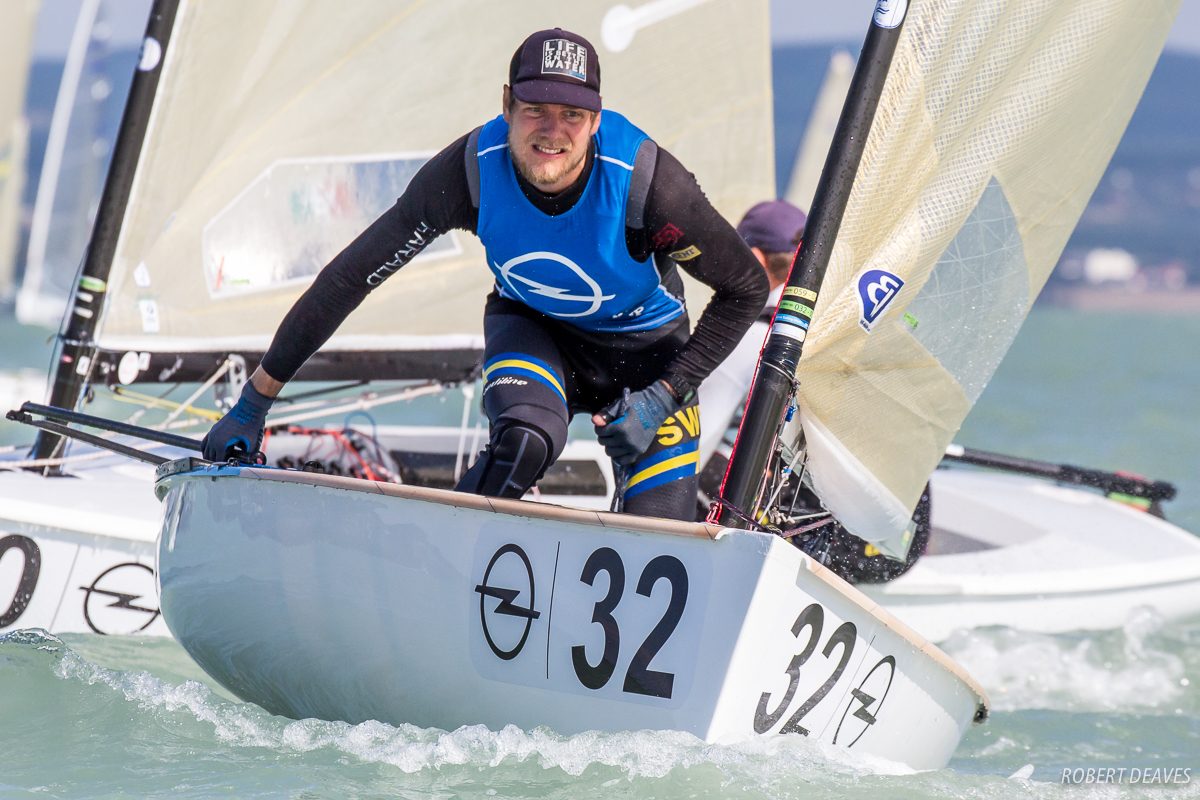 Max Salminen, from Sweden, is the third leader in three days at the Opel Finn Gold Cup at Balatonföldvár on Lake Balaton. The ever-tricky wind caused a few more high scores, while a few of those at the top maintained their consistency. Ed Wright, from Britain, moves up to second with Nicholas Heiner, from The Netherlands, who won the first race of the day, in third. Piotr Kula won the second race.

Both races on Day 3 were started under black flag as the fleet seemed overly keen to get the racing underway. Race 5 was a left hand favoured course with most of the fleet heading out towards the eastern shoreline of Balaton to get the best wind. Heiner led round the top mark from Milan Vujasinovic, from Croatia, and Ioannis Mitakis, from Greece. Heiner pulled away downwind and was never really threatened to record his first win of the week in his first Finn Gold Cup.

However the battle behind him was pretty intense, with lots of place changes. In the end Jake Lilley, from Australia, came through for second ahead of the British pair of Henry Wetherell and Wright.

The wind was starting to drop as Race 6 was started, but Oscar was raised at the first top mark as the wind returned. Some heavy cloud came down the lake threatening rain, but the day remained dry.

Lilley continued his good form by leading round the top mark in Race 6 from Kula and new U23 World Champion, Oskari Muhonen, from Finland. The first downwind was kind to Kula who pulled ahead as the wind died again to around 6-7 knots. He maintained his lead to the finish, though was pushed hard on the second downwind by Muhonen and Lilley. Heiner came through in the last stages of the downwind to round the find, shortened, downwind mark inside Lilley to take third.

“Slowly getting into the event and today was a really nice day. It was decently steady for Balaton. We’ve had three great day’s sailing so far, and not really what we expected from Balaton. But so far, so good.”

“I spent the first two days trying to get the feel of the leverage with the big fleet and today I got a bit more into that. In the end I think it’s just about winning your side and keeping an eye out for the other extremes and see how they go.”

“Today with the second race, it was quite tricky. The big cloud came over, so I just had a plan. It’s always a tricky one. Do you go for a side and get the leverage or do you start out of the middle and just play the fleet? And that changes race by race.”

“You always have a plan, but if you see something starting to happen then at least you need to have the possibility to come across and make something decent out of it.” In the second race, “Even two minutes on port trying to get back to the right, made a huge difference at the top mark.”

Kula stays in fifth place, discarding his 68th in the first race today.

“I didn’t do well out of the first black flag start today and messed up my race, but wiped my tears away and won the second race.”

In the second race, “I was expecting the left would pay better than the right, but the crowd on the pin was so big, I found a more empty spot on the line and tacked quickly and then I played the shifts and was second at the top.”

How did he turn a disastrous first race into a win in the second?

“I actually started preparing for the second race in the first one. At the second top mark in the first race I was thinking this is hopefully my worst race so the best I can do now is to focus and gather my thoughts and sail nice downwind to set my mind for the next race and this is what I did. I just focussed on myself, focussed on the waves, surfed nicely and basically on the finish line I swallowed this bitter pill and just focussed on the next one.”

Salminen had the third best day of anyone on the water and takes a four-point lead at the top.

“Another good day for me. I am happy to be up there in almost every race so far. That’s what I wanted to do. It’s not about winning races, just about dodging those bullets that can get really hairy in a fleet of 113 boats.”

“It’s hard to manage to risk out there especially when you don’t really know what you are going to get. So far the left has been paying, but on the second race today almost all the guys at the top came from the right, so it’s hard. I think speed is your only weapon that will always be there, so good speed and good starts for sure.”

Finn sailors have many challenges when racing in Gold Cup fleets, but Mikael Hyrylainen, from Finland, had a rather unique challenge today, trying to get a snake out of his boat between races. Loitering somewhere in the depths of his boat for the first race, his slithery friend, named Frank, made an appearance and it took Mikael some effort, balanced on the foredeck, to force the snake back to the cockpit, where he was duly dispatched back into the Balaton depths.

As the sailors came ashore lake became windless for the first time since the event opened. Racing is scheduled to continue at 10.00 Thursday, but some forecasts would indicate a delayed start is possible.

At the half way stage there is no clear leader. Finding the 2017 Finn World Champion could turn into one of the most interesting battles yet. There are plenty of snakes to slide down and ladders to climb.