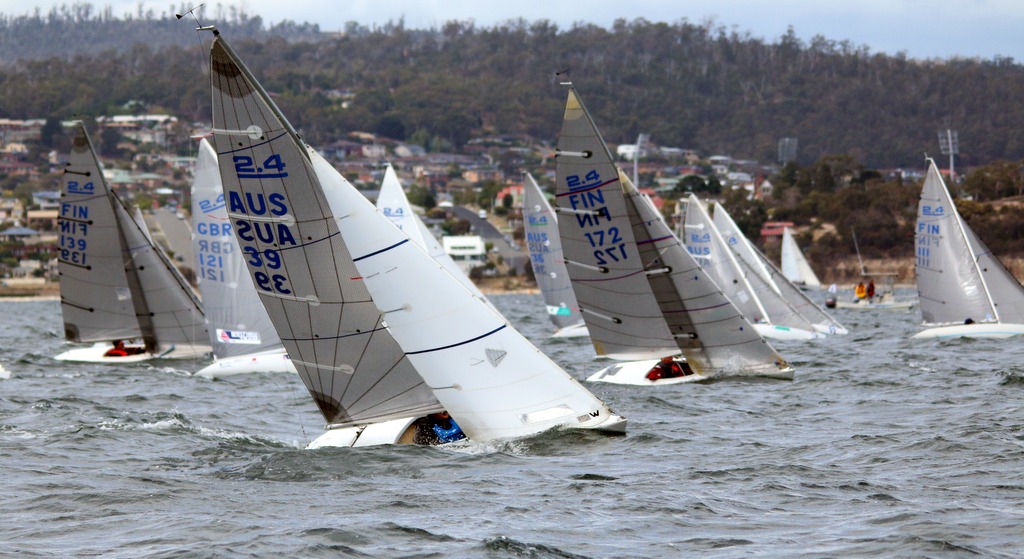 Tasmanian Matt Bugg is overall leader in the Australian National Championship for the International 2.4mR class after day one of racing today on Hobart's RIver Derwent.

The fleet of 29 yachts sailed in a fresh but chilly southerly breeze with Finland's Janne Laine narrowly beating Bugg in the first race.

Bugg dominated race two, with  Laine placing third, giving the defending Australian champion a one-point lead over Laine, one of 12 Finnish sailors contesting the Nationals and then next week’s World championship.

29 sailors, both able-bodied and disabled from Australia, New Zealand, Great Britain and Finland are contesting the Australian championships leading up the Open World Championships.

Third overall after day one is another Finnish sailor, Jan Forsbom who had two fourth places,  while fourth is Australian Michael Leydon from Canberra with an 8-2 score.

Prominent British disabled woman sailor Megan Pascoe sailed a good race for third in race one,  but slipped to ninth in race two and is sixth overall.

A third Finnish sailor, Pauli Immonen, is fifth overall with a fifth and sixth today.

Finland has the largest fleet of 2.4mR class boats,  single-handed keelboats which are sailed by both able and disabled sailors with these Australian and World championships on the Derwent open to both.

The class is also one of three boats to used in the sailing at the Rio Paralympics,  with Matt Bugg expected to again be nominated to represent Australia.

Six sailors in the Finnish contingent are in the top ten placings after day one of competition.

Racing continues on the River Derwent tomorrow leading up to next week’s World championship.