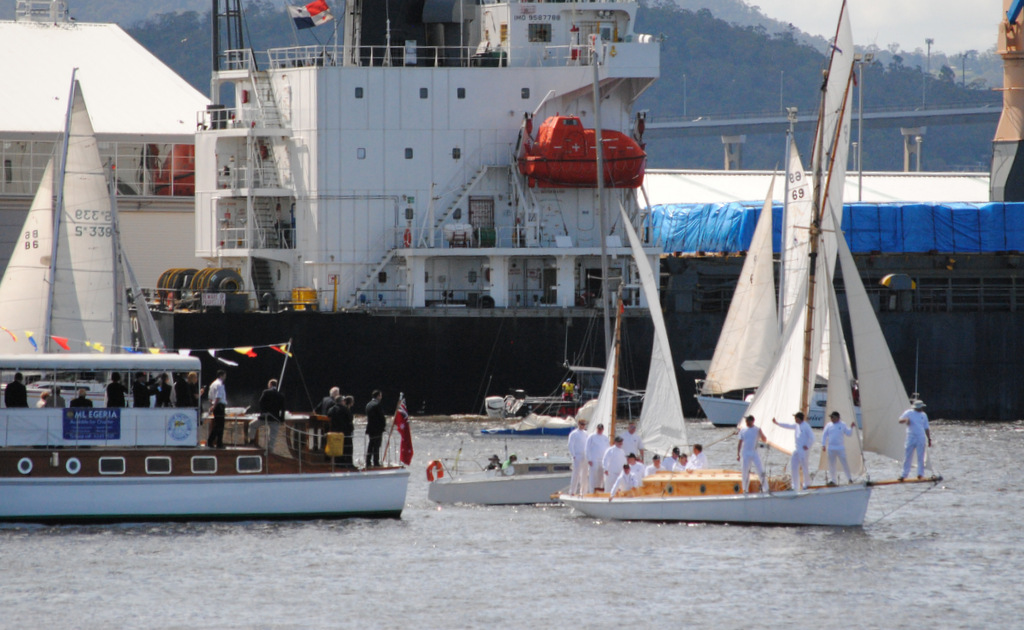 Hobart boat owners, their crew and families celebrated the Opening Day of the 136th Yachting Season the River Derwent today with a massive fleet of more than 250 craft saluting the Governor of Tasmania,  Professor Kate Warner, in a spectacular sail past in historic Sullivan’s Cove.

“At least 250 boats on the water…on a perfect spring afternoon,” confirmed race officer ‘Biddy’ Badenach whose task it was to dispatch the huge fleet in line astern for the Sail Past from off the Regatta Grounds into Sullivan’s Cove and past the Governor aboard the classic motor yacht Egeria.

Veteran yachtsmen agreed it was the largest fleet for an Opening Day Sail Past in many years and reflected the ongoing growth of yachting, sailing and motor boating on the Derwent with craft from the Royal Yacht Club of Tasmania, Bellerive Yacht Club, Derwent Sailing Squadron, the Cruising Yacht Club of Tasmania and the Motor Yacht Club taking part.

The sailing craft ranged from Laser dinghies through to ocean racing yachts and included several notable veteran yachts,  such the classic yawl Gipsy, now into her second century of sailing in southern Tasmania.

Bellerive Yacht Club Commodore Graeme Mansfield headed the fleet in his yacht Black Magic,  the crew standing to attention on the starboard side as they passed Egeria to port, as stated in the sailing instructions.   Also aboard Black Magic was Paralympic silver medalist Matt Bugg.

Close astern came the dinghies, Lasers and one Sharpie, before the procession of yachts, some under full sail, others motor-sailing, many ‘dressed ship’ with colourful flags and pennants. The large contingent of boats from the Motor Yacht Club brought up the rear.

Because of the angle at which Egeria was anchored in Sullivan’s Cove the yachts that followed Black Magic chose to leave her to starboard – a wise decision that avoided possible chaos with yachts forced to tack close to Egeria.

Opening Day ended with an estimated 200 boats anchoring or rafting up to celebrate the upcoming summer of sailing off Nutgrove Beach at Lower Sandy Bay.

Sunday it’s down to business for many crews with more than 50 yachts entered in the Channel Race, the first event in the Combined Club Long Race Series.  The forecast is for fresh to strong north to north-westerly winds on the Derwent and in D’Entrecasteaux Channel.

Opening Day of Yachting Season for 2016-2917 was a brilliant spectacle, the 250 craft (or more) a vast increase from the 15 yachts that took part in the original Sail Past in 1880.  The sport of sailing in Tasmania has come a long way in 136 years.