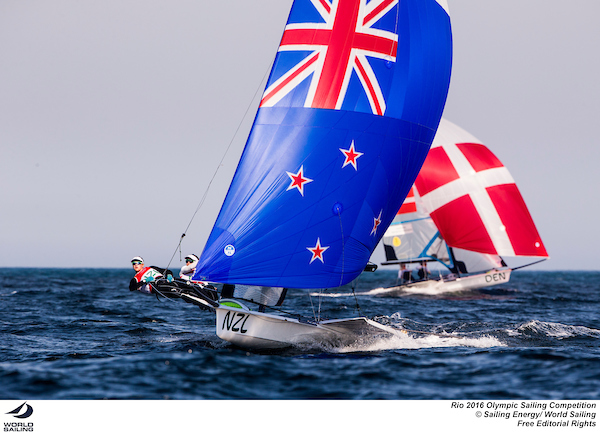 Like most of the women's events at the Rio Olympics, the 49erFX was a close and exciting contest. Three crews were tied on 46 points going into the medal race and a fourth was just a point behind.

Three of the four teams have won a 49erFX World Championship, the odd ones out being the Danes who have a European title. Only one of these eight sailors, Spain's Echegoyen, knew what it feels like to be Olympic Champion. She beat Australia's Olivia Price for Gold in the Women's Match Racing four years ago.

The IOC loves medal races like this because they are easy for the public to understand – winner takes all.

Denmark, Spain and Great Britain made things hard for themselves at the start, messing around at the boat end. But the Kiwis down on the pin had no problems and shot into the lead.

Denmark and Spain were working each other over and Brazil and New Zealand said, “Thank you very much.”

At the top mark Italy and New Zealand rounded together with Brazil seven seconds behind. Denmark had recovered from the shenanigans to be fourth while the Spanish were in trouble down in eighth but only 19 seconds off the lead.

A course change was signalled at the bottom gate and New Zealand and Italy headed back up with a healthy 21 second lead over Brazil. Denmark was still fourth, in Bronze medal position.

The British capsized, but that didn't affect the result. New Zealand and Italy had gone separate ways and Italy's left-hand track had proved better. At the mark it was Italy, New Zealand, Brazil, France and Denmark. Spain was sixth, just six seconds out of Bronze.

By the bottom gate Brazil had closed to within 5 seconds of the Kiwis and this was the battle for Gold. Behind them Spain had moved a fraction closer to Denmark.

Brazil went up the left and the Kiwis let them go, preferring the right. When they tacked for the mark it was going to be close but the Brazilians on their home waters had picked it best. They had a 10 second buffer.

The Kiwis threw everything at it on the run but that failure to cover had cost them the Gold. Brazil did a late gybe right on the line and crossed just two seconds ahead. Brazil had their Gold and the Grael family had even more trophies to display.

A horde of Brazilians dived off coach boats and swam out from the beach. Understandably, the security guards let them go. Eventually the skiff was beached and the sails were dropped then the ecstatic crowd carried the boat, with Martine and Kahena standing up in it and waving, up the beach to a place of honour. Brazil had their finest moment of the Games and no other news will get a look in on local TV.

Denmark held off Spain for third.

Comments from the sailors to come.