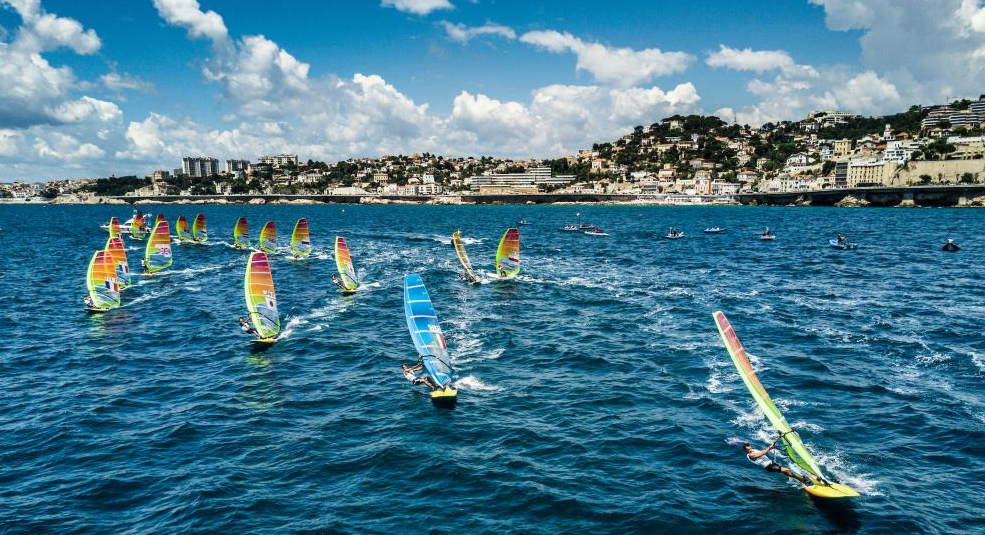 The Series started in Enoshima, Japan, the Tokyo 2020 Olympic venue, in September 2018 before moving to Miami, USA in January 2019 and, most recently, Genoa, Italy in April. Top-ranked sailors are in attendance across the respective fleets, with racing scheduled to commence on Tuesday 4 June. Medal Races on Saturday 8 and Sunday 9 June will bring the 2019 Series to a close.

A fight for Gold is on the cards in the Women’s RS:X with strength evident in the fleet of 27.

Lilian de Geus of the Netherlands comes into Marseille as the one to beat. The Dutch sailor won gold at the Hempel Sailing World Championships Aarhus 2018 and recently added the European title to a growing collection of honours.

At the 2018 World Cup Final, de Geus missed out on gold by a single point to Noga Geller. The Israeli won the Medal Race and de Geus finished in sixth, demoting her into silver medal position. De Geus is back in Marseille, bidding to add the Hempel World Cup Series title to her list of achievements.

The Women’s RS:X fleet features many leading competitors aiming to halt de Geus’ run of success. Geller returns to defend her title and France’s Rio 2016 Olympic champion, Charline Picon, will race on her home waters as she continues her preparations for Tokyo 2020.

Olympic medallists Bryony Shaw (GBR) and Stefania Elfutina (RUS) will sail in the fleet as well, ensuring that whoever walks away as the Women’s RS:X Hempel World Cup Series Champion would certainly have earned the right.

In the Men’s RS:X, 32 competitors will battle it out on the Marseille waters.

The 2018 edition of the Final saw the French dominate on their home territory; Pierre Le Coq took the title and was followed by Thomas Goyard and Louis Giard for an all-French podium.

Although Goyard is not sailing in 2019, Le Coq and Giard will certainly be frontrunners for the title. In the lead-up to Tokyo 2020, the French pair has fought each other hard for the single spot at the Olympic Games. The qualification process between the pair continues to heat up so they’ll both be aiming to assert themselves in Marseille.

The 26-boat Nacra 17 fleet features many of the leading lights of the class.

Ruggero Tita and Caterina Banti (ITA) have kept the World #1 spot in the Nacra 17 since August 2018, and the pair is worthy holders of the title. They were convincing winners at the 2018 World Cup Final and come into the event as one of the favourites for Gold.

The Italians narrowly missed out on a medal at the recent European Championship in Weymouth, Great Britain, as Ben Saxton and Nicola Boniface (GBR) claimed the title. Though Saxton and Boniface won’t be in Marseille, their compatriots and European silver medallist John Gimson and Anna Burnet are part of the fleet and will be eyeing a podium spot.

Four-time Nacra 17 world champions, Billy Besson and Marie Riou (FRA), continue to combine sailing the foiling Olympic multihull along with competing in SailGP as part of the French team. They will lead the for four French teams aiming for Tokyo 2020 before heading over to New York later on in the month for the third race of the 2019 SailGP season.

The Men’s 470 also has a fleet of world leading sailors. Since forming their partnership in December 2012, Mat Belcher and Will Ryan (AUS) have featured at World #1 for 46 World Rankings releases. Wherever they sail, they are viewed as potential gold medallists, so it is no different in Marseille.

Sweden’s Anton Dahlberg/Fredrik Bergström, France’s Kevin Peponnet/Jeremie Mion, Spain’s Jordi Xammar./Nicolás Rodríguez and the five-team Japanese squad all have what it takes to beat the Australians, which will make for an intriguing week of racing.

The 24-strong Open Kiteboarding fleet will feature for the first time during the 2019 Hempel World Cup Series, with several big names set to compete.

Hempel Sailing World Championships 2018 gold medallists, Sime and Mihovil Fantela (CRO), will lead the charge in the 14-boat 49er fleet, while Austria’s Tanja Frank and Lorena Abicht will be favourites in the nine-boat 49erFX pack.

Ten boats will race in the Laser with 11 to take to the start line in the Laser Radial. In the Finn, Olympic medallists Jonathan Lobert (FRA) and Max Salminen (SWE) will spearhead the 13-boat fleet.