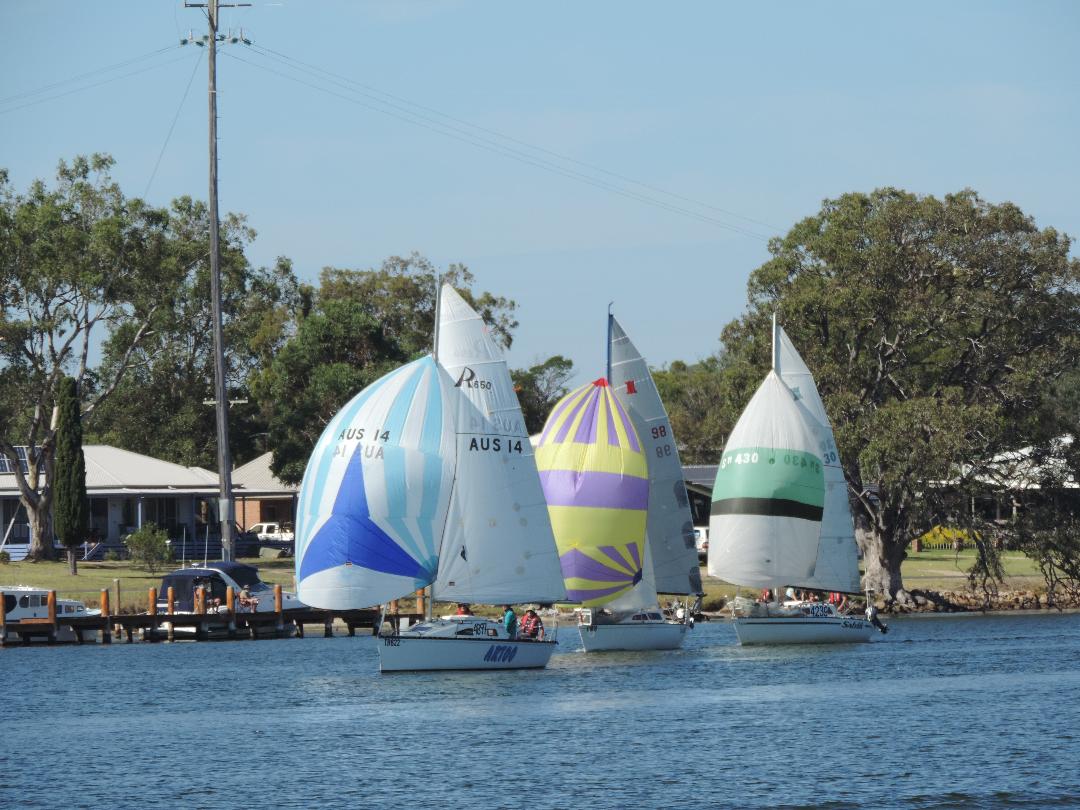 On the night of Friday, March 9 115 people attended the 50 year Gala Dinner for the Marlay Point Overnight Race at Sporting Legends in Sale where the history of this great event was revisited with the sharing of many stories and slideshow bringing back so many memories.

Saturday morning dawned with the morning fog indicating we were in for a nice day. The fog lifted early but was short lived as the sea fog rolled in around lunch time for an hour or so. This made it a challenge for those crossing Lake Wellington for the first time, and not quite landing on the western shore where maybe they should have.

The sea fog eventually lifted and weather become hot with around a 12 knot easterly breeze for the afternoon. This provided perfect conditions for the festivities at Marlay Point where sailors and spectators were entertained with live music, food vans, a classic car display and a jumping castle for the kids, while the sailors got themselves race ready and ferried cars and trailers to Paynesville the spectators.

Briefing was at 5:30pm with a large crowd forming in front of the clubhouse to hear the weather, any extra race info and to find out who won the major raffle prizes.

Start time soon came around with the first division starting at 7:45pm and the following two divisions over the next 20 minutes. The fleet sailed towards McLennan Straits on a fading easterly breeze which faded away to nothing soon after entering the Straits. The straits were their usual challenge to negotiate with the occasional whisper of wind peaking at around 1.5knots making it a slow trip, lucky the current was moving in the right direction making the trip slightly bearable.

After exiting the Straits the wind came and went from multiple directions which had boats putting spinnakers up one minute and down the next.

Day break and next to no wind for an hour or so but certainly gave everyone bulk opportunity to get some great photos. It continued to be a slow race into Paynesville where many spectators lined the jetties to watch the fleet come through.

The fleet continued through McMillan Straits for the lap of Raymond Island. As they entered Lake King a westerly breeze popped up giving some boats a spinnaker run to Point King.

After Point King a very light southerly helped the fleet proceed through to the south side of Raymond Island where in the distance a stronger south westerly wind could be seen. It was then a challenge to position yourself in the best position to make the most of that coming breeze.

Once the south-westerly was reached boats sailed on a two sail reach through to the Tiger pole on the SW corner of Raymond Island. From here it was a spinnaker run back into Paynesville to the finish line. A nice way to finish off a fun event.

At the finish line the Gippsland Lakes YC hosted the post-race food and entertainment with breakfast available, band playing and the bar open. Over 200 people enjoyed the presentation festivities at the Club, and celebrated into the evening with finger food being provided by local businesses.

The 50th MPONR 2018 has been one of the most successful races we have had with over 220 boats entered and more spectators than we have seen before, it is certainly indicating a strong presence that is not likely to slow down anytime soon. Put the 9th March 2019 in your calendar for next year.