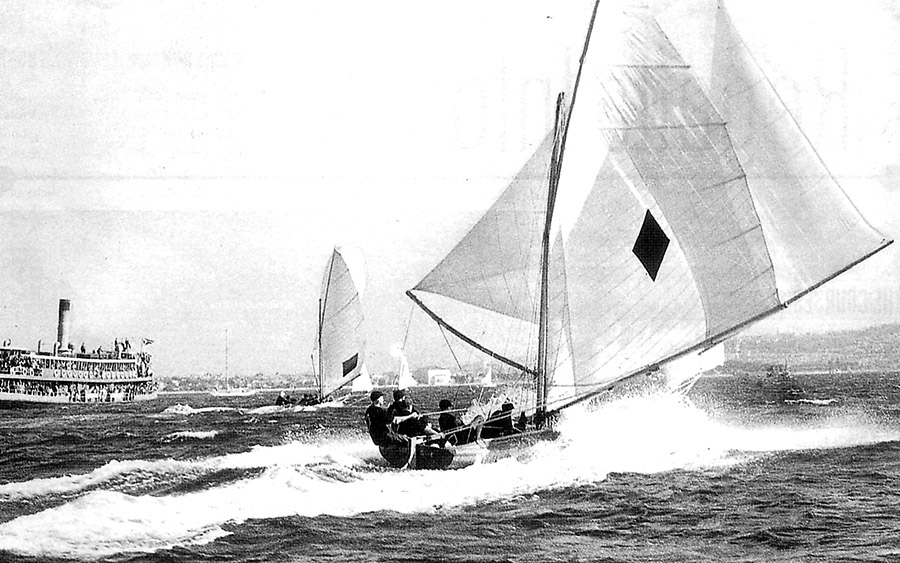 Aberdare was the breakthrough-style boat of the 1930s.

The man responsible for the birth of 18-Footer racing some 128 years ago (January 1892) was a leading Sydney retailer named Mark Foy, who was a keen sailor as well as being a very successful businessman with an acute eye for promotion.

After moving to Sydney with his brother in 1885, the pair set up a business under the name of Mark Foy’s, then later opened a large retail department store near Hyde Park in the Sydney CBD area.

In 1904, Foy also opened the Hydro Majestic Hotel at Medlow Bath in the Blue Mountains west of Sydney.  The hotel featured recreation facilities and amusements and was one of the most fashionable resorts in Australia.

The highly-motivated Foy was only in his mid-20s when he realised that the wonderful Sydney Harbour sailing area attracted little, or no, public interest.

Combining his professional business skills with his promotional awareness, he saw the potential of creating a popular public sporting event and set out to solve the problem.

Foy quickly realised that the biggest problem was the competitors, who didn’t care about public interest.  Races were sailed over 12-mile out-and-back courses, with the boats out of sight for up to two hours. There was no attempt to entertain spectators while the boats were out of sight and the handicap system used to determine the winner was too slow.

Foy turned to his entrepreneurial skills to rectify the problem and make yacht racing more popular.

Like most successful professionals, he simplified the problem and the best method to solve it.

He saw the boats as a problem.  They had to be more colourful, and be more easily identified for spectators than by a small number.  The racing had to be more exciting and faster, and the winner had to be the first boat which crossed the finish line.

The result was a boat with a huge spread of sail which gave it a sensational aquaplaning speed downwind.

Next was the best method of identifying each boat as the spectators cheered home their favourite.  His original idea was striped sails, but this was replaced by colourful emblems on each side of the mainsail.

Final step was a new handicapping system.  Foy’s idea was to have a staggered start, with a break between the best and the limit boats in the fleet.  As the better boats caught their lesser rivals, a dozen boats would race bow-to-bow past the grandstand full of spectators to the finish.

He whipped enthusiasm to a fever pitch, then hired bands to play at ferry terminals, on spectator ferries and on the specially chartered flagship.  He also hired a band to play on Clark Island, which was Foy’s ‘grandstand’ for the day’s racing.

On the big day, the high-pressure publicity generated by Foy paid great dividends.  Clark Island was packed to capacity while crowded, moored ferries added to the number of spectators.  Every available vantage point, on both sides of Sydney Harbour, was also packed to capacity.

The crowd was unprecedented, yet most of the spectators knew little about the sport.

Three races were staged on the day and the success guaranteed the future of 18-Footer racing.  Foy had demonstrated that it was the most exciting participant and spectator sport ever seen on Sydney Harbour.

A vast majority of the people were there to thrill to the excitement Foy had promised.  By the end of the day, they were ‘sold’ on Foy-style sailing races on Sydney Harbour, and are the forefathers of the 18-Footer enthusiasts, participants and spectators of today.

What better example of this was the ISAF changes following a disastrous 2008 Olympics, when a largely damning report claimed sailing was shown to be one of the least popular sports at the 2008 Olympics, yet one of the most-costly sports for TV to cover.

The ISAF decision was that sailing had to improve its presentation to the target audience, produce more exciting races, make use of the national flags and colours, and make the racing more viewer-friendly.  The announcement agreed with something Mark Foy had realised nearly 120 years earlier: ‘Sailors are not the spectators, yet we present our sport as if they are’.

At the 2012 London Olympics, some of the most critical races were sailed on amphitheatre-type course areas, with highly-visible national flags incorporated into the sails, full-course viewing for the spectators, and more incident-packed racing.

Not surprising, the result was the same as Mark Foy achieved in 1892.  There were thousands of spectators cheering wildly as their favourite team won the race.  Modern-day entrepreneurs finally began to see the light.  We now have some magnificent, colourful racing in a variety of boats and competitions around the world.

If Mark Foy was alive today, he would probably say something like “how come it took 120 years for these people to realise what was obvious in 1890?”

We can only wonder what other ideas Foy would have introduced if he had access to the space-age materials, computerised technology, use of colour, and the media resources we have today.