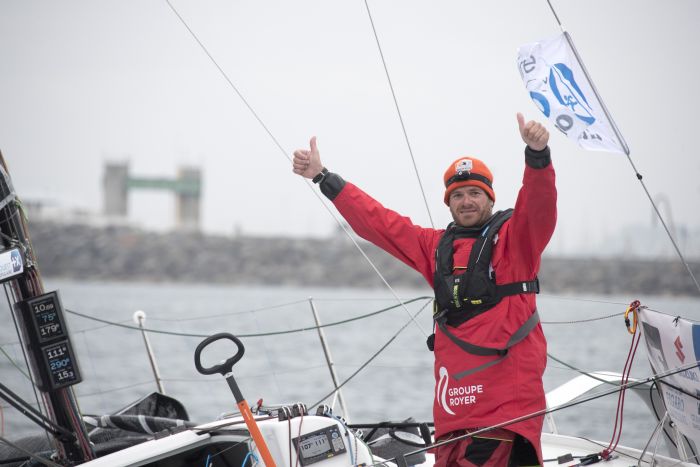 A final surge from Anthony Marchand early this morning has seen the skipper of Groupe Royer-Populaire Secours claim victory in Stage 3 of La Solitaire URGO Le Figaro after taking the lead with just 47 miles to go on the 400-nautical mile leg.

In crossing the line at 09:29 CET, after 2 days, 19 hours, 18 minutes and 36 seconds at sea, Marchand also secured the third La Solitaire stage victory of his career, having won two stages last year on his way to finishing second overall behind Sébastien Simon.

In a competitive fleet of 46 boats, Marchand was one of three dominant forces in this Stage which has taken the skippers from Roscoff to Roscoff via a lap of the channel, alongside Gildas Mahé, (Breizh Cola Equithé) and Alexis Loison, (Regioan Normandie), the latter having led for most of the leg. The trio sailed a textbook Stage as the only three skippers to escape a key tidal gate off the north eastern tip of Alderney in the Channel Islands, which shut behind them leaving their competitors stuck in the sluicing tide while they rolled north across the Channel with an ever increasing lead.

It was at the island of Ushant in the early hours of this morning that Marchand finally managed to pass long time Stage leader, close friend, training partner and former co-skipper Loison. First Mahé, then Marchand managed to get through Loison, sailing closer to the island under gennakers to make their getaway. Marchand then progressively broke away from Mahé and when he arrived this morning, he was 6 minutes and 12 seconds ahead of him.

In doing so, Marchand demonstrated great confidence in his new Figaro Beneteau 3 boat but showed too his experience gained through seven previous La Solitaire participations.

The Frenchman, from Plomeur in Brittany, was overjoyed to have won after such a tough leg. “What a leg! There was a battle between three of us. We all wanted to win, so the fight was on. I’m a bit disappointed for Alexis as he led most of the way. He made a few mistakes towards the end. There were places where we were really in amongst the rocks and didn’t have any charts. The forecasts weren’t reliable.”

With attention turning to the overall rankings, Marchand continued: “Now I can do the fourth leg as a serious competitor. I’m glad to be back in the game. I was disappointed after the first couple of legs. I lost a lot, although I didn’t make any big mistakes, so this is a boost for me. I didn’t think it could be done, but I’m probably back in the top ten overall. After all the hard work, the first leg in particular was a downer. All three of us lost out at the start of the event and have managed to get back into the contest now.”

Second placed Mahé, who now has a provisional 55-minute advantage over Loison and a one-hour 10-minute lead on Marchand on the overall rankings, summed up his Stage: “I sailed well on the first night. A bit daring and that paid off. The timing was just right to get around Alderney. Ten minutes later and we would have been stuck. It was straight across the Channel after that. If you’re in the right place, it works out.

“The wind was unstable during the night around Ushant in amongst the rocks. Scary. I have never seen a scenario like this. It was impossible to sleep last night in amongst the rocks. It was good having the two others with me to keep me going. We haven’t seen gaps like this… 50 miles… since the days of Troussel. I need to get some rest now before the fourth leg. It is all to play for.”

With the clock counting down, most eyes are now on current La Solitaire URGO Le Figaro overall leader Yoann Richomme, (Hellowork-Groupe Telegramme), who will be trying to gain back every minute he can.
When this leg started on Sunday afternoon in Roscoff, the race leading 35-year-old Frenchman, who won La Solitaire in 2016, had a seemingly impregnable cushion amounting to between 10 and 11-hours on this morning's podium finishers.
But as they crossed the finish line, he was languishing in 12th place, around 10 hours behind them, and so for now, it’s a waiting game as we see how quick his final miles to the finish prove to be.

Ireland’s Tom Dolan, (Smurfit Kappa), is on course for his best finish of this La Solitaire URGO Le Figaro and is currently in seventh place at the front of a strong group of eight sailors that includes Briton Will Harris, (Hive Energy), who are all within two miles of each other with less than 40 miles to the finish.

For the latest updates, view the tracker here, (https://www.lasolitaire-urgo.com/en/cartographie).