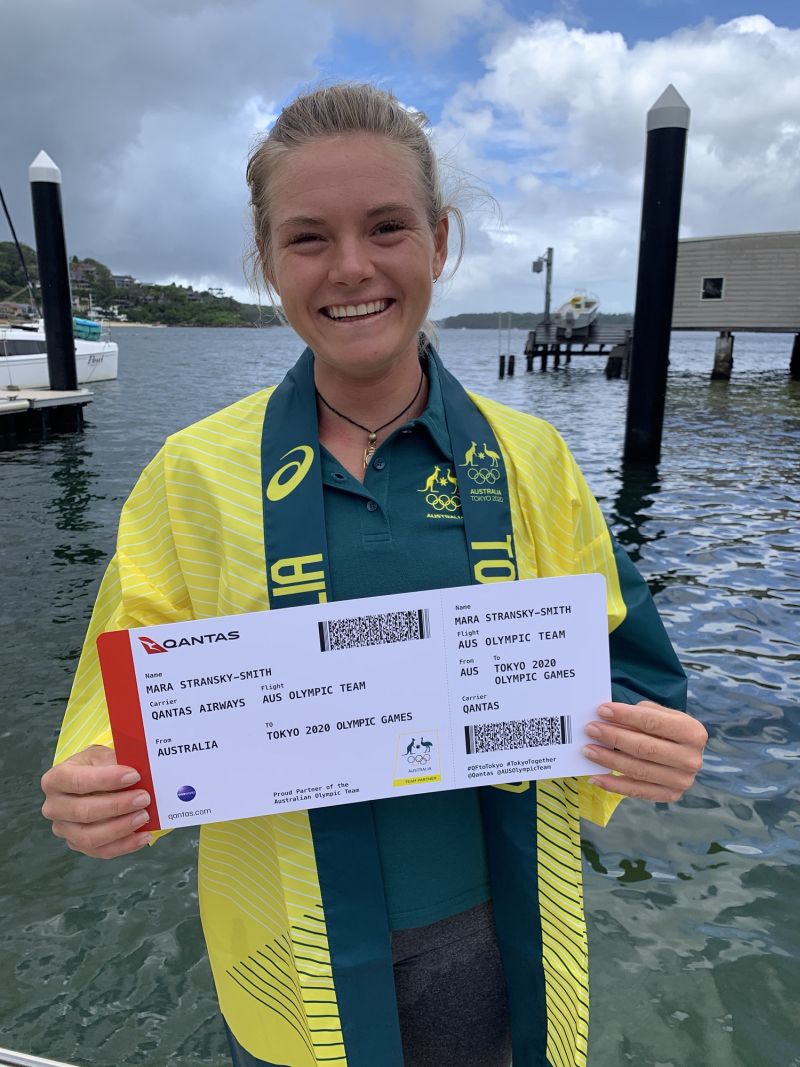 Mara DStransky with her ticket to Tokyo. Photo Australian Sailing.

Queensland’s Mara Stransky has today been named by the Australian Olympic Committee as Australia’s selection for the Laser Radial class at the 2020 Olympic Games.

The announcement caps a stunning rise for the 21-year old sailor, as the Tokyo-bound athlete will become the fourth youngest Australian Olympic sailor later this year.

“I was shocked for the whole phone call,” said Stransky when discussing the moment she was told of her selection. “It’s been a dream for so long, so to suddenly have it become reality I didn’t know how to react.”

Stransky was also selected as Australia’s representative at the Ready Steady Tokyo Olympic Test Event in Japan last year after a solid European season which included a 7th place finish at the European Championships in Portugal.

The experience in Enoshima (where the Tokyo 2020 sailing will be held) has her well prepared for competition this July.

“I’ve always enjoyed the sailing at Enoshima,” Stransky commented. “You really do have to be ready for anything, it is a venue that rewards those who can keep their scorecard consistent. I learnt so much from the test event. It shocked me, but I learnt more than I thought.”

Mara seemed destined to race sail boats, having grown up on her parents’ Adams 13 from four months of age.

“I did my first yacht race when I was 6 months old,” said Mara. “Before I could walk, I knew what was going on in a boat. It also meant I was able to forge a great relationship with my folks, as growing up in the cabin required good teamwork in a tight space.”

Hard work is no stranger to Stransky, with her yacht home making her training commute longer than most.

“To get to the gym from Russell Island meant I was up at 3am to get the first ferry to connect with the first bus and another connection to make the gym by 7am. It was a self-perpetuating cycle, I put so much effort in to get there I needed to get the reward to make it worthwhile so it made me push even harder.”

The Olympic debutant is also taking potential disruption over the next few months in her stride.

“We’re coming up with a Plan B domestically to stay race fit. Luckily we have a really strong fleet and team in Australia, and I’m looking forward to putting in solid hours with the whole team here.”

“Mara is an incredibly passionate and driven young sailor and she thoroughly deserves this selection,” said Murray.

“Her performance in Porto where she was 6th coming in to the last day amongst a field of numerous past and current world and Olympic champions showed everyone that she has what it takes.

“We are incredibly proud of the progress Mara has made over the past twelve months, and we are excited about what she might produce in Japan in a few months’ time.”

“Athletes have waited four years, and in some cases longer, for this opportunity,” Mr Chesterman said. “We are in unchartered waters, but we want to set a course to ensure they can prepare for the Games in the best possible environment and they can get to the Games safely. Part of that process is to announce athletes as they are nominated and selected to the Australian Olympic Team.

“Australia has an incredibly strong Sailing program and for Mara to make her Olympic debut at just 21 is testament to her fantastic talent and competitive spirit,” Mr Chesterman said.

“From her family instilling a passion and understanding of the water from a young age, to the coaching and development by Australian Sailing and support of her friends and teammates, today’s selection is a great achievement for everyone who contributed to Mara becoming the sailor she is today.

“There’s certainly disruption in preparing for the Games for many sports, but I encourage Mara and all athletes pursuing their dream of competing at Tokyo 2020 to continue taking care of what they can control – training and preparing as best as possible to be ready for Tokyo.”

Australian Sailing would like to recognise the Australian Institute of Sport, Queensland Academy of Sport and Royal Queensland Yacht Squadron for their support of Mara.

Find out more with full athlete Bios at www.olympics.com.au/olympians