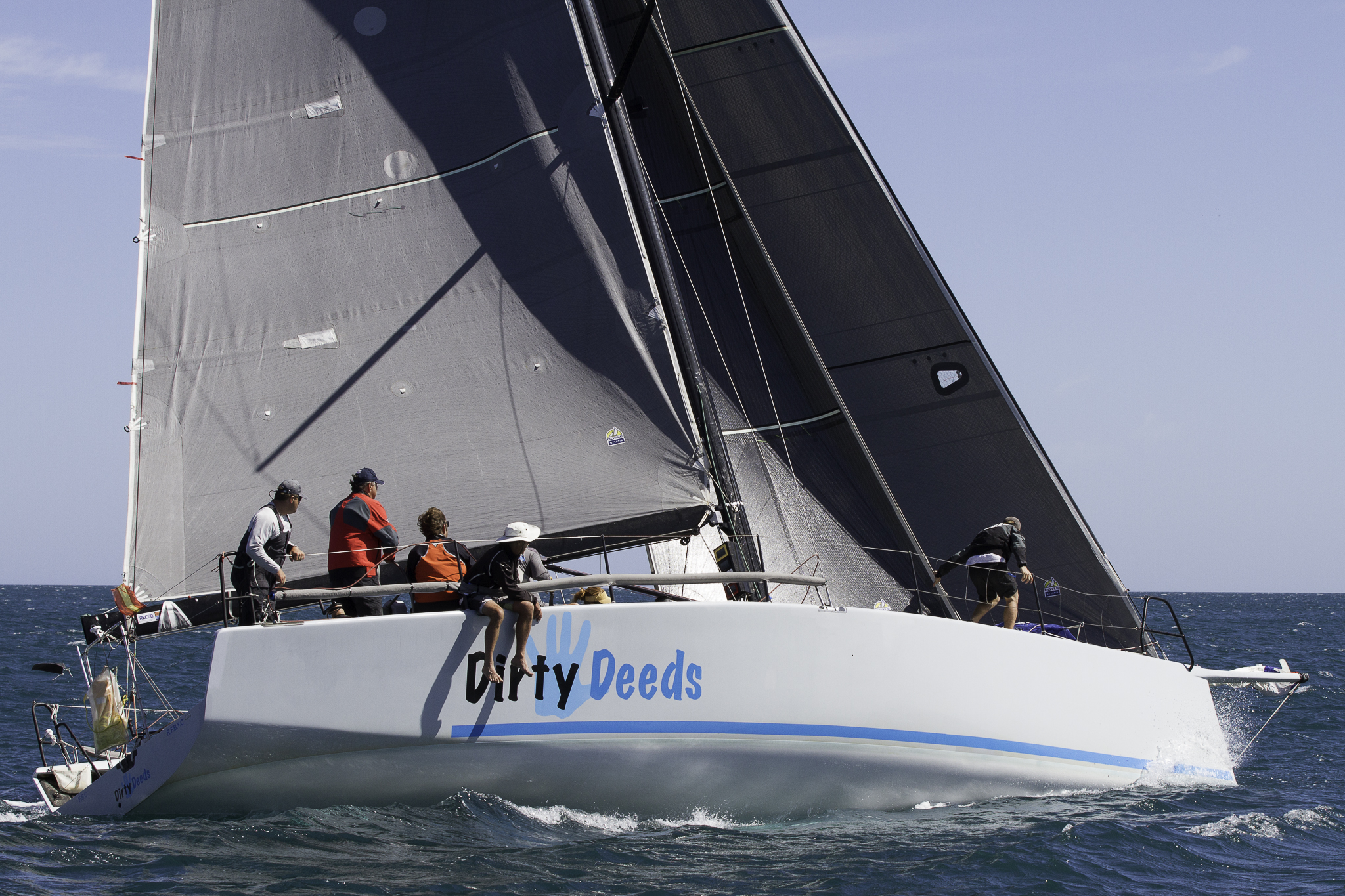 It was a bittersweet occasion for offshore sailors last weekend, returning to a spot barely ten miles from where their popular colleagues Rob Thomas and Paul Owens died two weeks earlier in a capsize during the Bunbury and return ocean race.

There were no problems this time. South easterly and easterly conditions made for an easy race in both directions. In the race from Fremantle on Saturday, Garth Curran’s Walk on the Wild Side set the pace, the Inglis 58 carving out the distance 14 minutes ahead of Alan Stein’s GP42 Dirty Deeds to finish first in YAH handicap.

Dirty Deeds however, took first place on IRC and backed that up with another win in the return race on Sunday. The use of a staysail gave the boat superb reaching performance. In the return race Dirty Deeds was recalled but sailed past all boats except Walk on the Wild Side before reaching the Peelhurst rounding mark. She caught and passed Wild Side on the next leg of the race, a square run from Peelhurst to Horseshoe Reef.

The square run caught several skippers unawares. The breeze was typically in the 15 knot range, but as often happens in this weather pattern, there were some big bullets as well. Anthony Kirke and Andrew Nuttman’s Enterprise was first to go, losing her grip and falling into a Chinese gybe. They recovered quickly, but narrowly behind them, Paul Arns’ Obsession, worried about the close proximity of Enterprise on one side and Chris Higham’s Argo on the other, followed suit with a spectacular Chinese gybe of their own. It took some time to regain control, by which time Argo gleefully flew past both yachts with her big white kite in perfect trim. Argo continued her good form to finish second on IRC, a repeat of her Saturday performance.

At the other end of the fleet, Ryan Binedell combined with Reuben Rosolin in the S97 Low Flying Duck. Competing in the double handed division, the little boat outpaced Bruce Beattie’s Radford 47 Lizard to the top mark on both days and set an IRC time on the return which gave the boat first place overall.

The Beneteau 34.7’s Dynamic and Wyuna enjoyed close competition on both days, finishing second and third on IRC on Saturday and improving to first and second on Sunday’s return. Phil Somerville’s S&S34 Huckleberry knocked the pair out of first place on Saturday and finished third n the return race.

After the tragedy of the last ocean race on the West Coast, this was a cathartic return to ocean racing for many and there were emotional moments at the Mandurah Offshore Fishing and Sailing Club on Saturday evening as sailors paid their respects.