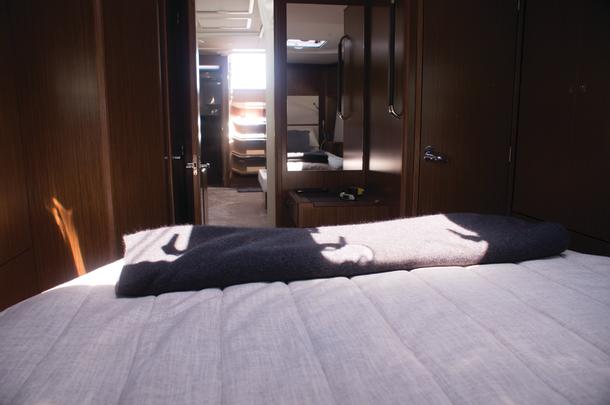 When you are recovering from knee surgery but have to do a boat test, you could not do better than hitch a review ride on the latest Bavaria yacht, the C57.

Under new management the Bavaria range is undertaking a significant change in the market and this yacht is a good indication of not only where they intend to take the marque, but also how well it is going. As the Ensign Yachts Group management team related it to me as I stepped aboard: “forget everything you thought you knew about Bavaria and look at it with fresh eyes.”

Well, that had me engaged straight away.

On paper it is easy to see which way the Bavaria design team wish to go. They have closed the long-standing partnership with Farr yacht design and now work with Maurizio Cossutti and Alessandro Ganz on the hull shape and sail plan, with Leo Curin of Croatia’s Pulse Yachts for the interior design. These may not be names familiar here in Australia, but Cossutti has been successful and popular in the European circuit of Ocean Racing Circuit yacht design.

So is a move to more performance craft the shift Bavaria are taking?

The Bavaria C57 is not an out and out racer, but there are some significant design changes definitely taking this yacht away from the previous Bavaria model range.

Certainly, the former range name of ‘Cruiser’ no longer applies here, but the new range still offers the same step up in luxury for the more traditional Bavaria lovers, along with that promise of added performance.

The Cruiser models are still available through Ensign Yachts as the C models roll out from the factory.

I never managed to test the Cruiser 56 that this C57 most relates to, so I cannot make the comparison. However, I am informed that the C57 has a 35 per cent increase in external hull and deck surface areas, this is a yacht with huge increases in hull volume.

This equates to a lot more space down below and a lot more deck space for sun lounging, apparently an item high on potential owners’ wish lists. The downside to increased hull volume, of course, is weight. More weight leads to a need for a larger sail plan, which may work against the principles of easy sailability on such a large yacht.

To overcome this Bavaria’s new owners have invested heavily in latest technology production upgrades. Using vacuum-infused construction, which Bavaria calls ‘VacuTec’, the displacement of the C57 is nearly 10% less compared to its earlier cousin the Cruiser 56. Cossutti’s design and build results in a light but stiff hull with a long waterline, but less wetted surface, for good speeds in both light and heavy air.

Interiors are moulded outside of the factory and dropped in later.

Warm and light Mediterranean winds, apparently, are the principal design target for this hull shape. Bavaria never went in for the harsh chine sections of other builders and it is good to see that Cossutti has retained that noticeable rounded tumblehome aft section.

This lighter but larger hull is then driven by a 5/6ths rig standing about half a metre taller than the 2013 designed Cruiser 56, providing the larger hull with a 15% increase in sail area. All of which equates to a 10% higher sail area to displacement ratio to drive the slippery design in all weathers. Nice work Mr. Cossutti.

The next necessity then is to make the yacht easy to sail. Our test yacht, Nixie, is the three cabin/twin head version without the crew cabin option, so it will be sailed with a minimum of two; there is a need, therefore, to make it easy to sail.

While the Bavaria designers have been keen to make the yacht more performance-oriented they have not forgotten its core constituency; so the self-tacking headsail is still there and the owners of Nixie have included electric winches with the Smart package. Mast furling has come a long way and the Inmast system is minimalist in size and, coupled with the Elvstrom sails, makes for an efficient sail plan.

The twin rudder, twin steering stations have all the winches and sheet leads right at hand. The tail ends tuck into a box underneath the skipper’s coaming seat, this ensures absolutely no encroachment into the all-important main cockpit lounging area.

This is the second most important factor of the invigorated Bavaria range: ability to relax. When you have such a large deck space it offers up so many options.

With a generous beam running well aft, the new owner opted for hydraulic drop-down pillars on the twin cockpit tables. Couple this with the multi-purpose cushions and you instantly have two large lounging beds in the cockpit. Why sleep down below on a hot summery night when you can go on deck and enjoy the night life?

Take those same cushions onto the foredeck and there is plenty more space there as well. They will even fit under the boom on top of the four cabin roof hatches. All the halyard running rigging runs under cabin top coamings all the way back to the winch positions. This is an uncluttered deck for maximum enjoyment.

Even the headsail roller furling unit is below the deck to maximise the sleek clean look.

Back aft there is a pop-up gas barbeque and sink situated under the transom seating. This makes it easily accessible from the large, drop-down transom platform. There is plenty of space between the steering stations to walk in between and make your way to the stairs on the port side to the platform. The starboard under-seating holds the liferaft.

In the middle of the transom seating is the large dinghy garage. It has been designed to fit a Williams inflatable jet-powered tender, which this owner has included.

As you would expect on a yacht this size, movement around the deck is easy, either underway or anchored. Putting up and lowering sails has everything at reach, especially with roller furling mainsail and jib.

The forward storage hatch behind the anchor pod will fit everything and anything you may want off the deck.

Speaking of easy to move, this applies to the sailing of this large yacht as well.

As per usual it was a light breeze that greeted us on Pittwater last October. We only used the standard sails on board, but the owner has opted for the large Elvstrom Sails Sport 106% genoa to keep the miles flowing when offshore.

The Elvstrom suit of sails are in excellent shape, even for a mast furling mainsail with vertical battens. Hard on the wind in ten knots of breeze we kept a good angle off apparent of 33 degrees and maintained five knots.

Clearly this is suitable for a day sail meandering the waters of Broken Bay, but if you wanted to make passage then kicking the 60 kilowatt (80 horsepower) Yanmar into gear is quite sensible. With a massive 500 litre fuel tank you should easily make whatever destination you have your heart set on.

Getting in and out of the marina is also easy. The owner has opted for both bow and stern thrusters, which is sensible. He has also upgrade to the four-bladed propellor to ensure his horsepower comes with bite. At cruising rpm’s she will sit on 7.5kn all day long.

The deck layout is sleek, the profile view shows a low cabin top taking advantage of the deep canoe body. The wrap-around dark glass also helps to reduce the visual sense of height.

With halyards disappearing under coamings along with the self-tacking jib sheets, you end up with vast expanses of teak decking totally unencumbered, except for the myriad of hatches. The bulwark is low and the toerail cleats are pop-up to maintain that sleek look.

When viewed from off the boat, the C57 does not appear to dominate the space anywhere as near as its older design cousins would have.

So how does this extra hull volume both wide and deep affect the interior?

While you would say this is a standard layout, there is some hidden extras that take it to another level.

First of all it would look stunning at night time, the lighting is both useful but also clever in the way it highlights certain areas
to give the feel of a salubrious hotel penthouse. There are courtesy lights in the saloon as well as the cockpit and dimmable ambient lights in both the saloon and the cabins. The owner also opted for the option of air conditioning throughout.

This interior is the first for Bavaria by Pulse Yachts and lays the base for the rollout of the whole C range. They are calling it a ‘superyacht’ style by being roomy, but with separate areas. For example, the main saloon table is offset to port, out to the centreline, but there is a large walk through to the forward cabin along the starboard side of the mast. There is a long bench seat on the starboard side, with the navigation table at the aft end. The pop-up television can come out from behind this bench.

The saloon table includes a bench seat on the centreline to ensure you get the full crew around the table, seven comfortably.

The table also drops down hydraulically to offer another double berth. This gives a total of ten berths if required, counting the cockpit berth.

The galley stretches across the full width at the mast. This is becoming a useful design idea to make sure it does not encroach on the main saloon area, while allowing two chefs to prepare the food without encroaching on each other. Combined with the barbecue in the transom it means the galley does not necessarily have to be so large inside the main cabin. Spread across the width of the cabin in two U-shapes ensures you do have plenty of bench space and storage space underneath.

The port side has the oven and the starboard side has a large split fridge and freezer; plus a wine fridge and a wine rack.

I managed to sneak a peek under the floorboards at the mast base and was heartened to see the five leading edge keelbolts supported by a massive load-spreading base plate washer.

The main cabin forward is a good size with the head and shower compartments separated either side of the entry. Both of these rooms are tight, but suitable with good venting.

The bed is full sized with side access. Overhead hatches give a great view along with hull side windows. You access the under bed storage by raising the mattress. As a sign of the times, the bedside includes USB charging ports built into each of the reading lights. Nice touch for all those e-book readers out there.

Both storage lockers forward of the head and shower offer coat length hanging space as well as overhead storage.

There is some dreamy LED lighting inserted into the headliner in a nice curved U-shape, adding a certain ambience.

The aft cabins are a little tighter for a yacht this size, but still roomy. They give ample access to the large engine room along with genset access in the port side cabin.

The port aft cabin has entry to the head and, from there into the shower cabin as well. The saloon has access to the shower and through to the head. The starboard day head cabin can be converted in another version to be a double bunk cabin.

There is a fast turnaround of new C models coming out of the Bavarian factory over the coming year. The owner of Nixie apparently was told by a sailing friend of his who saw the C57 when launched at Boot Dusseldorf last year and put his deposit down sight unseen. He is definitely not regretting his decision.