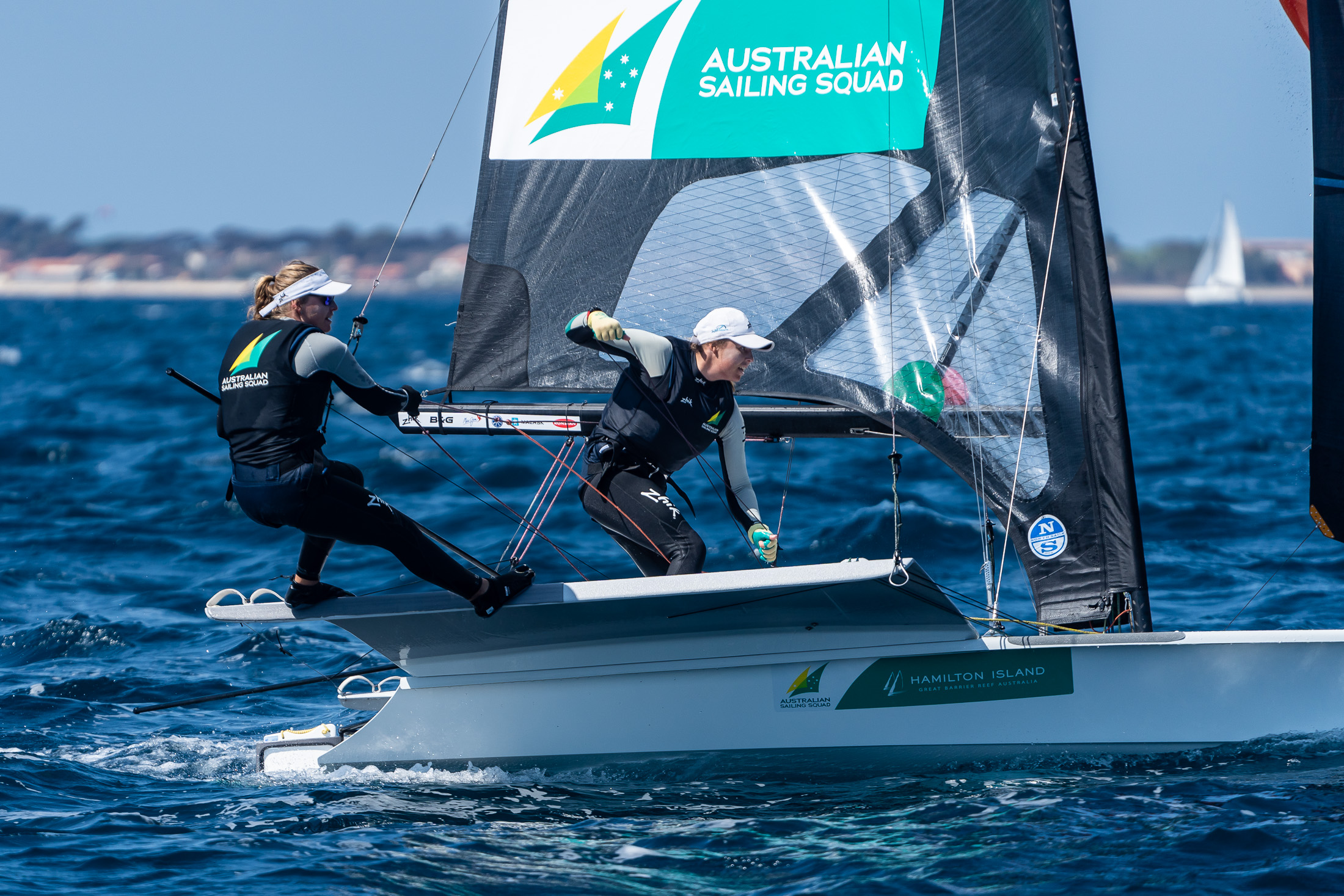 Hyères, France: Day three at the 53rd edition of the French Olympic Week regatta saw the end of the qualifying series in the ILCA 7, 470 Mixed, 49er and 49er FX classes with multiple Australian Sailing Team (AST) and Australian Sailing Squad (ASS) athletes making the first cut and qualifying for their respective gold fleets.

Olympic Champion Matt Wearn (WA) was one of them after he started the day with his fourth win out of five races. The Olympic champion ended the day in second place overall behind Germany’s 2020 Laser World Champion Philipp Buhl after being U-flagged in the starting sequence of the second and final race of the day. The pair will face each other for the first time this week when they meet in the gold fleet, and with two days of final series and a medal race left, anything is possible.

All AST and ASS ILCA 7 athletes (former Laser) qualified for the gold fleet with Finn Alexander (NSW) defending his top 10 position finishing in eighth on Wednesday. Ethan McAullay (WA) was the winner of the day, jumping up sixteen places into 26th after winning his final fleet race and securing his gold fleet spot in the process. Zac Littlewood and Luke Elliott (WA) made the cut in 18th and 23rd respectively.

There is still another day of fleet racing to go in the ILCA 6 class, but the young Aussie brigade had a day to remember with race wins and big moves up the leader board.

In the 470, both Australian crews will continue racing in the gold fleet. Chris Charlwood (WA) and Amelia Catt (TAS) scored two top 10 places (9, 10) and qualified in 12th, while Tokyo Olympian Nia Jerwood (WA) and Connor Nicholas (WA) progressed to the gold fleet in 19th. Both crews are coached by dual Olympic champion Malcom Page OAM, and are full of praise for the new coaching set up.

“It’s been great to be coached by Mal,” said Charlwood. “He is a two-time Gold medallist and obviously a very good athlete, he knows so much about the class, and he brings a lot of his athlete perspective to his coaching, which is a great positive.

“He’s also learning more and more about everyone’s individual needs and personalities. Every day we work with him we are starting to get to know each other better and better, which has been great.”

In the 49er FX only one boat qualified for gold fleet with Laura Harding (VIC) and Annie Wilmot (NSW) scoring two top ten results to finish the day in 14th.

“It was our final day of qualifying and we kept it consistent and made it into gold fleet which is awesome,” shared Wilmot. “It’s our first regatta and our first gold fleet together so tomorrow (Thursday) we will just go out and push,”

Like most of the Australians, Wilmot and Harding are thankful for the racing opportunity on the international big-fleet circuit, especially after the long break caused by the pandemic.

“It’s nice to be back with the international fleet again, it’s been two years because of COVD. It has been great to get back here and see how the fleet has evolved, and it will be nice to see how we will go in gold fleet tomorrow (Thursday).”

For London Olympic medallist Olivia Price (NSW) and Evie Haseldine (NSW) racing in the 49erFX will continue in the silver fleet, but as a new team who have only been sailing together for six months, they were still happy with their results and progress made.

“We had a great first race but unfortunately, we were a couple seconds early for the start, so it was a little bit disappointing to get a UFD in a race we thought we won. But it means that we are up there and working together well as a team and I think that’s been one of our main goals here,” Price said after posting a UFD, a 14th and 11th place.

Price has teamed up with Evie Haseldine, who at 18-years of age is not only one of the youngest on the team, but coming from the Nacra, she is also new to the 49erFX class.

“Palma was a good lead-in for, just to learn how it all works on this circuit,” Haseldine added. “I also love that I am here with Olivia, I wouldn’t want to do it with anyone else, so it’s been fantastic for us as a team to get over here and learn heaps.”

A UFD in the final race cost Rio Olympic champion in the Laser Tom Burton (NSW) and crew Simon Hoffman (NSW) dearly as they dropped to 40th overall and into silver fleet.

“It’s good learning and the first international event for us in the 49er with a bunch of boats,” said Burton. “The training at home has been good but obviously there are some weaknesses in the bigger fleets we just haven’t really seen, so we can’t be too disappointed.

“We got one good race in yesterday which was a second where we got off the line well. Other than that, it’s hard slogging. Obviously, it’s a different feeling, in the Laser I would normally be out in the front and now we are back to the beginning a bit,” Burton concluded, who last raced in Hyères in the Laser in 2019.

The Nacra 17 will continue racing in their 32-boat fleet with dual Olympians Jason Waterhouse (NSW) and Lisa Darmanin (NSW) continuing in fourth place after scoring another four top ten results.

Hyères is the first international regatta since the Tokyo Olympic Games for the cousins, who missed out on racing in Palma due to a bout with COVID. With upgrades to the Nacra 17 including an updated elevator and an adjustable rudder rake system rudder system for Paris 2024 only introduced at Palma, there are many new challenges to get used to.

“We’ve really been enjoying the racing here in Hyères,” Waterhouse said. “It’s our first time with this proper set up, but it’s really cool with the boats foiling up wind now as well. We are really happy about that as it adds a new dynamic to the Nacra class.”

While the changes make the class even more exciting to watch, they also mean another level of work on board.

“I already have so much on as a crew normally and now I have a whole new job, especially around the top mark,” added Darmanin. “We are just trying to learn as much as we can, trying new things and then we head on home where we can work on those boat handling skills.”

In the iQFOil, men’s slalom groups were not completed, and the women’s not started, with the qualification for gold fleet (iQFOil M) to be completed on Thursday.

In the women’s Kite, Queenslander Breiana Whitehead moved up one spot and into 12th after 12 races.

Racing continues at the French Olympic Week Hyères on Thursday, 28 April 2022 from 11 a.m. local time with the first day of the two-day final series. See the race schedule and gold and silver start lists here: https://sof.ffvoile.fr/official-notice-board/

The live race status can be followed here: https://dashboard-sof.sailti.com/en/default/races/race-directcomplet