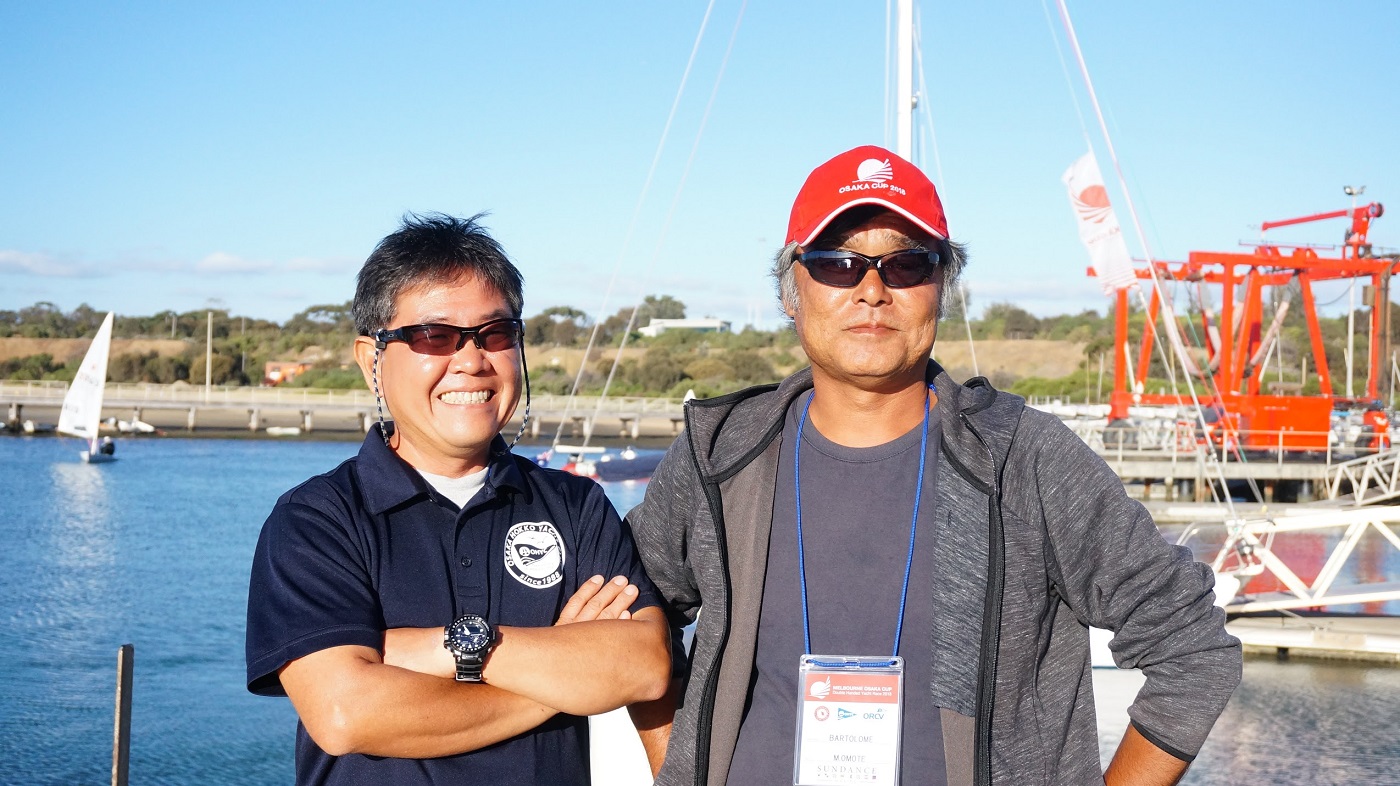 As Joanna Breen and Peter Brooks slipped their berth at Sandringham Yacht Club yesterday, readying to start the Sundance Marine Melbourne Osaka Double-Handed Yacht Race at Portsea today, organisers were in the final throws of preparing festivities for the main start at 2pm on Sunday 25 March.

Last evening, a Civic Reception was attended by over 150 competitors, officials and guests at the Town Hall, including Councillor Philip Le Liu, representing Melbourne City Council, who presented competitors with a special flag for each yacht – celebrating the 40th anniversary of Melbourne and Osaka becoming sister cities. Kazuyoshi Matsunaga, Consul-General of Japan in Melbourne was also in attendance.

MC for the evening, George Shaw, said, “The support of the Melbourne City Council has been unwavering and very much appreciated since the first Melbourne to Osaka race. The success of last night’s event again demonstrated that strong support.

“Race crews, who were presented with their competitor flags and a commemorative badge from Osaka Hokko Yacht Club Commodore Norio Utsuyama, are now starting to really feel the excitement of the imminent race start.

“Today our first competitor, Morning Star began their long journey to Osaka with the rest of the fleet to start over the next couple of weeks.”

“Everyone associated with the race is keenly anticipating the event getting underway after two years of planning and preparation.”
.
STS Young Endeavour will act as start vessel for the 5500 nautical mile race. The Tallship was a gift from the United Kingdom to the Government and people of Australia to mark the Bicentenary in 1988. Australia's sail training flagship, it participates in major events in Australia and worldwide to provide young Australians with a unique and challenging sea experience.

The Brigantine, with 22 young Australians currently embarked as part of the youth crew undertaking a 10 day voyage from Melbourne to Eden, is also carrying two very special guests for the start. Jessica Watson and Ken Gourlay will view the start of this iconic event while meeting the young crew members and regaling them with their individual adventures.

Watson was awarded the Order of Australia Medal for completing a southern hemisphere solo non-stop circumnavigation in 2010 at the age of 16, then in 2011, the Queenslander was named Young Australian of the Year.

Gourlay completed a single-handed non-stop circumnavigation of the world in 2007, the only Tasmanian to achieve this feat and the oldest and fastest Australian to do so. Along the way he raised over $127,000 for the Tasmanian-based Clifford Craig Medical Research Trust for eyesight disorders ad diseases in children.

The thrill-seeking Roulettes will be on hand to fly over the Portsea Pier and fleet as the Warning Signal is fired. Established in 1970 and distinguished by their red-and-white theme, the Roulettes never fail to excite the crowds with their precision acrobatics. Completing the picture will be the renowned Royal Australian Air Force's jazz quintet, entertaining the public around the foreshore and the Pier. Organisers will be on hand to address the public.

The first of a weekly TV shows is airing now in the ‘News’ section on the site – the Ocean Racing Club of Victoria’s Melbourne-Osaka committee chair, Martin Vaughan, talks to Race Director Simon Dryden, a competitor of two past Melbourne Osaka races.

Among other things, Dryden explains the staggered starts of the race billed as Australia’s longest ocean race, including the hopes that the yachts will finish in fairly close proximity in Osaka, making it a real spectacle for entrants, locals and officials alike.

Joanna Breen and Peter Brooks were the lone starters today. At 1215.pm, after a delayed start due to light and wafty airs, Breen’s S&S 34, Morning Star, was off and running in 3 to 5 knots from the south west, on an overcast day.

The next start is to take place on 18 March, ahead of the main event one week later.

Away on the 18th is the Japanese crew of Keiichirou Morimura and Masakazu Omoto on Bartolome. The pair will be accompanied by their own personal cheer squad – 31 Japanese officials and supporters will be in Portsea for one day only, to farewell one of two international competitors. The other, Steve Ho and John Bankart on Surfdude from Hong Kong, is in the main start.

The largest boat in the fleet, Rupert Henry’s Judel/Vrolijk 62, Chinese Whisper, will be the last boat away, when the Sydney skipper and Greg O’Shea depart on 1 April, yes, April Fools’ Day – but that will be the last thing on the pair’s minds.