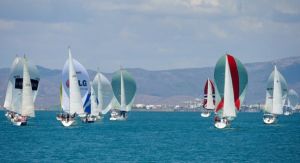 Townsville Yacht Club today released an amendment to the Notice of Race for the 10th Magnetic Island Race Week which clarifies entry to the cruising yachts’ class, previously-known as the Performance Handicap Class.

This year’s regatta, which will be run from September 1 to 6, is open to IRC, Cruising Spinnaker / Performance Handicap, Cruising Non Spinnaker, Trailable, Sports Boat, Multihull Racing and Multihull Cruising entries.

“The SeaLink Magnetic Island Race Week has grown to be a relaxing cruise-with-your-­mates type regatta.  To keep with this approach, the organising committee has amended the divisions in this year’s PHS class so that like-boats are racing each other competitively with each division’s race length set to make sure all are home back at Magnetic Island Marina in plenty of time for the evening festivities.

“The divisions will be sent off on bay courses and island/fixed mark courses with close racing assured within each division,” Steel said.

The Cruising Spinnaker / Performance Handicap is open to yachts of 30m or less LOA. Their handicap will be set by the Handicap Committee using the PHS system.

“We will not have a PHS racing division as such. All Cruising Spinnaker/PHS yachts will be in the one class. PRO Denis Thompson will then allocate the entries into three sub-divisions based on size, style and PHS handicap. The intention is to increase competition between similar performance boats within their division,” Steel added.

The number of entries to the Cruising Spinnaker / Performance Handicap is gradually building with intra-state and inter-state entries leading the charge ahead of this week’s on-mass Townsville Yacht Club skipper sign-up.

Entry to all classes is open at http://www.magneticislandraceweek.com.au/