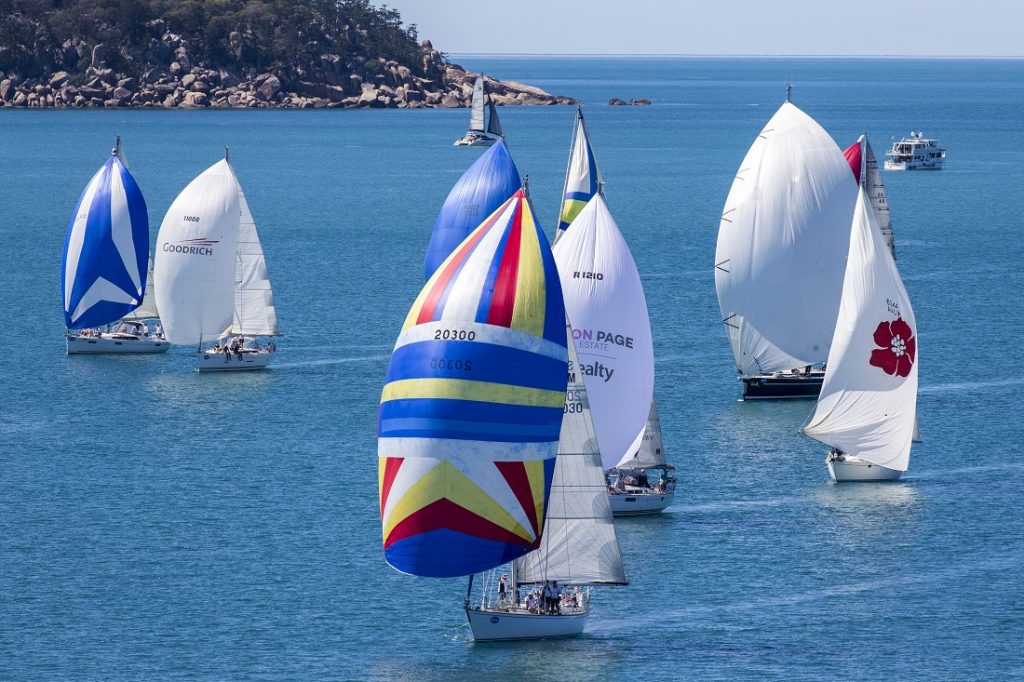 Magnetic Island has turned heads for eons, but since SeaLink Magnetic Island Race Week was added to the northern sailing regattas in 2007, competitors from far and wide have been captivated.

Four years ago, when James Permezel competed for the first time, with his Hanse 445 ‘Charm Offensive’, ‘Maggie’ turned the tables and used her charms on him.

It was somehow meant to be. Permezel now bases his yacht at the Island’s marina, and with a friend, Mick Grimshaw, has bought a house and a commercial premises in picturesque Picnic Bay where the two are in the process of building a microbrewery. Fingers crossed it will be open in time for Race Week, (from 2-8 September). “Everyone is welcome,” he says.

“We were looking at buying something on the Island. Over dinner at Mamma Roma, someone said, ‘I think you can buy the arcade on Esplanade’ (where Mamma Roma is located). We rang the owners, they said yes, and we bought it three days later! We started to think about what to do and thought there was a gap for more restaurants and a microbrewery,” Permezel explains.

“We thought the arcade would be a great place to put a brewery and a beer garden – we are licenced for both. We’re using a local builder and brewer. Everyone is working hard to complete it and we’ve been trialling our beer.”

As to food, the Victorian says, “We’ll have bar snacks and a food van at the end of the beer garden. You’ll also be able to get food from Mamma Roma’s and any of the other shops in the arcade and bring it to the beer garden.”

Permezel said he and Grimshaw have had so much encouragement and support from the locals: “We put on a BBQ in the beer garden a couple of weeks back to thank all the workers and supporters. We added take away pizza from Mammas – and you could see how well it will work.”

While he continues to work in Victoria, the local brewer will manage the business. “But It gives me the perfect excuse to keep going back Maggie… I have a long-term plan to move to the Island,” says an enthusiastic Permezel.

“It was windy but glorious weather, competitive on the water, but so social back on shore, just like Maggie Island Race Week. I had seven weeks up north, spending most of the time at Maggie, and I moved Charm Offensive there.”

Permezel’s hope is to support tourism, and to help reinvigorate the Island’s economy, all the while enjoying his connection to it.

“It’s a hidden paradise. From a boating point of view, you can get direct flights to Townsville, the SeaLink ferry to Nelly Bay. Step off, and there you are right at Peppers, the marina, restaurants, the shops and a bottle shop. Everywhere else (other regattas) in Australia we go requires a car,” the Victorian says.

Permezel is not the first Race Week entrant to feel the pull of well-named Magnetic Island. Paul and Clare Ley, a Sydney couple who own the Kaufman 58, Pilgrim, moved their sail charter business lock, stock and barrel.

Paul Ley: “Winters in Sydney were dire for our business. About seven years ago, we cruised up and down the coast and ended up at Maggie. We did Race Week, met Lance (Jager, the marina owner) and proposed we do winter charters here. Four years in, we loved the place, bought a house, but still went back and forwards. Five years later we moved here permanently.”

The friendly couple continues to race at SeaLink Magnetic Island Race Week, with places on board available for charter. See: www.pilgrimsailing.com.au/

“The charter business has worked very well for us; we have staff now. We’ve started another business called ‘Beach Club’. We take people to beaches that aren’t otherwise accessible. See: www.thebeachclubmi.com.au/

“We’re excited for James – we’ve had a few chats about the microbrewery. Our philosophy is to buy local on the Island, so if the brewery kicks off and goes well, we’ll use his beer on the boat for charters.

“All the locals are excited and supportive – not that many new things have happened on the Island in recent times.”

Other Race Week competitors seduced by the beauty of Maggie Island include Tasmanian couple Jacinta and Brett Cooper who bought two units and marina berth, and Charm Offensive crew member, Steve Quinlivan, who will do up and move into a house he bought at Picnic Bay.

All information on SeaLink Magnetic Island Race Week at:  www.magneticislandraceweek.com.au/

Matt Wearn assured of Gold in Laser at Tokyo Olympics