At the heart of the new M32 Series is a simple philosophical approach – to enable talented sailors to compete in the fastest, most dynamic and competitive sailing events in the world, but at an affordable cost and thus on a regional basis. The new M32 Series fills an obvious void in the current sailing marketplace between the budgets needed for small boat dingy racing and the seemingly inaccessible world of large professional competition.

The new M32 Series sets out to provide a platform that is commercially viable for the teams, partners and sponsors as well as being exciting for the audience. For the amateur sailor, it provides a path for new, aspiring teams looking for a stepping stone to a career in professional racing and delivers them exciting and challenging arena-style racing that is attractive to the sailors and sponsors alike. For the professional racer, the new M32 Series delivers the highest levels of competition against their fellow accomplished sailors, themselves looking for a new series to complement their existing programs such as America’s Cup, Olympic Sailing, Extreme Sailing Series, World Match Racing Tour, IMOCA and Volvo Ocean Race. 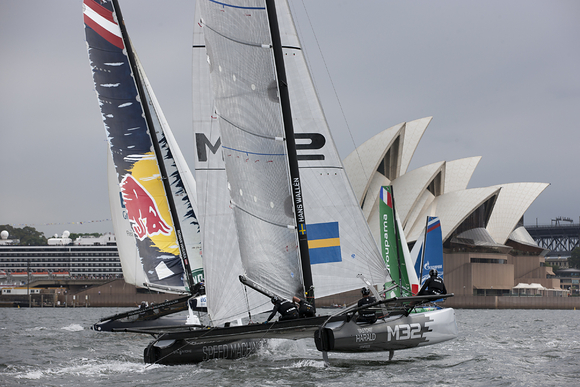 And after staging a summer Series in Scandinavia and a Winter Series the USA during 2014, the M32 Cup is set to undergo unprecedented expansion in 2015 and deliver on its ambition of creating multiple regional series, but with a truly global footprint. New circuits for the 32ft high performance racing catamaran will be launched in Iberia, European Lakes and the UK plus a North American Summer Series.

The Series is most established in Scandinavia and 2014 marked the second season of competition. This comprised five events, in Gothenburg (SWE), Oslo (NOR), Malmö (SWE), Copenhagen (DEN) and Stockholm (SWE). More than five boats competed in all the regattas with teams fielded by leading sailors such as three-time Olympic medallist Freddie Lööf, match racer and former Victory Challenge strategist Mattias Rahm and former Volvo Ocean Race sailor Klabbe Nylöf, while the circuit was won by the Atlanta Olympics Star Silver medallist, Hans Wallén. 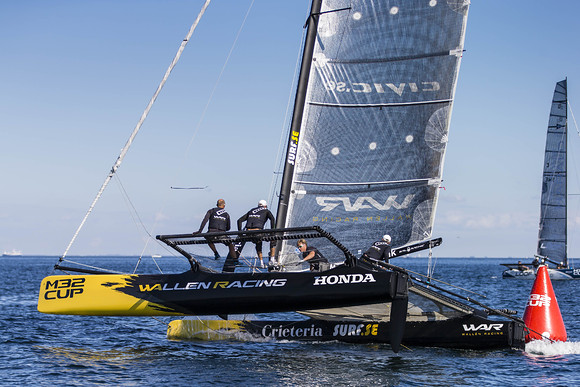 In 2015, the Scandinavian circuit will again feature five events but in place of Malmö, the 2015 Series will visit Finland for the first time. Racing will kick off in Oslo in May, before moving on to Gothenberg mid-June, the week before the Volvo Ocean Race fleet finishes there. It then moves to Copenhagen in August followed by Helsinki, Finland in September and on to the final in Stockholm in mid-September.

Aside from the slight change in the venues in 2015, the biggest development on the Scandinavian circuit will be in the numbers of boats competing. At least nine are expected, including some sailed by teams from outside of Scandinavia.

“There is huge interest at the moment,” admits Mathias Rahm who, in addition to being a competitor in the Scandinavian Series, is also its Managing Director. “We have around 20 teams working really hard to get into the Series in Scandinavia. We have interest from Scandinavia, of course, but also from other countries like Great Britain, Germany, and Poland – this shows that the way we run the Series is a smart way to do it.”

More immediately racing is set to resume in Florida for the M32 Miami Winter Series comprising of four events, starting on the 8th of January. This event will be followed by two more, back-to-back events, the first running into Bacardi Miami Sailing Week over the 1st-7th March.

Racing in Florida will conclude with the M32 Gold Cup, the class’ unofficial World Championship. This was first held in 2014 when it was won, like the Scandinavian circuit, by Hans Wallén. While six boats are set to compete in the Miami Winter Series, the fleet is expected to swell to 12-15 for the Gold Cup, with boats being shipped to Miami especially. Several of these will be chartered to teams looking to join the circuit, with names to be confirmed nearer to the time. 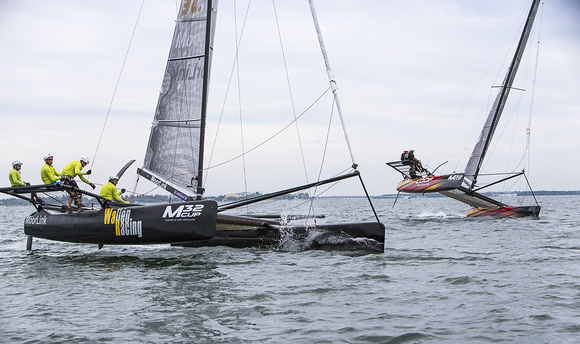 A second US circuit will take place over the summer starting in San Francisco in May. The M32 US Series continues in Chicago, Long Island (NY), Newport and concludes in Boston in September.

For all these events, the M32 Cup’s organisers are guaranteeing that a minimum of five boats will compete, but interest is already outstripping supply. The M32’s Commercial Director, Martin Sohtell, confirms: “We already have the boats reserved for each Series, so we know we’ll have the boats that we say we’ll have.”

Further circuits in a number of regions of Europe will be announced in Q1-2015 when all of the details are finalised.

“We have an ambitious project with the M32s,” says Sohtell, who has been tasked with putting this together. “We are trying to create a regional professional series where established teams can use it for training, practice and to work with their sponsors. We are seeing quite a few teams from the America’s Cup, Extreme Sailing Series and Alpari World Match Racing Tour who will use this as a complement to their current sailing programs.”

In addition to the ‘big teams’, the aim is also for the M32 Cup to be used as an opportunity for aspiring pro sailors. According to Sohtell, the regional circuits for the M32 will allow fledgling teams to take part on a lower budget and then, if they succeed, to step up and to compete internationally.

Ultimately, Sohtell anticipates that the M32 Cup will be running at two levels – Grand Prix, for the pro teams or top private owners committed to competing in the whole circuit and a ‘Gran Turisma’ circuit suitable for private owners with less time and unable or unwilling to commit to competing on the Grand Prix circuit. The racing on the latter could include more traditional, longer courses, as well as established events such as the JPMorgan Asset Management Round the Island Race, Aberdeen Asset Management Cowes Week, Centoliglia, the Bol d’Or and Copa del Rey.

Sohtell comments: “It is going to be like a football game length-wise. During that time, we will really push hard to do six or seven races. It’ll be really intense with commentators and full on hospitality.”

From the outset, the M32 Cup has been designed squarely to be a professional circuit with corporate backing for both the circuit itself and the competing yachts. This is already furthest advanced with the Scandinavian Series, now going into its third season. In 2014, most of the boats had sponsors while the Series had backing from Land Rover, Sail Racing clothing and Moet champagne.

Mathias Rahm, Managing Director of the Scandinavian Series says: “Now we can show people and the sponsors what we have been doing. They think that this is a great event. They compare it with the National Hockey League and the cross country skiing. Now we are on the same level as they are. So it is a huge opportunity that we have at the moment.”

Events will follow a standardised format and this doesn’t just extend to the racing, but shore side too. Sohtell expands on this: “We aim to give great exposure, have great hospitality and provide great opportunities for activation, be it business-to-business or business-to-consumer. And we have a great media set-up. This will be the same from event-to-event so that a team could go from one series to another and they and their sponsors know exactly what to expect. Hospitality will be of a certain standard, the exposure is the same and the rules are the same.”

Considerable investment is being made into the technology for the M32’s television offering, including the cameras and microphones that will be fitted to boats. This will be first tested at the M32 Gold Cup. “It is going to take the best from the developments we have seen in sailing over the last few years and add some features we’ve seen from other areas, like Formula 1,” says Sohtell.

In 2015, the intention is to have eight-to-ten events spread across the circuits where there will be live TV.

With the additional Series that are to be announced over the coming weeks, the M32 Cup is set to one of the fastest growing classes of all time. Sohtell concludes “Across the world, we see 25 and 40 regions that could hold a M32 series over the coming years. 2015 is just the start of the evolution of the M32 Series, and I am confident that it is going to be followed up by plenty more in the coming years.”