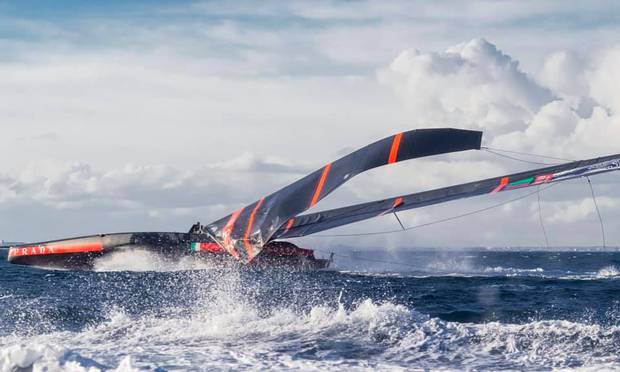 Luna Rossa's AC75 dismasted while out on a sea trial this week. Photo / Facebook.

“It's a new boat and something like this can happen. If you don't push hard you will never know your limits.”

The was the message out of Luna Rossa after their AC75 dismasted while out on a sea trial off the coast of Marina di Capitana, Italy.

No team member was injured in the incident, with the mast, sails and rig immediately recovered by the sailors onboard with the help of the shore crew on the support ribs.

“The reaction was impressive, considering that the guys delivered the mast back on shore and it was not an easy job at 20 miles (32km) from the base,” team director and skipper Max Sirena said.

“Everyone joined the crew and did an amazing job. The sight of the mainsail still attached to the mast, all in one piece, was definitely a positive boost.”

The teams are currently preparing for the first leg of the America's Cup World Series, which gets underway in Cagliari, Sardinia, in late April. It will be the first time teams race their AC75s in a competition setting and, while teams are expected to launch their second race boats later in the year, will give an indication as to where each team is at in preparations for the 2021 America's Cup in Auckland.