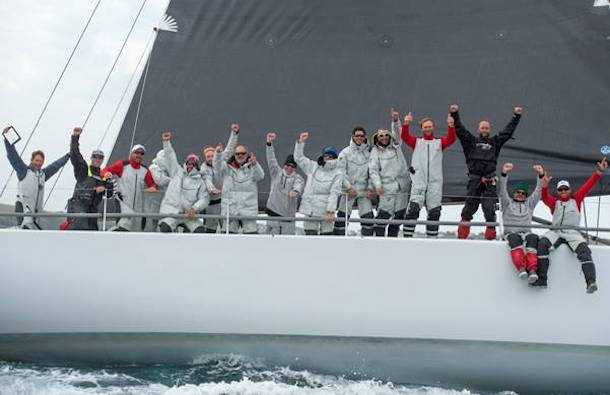 Lucky is first-to-finish in the Transatlantic Race 2015. Photo Lloyd Images.

Late afternoon, British time, Bryon Ehrhart’s Lucky was the first boat in the Transatlantic Race 2015 to cross the finish line at The Lizard, ending a brutal 8 days 22 hours 5 minutes and 3 seconds at sea on a 2,800-mile eastbound crossing of the North Atlantic, sailed mostly in strong winds.

At present Lucky holds the lead in the Transatlantic Race 2015 under IRC handicap, but the title remains under threat from boats yet to finish. Similarly, her impressive course time is likely to be bettered by the maxis which started four days after her.

“We are excited to have finished; it was an interesting test,” said Ehrhart, who earlier this year acquired his Reichel/Pugh 63 (formerly the 2011 Rolex Sydney Hobart winner, Loki) with the principle aim of competing in this race.  Erhart, a Chicagoan, is a member of the New York Yacht Club and the Royal Ocean Racing Club – two of the four clubs, with the addition of Storm Trysail Club and the Royal Yacht Squadron – that comprised the organizing authority for the race.

Navigator Ian Moore added: “Obviously the whole crew are really excited to have made it to the finish and to be the first boat home. It has been a very long night and a very long day. The beat to the finish felt like it would never end and the wind started to run out. It is a fantastic feeling to finally finish the race.”

Competing in IRC 2, Lucky set off from Newport, R.I., on July 1 with the second group of starters, including Clarke Murphy’s longer and much-higher-rated 100’ Nomad IV. Nomad and Lucky sailed neck and neck for the first few days, but Lucky took a more direct easterly route towards Point Alpha, the ice exclusion, which allowed her to reach its south-western tip 13 miles ahead.

The two boats continued due east after passing the south-eastern corner of the exclusion zone, staying in the best breeze as they determined how cross to a patch of light winds on Sunday, July 5. Ultimately Lucky made the best of it, adding six miles to her lead over Nomad IV. By this stage both boats had passed all of the first starters, which had departed three days before them, with the exception of the biggest boat in the fleet, the 138’ Mariette of 1915. Lucky finally passed the 100-year-old schooner two days from the finish, at the same time as she was splitting from Nomad IV to head north.

With the Azores High forecast to extend over the western tip of the U.K. as Lucky made her final approach to the finish, she headed north where the breeze would remain strongest for longest. Thanks to this she managed to extend her lead to more than 60 miles, but with the risk that Nomad IV, approaching from the west-southwest would come in with pressure and overtake her.

Lucky lost ground as she headed north of the Scilly Isles early this morning and was forced to beat up the narrow passage between Land’s End and its off-lying Traffic Separation Scheme allowing Nomad IV to close. But it was too little too late.

Lucky crossed the line while Nomad still had 37 miles to sail in a dying breeze. Nonetheless it was close after more than 3,000 miles of racing—in distance sailed—considering the two boats are so different: Lucky, a 63’ long stripped out racer; Nomad IV, at 100’, a much bigger boat but fitted out with a luxury interior, and also having suffered a catalogue of problems on this race.

“It was always in the back of our minds that they were out there charging along,” admitted Moore. “But it would have been a big job for them to catch up 50 miles in 12 hours.”

As to what contributed to Lucky’s success, Ehrhart commented: “It was everything. The crew is certainly the leading star in this and the boat was well prepared as was the crew. It was a good navigational plan by Soapy [Ian Moore]. We think we sailed as well as we could. They didn’t leave anything out and there was nothing I wish we could have changed. I just hope that the result stands.”

Elsewhere in the fleet, last Sunday’s starters now have the bit between their teeth and are making fast progress. All four boats—the two maxis, Comanche and Rambler 88, and the two trimarans, Phaedo³ and Paradox—have been eating up the miles, none more so than Lloyd Thornburg’s MOD70 Phaedo³. In the 24 hours until 1030 ETD (1430 UTC) she had sailed a massive 626 miles at an average speed of 26.5 knots. In the inter-maxi monohull dust-up, Rambler 88 was doing a good of job of staying in touch with the 100’ Comanche, having lost only 30 miles to her in the last 24 hours.

These boats are now picking off the rest of the fleet. Some 275 miles north of Phaedo³ is the current Cruiser class leader, Jack Madden’s Swan 60, Lady B.

“We have been doing well,” reported Lady B’s navigator J.J. Schock. “We are averaging about high nines speed over ground and everyone is in good health and spirits.” This morning Lady B was seeing 25 knots from the southwest and two-meter seas, which Schock described as having a long period, so “quite comfortable. We are sailing along on starboard tack under main and No. 3. Everything is calm on board and we’re just trying to make good speed.”

Schock acknowledges that this crossing has been particularly breezy, with wind speed having remained in the high 30s for days, occasionally accompanied by squalls into the 40s and one gust reaching 50 knots.

Being in the Cruiser class means they have the luxury of not having to eat reconstituted freeze dried food. “We have a wonderful cook on board and she is taking very good care of us. When it has been rougher, we have been having some peanut butter and jelly and crackers. When it has been nice we have had some nice meals,” said Schock.

Further up the fleet Earl St. Aldwyn’s Shipman 50 Zephyr experienced some drama last night when the shackle on the spinnaker halyard exploded, causing the kite to tumble into the water and for the boat to run over it. “We managed to recover it remarkably with no damage,” reported skipper David Sharples. “We sent George Bullard up the mast to recover the halyard at first light.”

Now up to sixth on the water, Ross Applebey’s Oyster Lightwave 48 Scarlet Oyster was this morning running downwind, but had prudently dropped the spinnaker in the early hours after the breeze had built to 30 knots. “We are pointing at the mark, but it is pretty rolly. I think we have managed to find ourselves a bit of current again, so it is heating up again. We are in pretty good shape,” commented Applebey.

The battle remains relentless against the ocean racing classics Carina and Dorade, but Scarlet Oyster is now ahead of the former on handicap, but still lying third to the immaculate S&S classic in IRC Class 4.