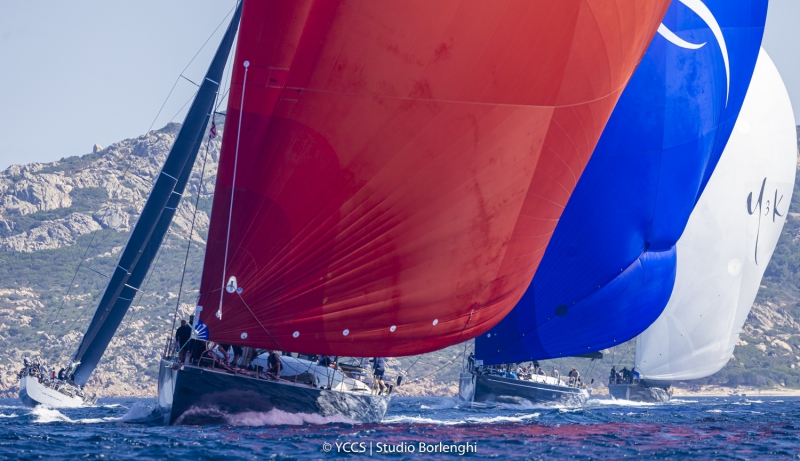 Porto Cervo: After three days of perfect breeze, the conclusive day of the 14th Loro Piana Superyacht Regatta, organised by the Yacht Club Costa Smeralda with the support of title sponsor Loro Piana, was characterised by lighter airs that allowed the fleet to set off at 1.45pm, with the Multihull division,

With a breeze from the east between 8 to 10 knots, both the Multihull and Superyacht divisions were faced with a course of about 15 miles, which brought them to round the Monaci islet, leaving its distinctive lighthouse to port to enter the Golfo delle Saline and round the Secca di Tre Monti, before heading for the finish off Porto Cervo via the Bisce pass.

The fleet taking part in the Southern Wind Rendezvous, meanwhile, sailed to Cala di Volpe Bay where they anchored for lunch before returning to Porto Cervo marina for the Prize Giving.

In the Superyacht division, the 33-metre Missy clinched another race to finish with a perfect score of four from four wins. Second place overall went to the Swan 115 Shamanna – fourth in today’s race – and the final step on the podium went to the Wally Y3K, owned by Claus-Peter Offen and with Karol Jablonski calling tactics, after a second-place finish today.

In the Multihull division the leader of the day and the overall winner was the Gunboat 68 Highland Fling, with tactician Cameron Appleton. Second place overall went to the HH66 R-Six, just one point ahead of Allegra in third, for whom a second in today’s race was just not enough to climb up the overall standings.

The SW94 Aragon, racing in the Superyacht division, received the Southern Wind Trophy.

“It was a fantastic four days in terms of the conditions and the racing,” commented YCCS Commodore Michael Illbruck,

“The owners and sailors were really happy to be here and to be back on the water sailing again, a very positive signal of reopening for everyone. My thanks go to the competitors, the Race Committee, the Jury and the entire YCCS staff for contributing to the success of this event.”

Matthew Humphries, tactician on Missy: “We’re very happy to come back here after being away for so long was remarkable. We’re overjoyed. We just wanted to come here and hit the ground running, picking up from where we left off in the last superyacht race we did a year and a half ago. We’ve enjoyed Porto Cervo a lot and I’m sure we’ll be back.”

Cameron Appleton, tactician on board the multihull Highland Fling XVII: “A fantastic week. I’m really pleased that the YCCS brought in the multihulls at the Loro Piana, a welcome change, these are showing to be fantastic boats.

“We had some really close racing, especially with the Allegra team. A perfect week. Four great days of sailing. The team did a phenomenal job, it’s our first time on this boat so we had quite a steep learning curve and we’re now sailing a lot differently. We had a great time, how could you not in Porto Cervo, in this scenery.”

The racing season at the YCCS continues with the first Swan Sardinia Challenge – The Nations League, scheduled from 21 to 26 June and dedicated to the one design classes from the Finnish Swan shipyard.