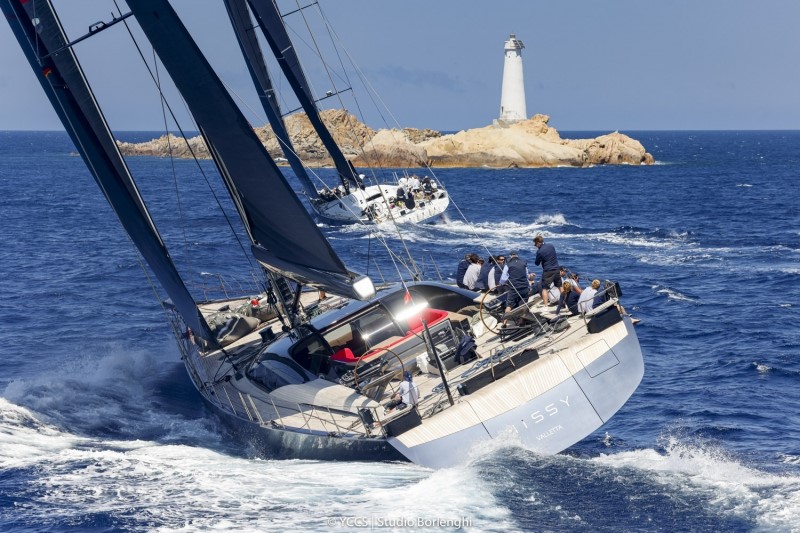 The Multihull division started on schedule at 12.30 p.m., with the Gunboat 68 Highland Fling pulling ahead from the off and gradually stretching her lead to claim first place in both real and corrected time. Second place in today’s race went to Allegra, the largest catamaran in the fleet at 25 metres, while third place was secured by yesterday’s winner, the HH 66′ R-Six. The multihulls reached remarkable speeds of close to 20 knots on the reaching legs in today’s conditions. The provisional ranking after two races now sees Highland Fling XVII in command, just a single point ahead of R-Six. Slightly further back in third position is Allegra, who was disqualified from yesterday’s race due to a protest.

The Superyacht division’s staggered start saw individual departures spaced 3 minutes apart, with the fastest boat being the last off the line. The fleet came together while rounding the island of Soffi, before the largest and fastest yachts, the Farr 100 Leopard 3 and the Swan 115 Shamanna, on the run back towards Porto Cervo began to overtake the boats that had set off first. There was no lack of excitement on the water with the crews – always in compliance with the safety regulations at sea – intent on manoeuvres and sail changes, and the imposing, colourful gennakers contrasting superbly with the blue skies and turquoise waters.  Victory in corrected time once again went to Missy, the 33-metre yacht designed by Malcom McKeon and built by Vitters, which with two wins now sits firmly at the top of the provisional rankings. Claiming second place of the day, the Swan 115 Shammana also sits in second in the general classification followed by the SW94 Aragon in third. Y3K, which placed second yesterday, was forced to retire today due to a technical issue, causing it to slide into fourth in the provisional overall classification.

Cameron Appleton, tactician on Highland Fling XVII: “It was a phenomenal day! I think the race committee choose a really good course for the wind direction that really suited the multihulls with a lot of fast reaching. It was a really exciting day, and huge enjoyment came out of the day not only because we had a successful day but out of the style of the course, the speed, the angles we got to sail. The owner was really ecstatic not only about the way we sailed but the performance of the boat. The boat did it for him today. We had an amazing day. The conditions were a little bit more than what was predicted forecast wise, but we couldn’t have asked for more.” Racing continues tomorrow at 12.35 p.m. with winds of between 11 and 13 knots from east-southeast forecast.