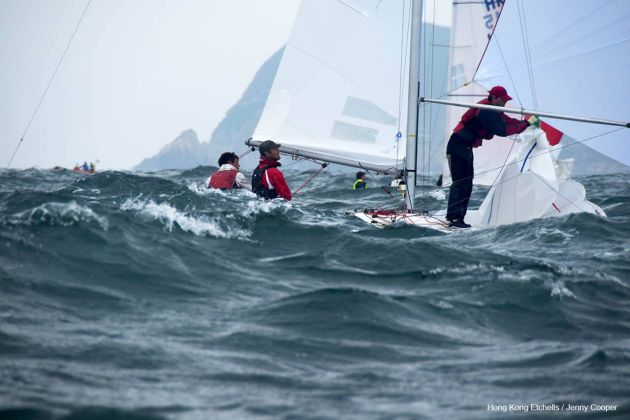 The third and final day of the Etchells Asia Pacific Championships got off to an early start, with the first warning signal sounding at 1000hrs. With 15 to 17kts of consistent north easterly breeze and a 1 to 2m swell, Race Officer Kevin Wilson set a course of 1.7nm and sounded the warning signal on time. For the first time in the regatta, a general recall was required as a mass of Etchells decided to push the envelope and ended up over the line before the gun.

Cue the ‘U’ flag to bring the unruly boats back into line and race 5 finally got underway with a clean start, with 34 boats still in racing order.

At the first windward mark rounding, it was Marvin Beckmann on The Martian who led the fleet after a 20 minute beat up the left, albeit with the other title contenders hot on his transom. Beckmann managed to stay out in front all the way to the finish to record his first bullet for the regatta, ahead of Scimitar, Racer X 2 and Swedish Blue.

Wilson wasted no time in starting proceedings for the sixth and final race of the Asia Pacific Championships, with a super competitive fleet forcing another general recall and another display of the ‘U’ flag, which had the desired effect of calming things down.

Ante Razmilovic’s Swedish Blue led the fleet around the first windward mark, however it was to be Marvin Beckmann’s day as he took control on the downwind leg to claim a double for the day, with Racer X 2 following up in second and Swedish Blue in third.

The final downwind leg proved to be the clincher for the overall series winner.  Heading towards the finish with only five minutes to go, Steve Benjamin on Scimitar seemingly had it in the bag.  Even if Racer X 2 beat Benjamin by one place, Scimitar would still take the series.

Swedish Blue in hot pursuit of both was also able to get through Scimitar giving Mark Thornburrow’s Race X 2 the series in spite of not recording a win throughout the regatta proving that consistency pays, with Steve Benjamin’s Scimitar finishing second, also with no wins.  Swedish Blue took third overall

Back at Kellett Island, Thornborrow said  “We were really trying hard to get him (Benjamin) on that last leg, but we never thought we would put a boat between us”.

Swedish Blue pulled themselves up into third place, pushing Jake Gunther’s The Boat into fourth and The Martian into fifth, in spite of Beckmann having an extremely good last day at the office.

The crews now have a five-day break from the water, giving them a chance to ready their boats for the 2015 Etchells World Championships which gets underway with a practice race on Sunday 1 November and continues through to 7 November.