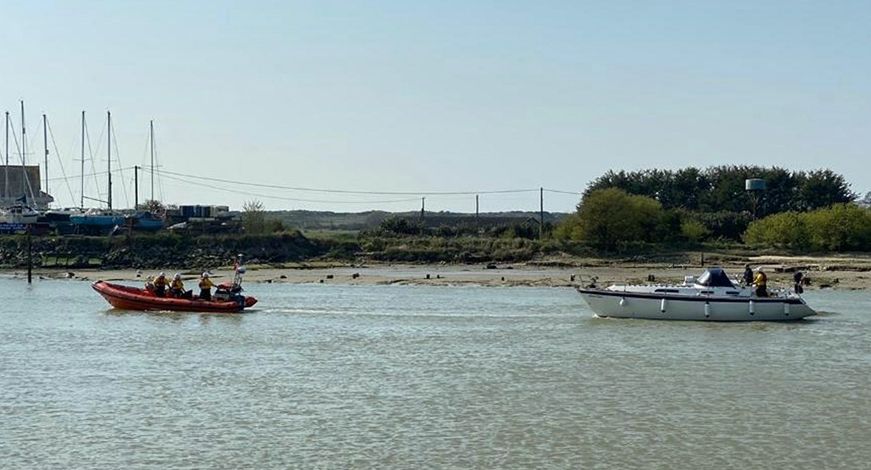 Littlehampton lifeboat Renee Sherman tows the dismasted yacht back to harbour with an RNLI crew member at the yacht's helm. Photo RNLI/Ritchie Southerton.

Littlehampton RNLI’s B Class lifeboat 'Renee Sherman' launched to rescue a 38 foot yacht with two persons on board which had lost it’s mast five miles south of the harbour.

HM Coastguard tasked the RNLI to assist a yacht which had suffered a catastrophic equipment failure, the loss of it’s mast, despite a relatively moderate force 4 north-easterly wind. The volunteer lifeboat crews are not currently undertaking water based training due to Coronavirus restrictions, but in an emergency they are still available 24/7 to save lives at sea.

Skies were clear, but visibility was limited due to haze. The four lifeboat crew arrived on the scene to find that the two persons on the casualty vessel had cut away the rigging to jettison the mast. Although there was some damage to the deck and side rails the vessel was not holed. The yacht’s crew were checked and found to be uninjured, but they were shaken by their experience and very grateful to have the RNLI charity’s willing team there to help.

The decision was taken to tow the yacht to Littlehampton harbour. One of the lifeboat crew stayed on board the casualty vessel to make good the tow line and ensure safe passage through the harbour narrows. An hour later, the yacht was brought alongside the easterly pontoon and the lifeboat returned to the boathouse.

Lifeboat helm, Ivan Greer, said, “Although the winds were not particularly strong, the mast of the yacht appeared to have detached from it’s mounting on the deck. We quickly assessed the damage to the vessel, ensuring that it was not taking on water, in preparation for putting the yacht on tow. By the time we were underway the tide had moved both vessels a further 2 miles to the east meaning the tow back to Littlehampton took about an hour.

“The shore crew were waiting at the boathouse to recover the lifeboat and ready it for service – it’s important to remember there are many people behind the scenes which enabled us to rescue this vessel and her crew today.”