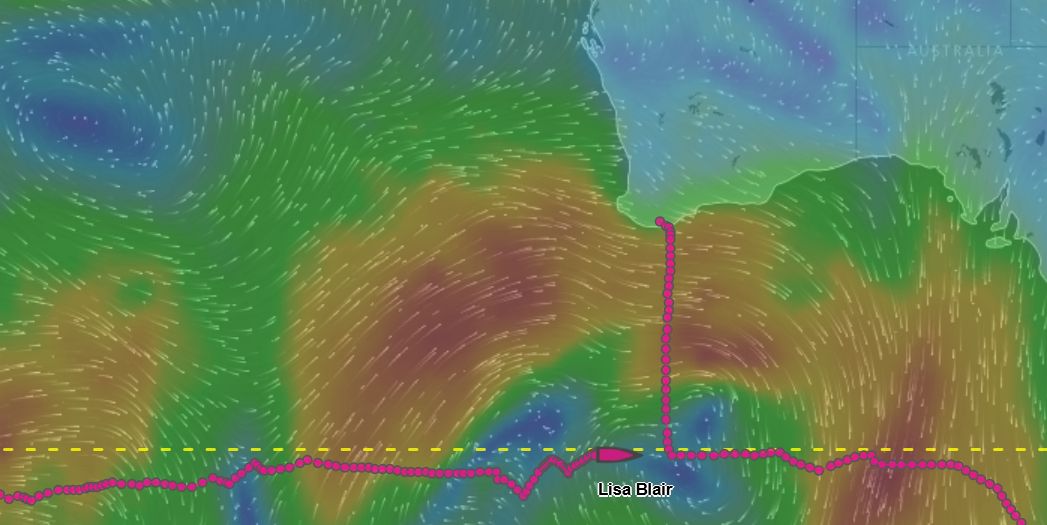 Lisa Blair is about to become the first woman to circumnavigate Antarctica below 45 deg S. At 6am on July 21 she had just 720nm to go to the finish in Albany but she is likely to cross her track and complete her circumnavigation later today.

Last night I was right in the middle of my Easterly storm.  This was the first and only easterly storm of the whole trip and as usual they always arrive at the most inconvenient time.  An easterly storm meant winds 30-40 knots form the east right when I was sailing towards the east so it has slowed me down a touch on my arrival to the waypoint.

So last night the winds built to 30 knots around 8pm, I was already sailing with the second reef and decided to put in the third as I knew more wind was on its way.  Up until midnight the winds remained steady at 30 knots however in the wee hours of the morning the winds hit their peak.

I was lying in bed waking up on the hour to check the wind direction.  For most of the night the winds were blowing from the east to East South East direction. I was sailing North East on a starboard tack making my pipe cot of a bed on the low side of the boat.  This worked out well as I was able to get plenty of sleep between my checks, mainly because I didn’t feel like I was about to get thrown out of bed.

Climate Action Now was leaning over on a sharp angle from the wind and we were crashing up, down and through the building swells.  At 2am I noticed the winds were mostly 40 knots and as I laid there they built to 45 knots in a gust.  I was still sailing with the third reef in the main sail and the storm jib but didn’t feel the need to put the fourth reef in.  Mainly because when the winds got to strong the boat would simply round up into the wind a touch and depower the sails, also, as I was trying to keep making the best course to windward I needed to have a rather large mainsail to do this. I felt that if I was to put the fourth reef in the sail I would likely just drift sideways rather than forward.  The mainsail is exactly that, the 'main sail,' and without it you don’t get to windward very well.

So lying in bed, I watched the conditions for a while and when I was satisfied that Climate Action Now was holding her own in this storm, I went blissfully back to sleep.  I did keep my checks happening as I was waiting for the NE winds to fill in. I was then to tack to the SE direction, however they never arrived in the night. It wasn’t until mid-morning that they finally showed up, in a rather abrupt way.  I had just woken up when I noticed that the winds were now back to 30 knots on the average.  I completed a log and was about to set about making breakfast when the winds started to ease off.  I knew that they would ease quickly but I didn’t think in 20 minutes that I would have gone from 30 knots to 5 knots, but that is exactly what happened.  I went on deck and looked around.

Yep I had arrived to the very centre of the storm, where there was a lovely wind hole that apparently had my name on it.  I had sailed further north in the night than intended as I was supposed to tack on the NE wind shift so I guess that this also means that I was going to deeper into this wind hole than planned.

Great, a day of drifting.  There was also still 6-8 meter swell around so the boat was getting rolled around something chronic.  As I looked around I suddenly felt sea sick…  You have got to be kidding me I thought but there I was getting ready to unfurl the genoa and I needed to pause to hang my head over the side of the boat.  I threw up a bit of water that I had that morning and nothing else thank goodness.  Now that I was feeling a bit better I really needed to get on with trying to get the boat moving in 5 knots of wind.

I was still set for 30 knots so I had the third reef in the main sail and the storm jib up.  The winds had also finally shifted to the NE so I decided to tack the boat first and then shake out the sails.  After the very slow tack I unfurled the genoa as this was a simple sail to get out and would help give me some steerage while I shake out the reefs.  When I leave port is the only time I need to hoist the main sail so high in one go but this morning before I had even had breakfast I spent a solid 20 minutes getting my upper body workout as I ever so slowly winched up the main sail from the third reef to its full height.  Once that was done I needed to spend a bit of time tweaking the sail trim until the boat started to move.  For the next few hours I was lucky to have NE to NNE winds at 8-10 knots and we started to move again.

As the day progress the winds started to build reaching the 15-18 knot range so it was time to furl away the genoa and unfurl the stay sail. I left the full main sail up for the time as i wasn’t sure if this was just a short burst or if the winds had settled in.  The sky was a bleak grey and there was a large section of rain on its way to me so it was possible that this wind wouldn’t last.  I was wrong however as the winds maintained 15-20 knots for the rest of the day and into the early evening.  Around 8pm the winds started to gust 23-24 knots, so I put the 1st reef in for the night and prepared to get some sleep.  It is now just past midnight and the winds have built to 25-30 knots so I just braved the deck and put the second reef in the main sail and furled away a small amount of the stay sail.  The winds are now also from the SE so I have tacked and I am again heading NE towards my waypoint.  230nm to run before that big and important left-hand turn.