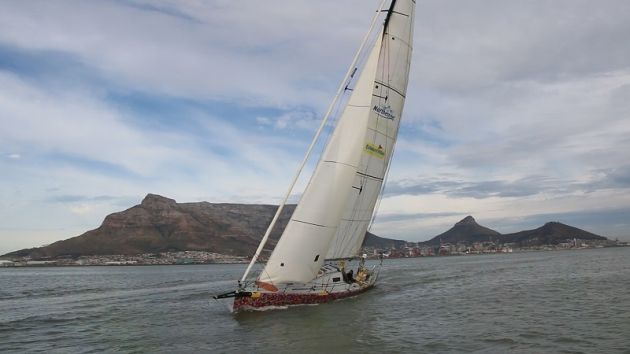 Lisa Blair's attempt to become the first woman to circumnavigate Antarctica solo, non-stop and unassisted came to an abrupt halt south of Cape Twon when she lost the rig on her yacht Climate Action Now. Undeterred, she headed for Cape Town under jury rig and after considerable help from sponsors and locals, she has resumed the journey. Obvioulsy the non-stop and unassisted elements are now gone, but the goal of beocimg :first woman” s still alive.

Lisa left Cape Town on June 12 and is currently heading back to the point where the mast was lost. Here is her update:

Well it has finally happened.  I have slipped lines, hoisted my sails and left South Africa.  This last few weeks have been extremely busy with completing the final preparations on the boat and signing off on the sea trials.  While Cape Town was an unexpected stop over, I did make some wonderful friends.  I would also like to do a shout out to all the businesses that have worked overtime to get me up and running again. Thank you to Wichard Pacific, Arcus Wire and Rigging, Harken, Quantum Sails, B and G, My Yacht, Edward Williams Marine Insurance and Northern Reef Insurance.  I would also like to thank all the local Cape Town businesses that have also worked overtime getting me to the start.  Associated Rigging, Action Yachting, C-marine, Royal Cape Yacht Club, V and A waterfront and MRad.  Without all this support and the incredible donations coming in I would not have been able to get Climate Action Now sailing again.

Yesterday was a huge day for me.  I worked on the boat until 1am completing the finishing touches, woke up again at 6 am rushing to get the last things done before I enjoyed my last breakfast on land with some of my new friends.  I had scheduled for an 11am departure from the Royal Cape Yacht Club so that I would be sailing across the unofficial start line as close to 12 as possible.  As with all well laid plans they rarely workout. It was at 10am when Charles from C-Marine came over to let me know that there was a last-minute fault with the genset and it will be a few more hours until I can sail.  The VCR controller inside the generator (the brain if you will) had a loose part which was the reason it worked fine yesterday but today was not wanting to play nice.  We were in luck though as Steve from MRad is an electrical wiz and could repair the unit.  So, Charles drove the part to Steve across the city while I informed every one of the slight delay.  One extra bonus of the delay meant that I was able to get in one last hot shower amongst all the rush.

So after re-installing the VCR and running the genset to check that it was working I was given the all clear to depart.  Over the last few days I have been getting random butterfly's in my stomach and when Charles said it was good to go they returned full throttle…  I don’t believe it’s possible to do something like I am doing and not experience a few pre-departure nerves even though I have complete confidence in my boat and my ability to see myself safely home.

So, with a last-minute blur of hugs I cast of the dock lines and reversed Climate Action Now out to sea.  The winds were 20-25 knots from the west on departure and there was this horrible 3-4-meter sloppy swell so I decided to hoist with 3 reefs in the main and the stay sail (the smaller jib) out initially and then I can shake a reef later once I have eased back into it.  With my mainsail, up and my friends next to me on their boat Picasso, I started motoring out the harbor entrance.

Officially in compliance with the World Sailing Speed Record Council my time has never stopped and they have counted all the time I was in Cape Town towards the overall record of being the first women to sail solo around Antarctica. They also consider the trip assisted now as I needed to use my motor after the dismasting and I received fuel from a container ship.  So in keeping with the rules I had Luke a national Judge on the dock to witness that I departed solo.

Unofficially I wanted to take my departure time as well as my time when I cross my track at the dismasting point so that I have an idea on how long the voyage took, so, I set up an unofficial start line of the light house off Green Point and Robbin Island.  I crossed this start line at 1705:12 and recommenced my journey.  I am just so excited to be sailing again and finally be on my way home. I have been away now for almost 5 months, so I am ready to sea Australia again.

The conditions at the start were grey skies filled with scattered showers and winds 25 knots gusting 30 knots. the swell was so messy that I started to feel sick and needed to take some time out just to not vomit…  But once I got offshore a bit the swell settled down into a reasonable 3-4 meters from the SW. I stayed on deck until after dark and shook out the main sail to the second reef just before going below.  I didn’t manage to eat anything and laid in my bunk watching the AIS and radar as there were HEAPS of ships around and fishing boats.  I managed to avoid getting too close to most of them but I did sail near a fishing ground at around 1am so I needed alter my course around them. I then sailed through all the container ship traffic lanes as they pass below South Africa so it was well past 3 am when I managed to grab some snatches of sleep.  I also got down 2 muesli bars and my nauseousness was abating.

Sunrise greeted me at 8.30am local time with another grey wet day. Apart from being tired I am feeling okay today and am happy with the progress I have made.  Climate Action Now seems to be really happy to be back at sea again just like her owner.

So the plan is to sail back to the position of dismasting, cross my track and then sail back to Albany.  At the moment, the sea temp is 18.8 degrees but in 2 days’ time it will fall below 5 degrees as I sail through the Antarctic convergence zone.  There are also quite a few low-pressure systems coming through but none look any worse than what I have already sailed through however I am dreading the cold…  Burr…  I will be blogging daily now so I hope you enjoy the journey with me.

P.S. For those who done use facebook,  here is a link to a video as she is leaving.
Linda (mum)