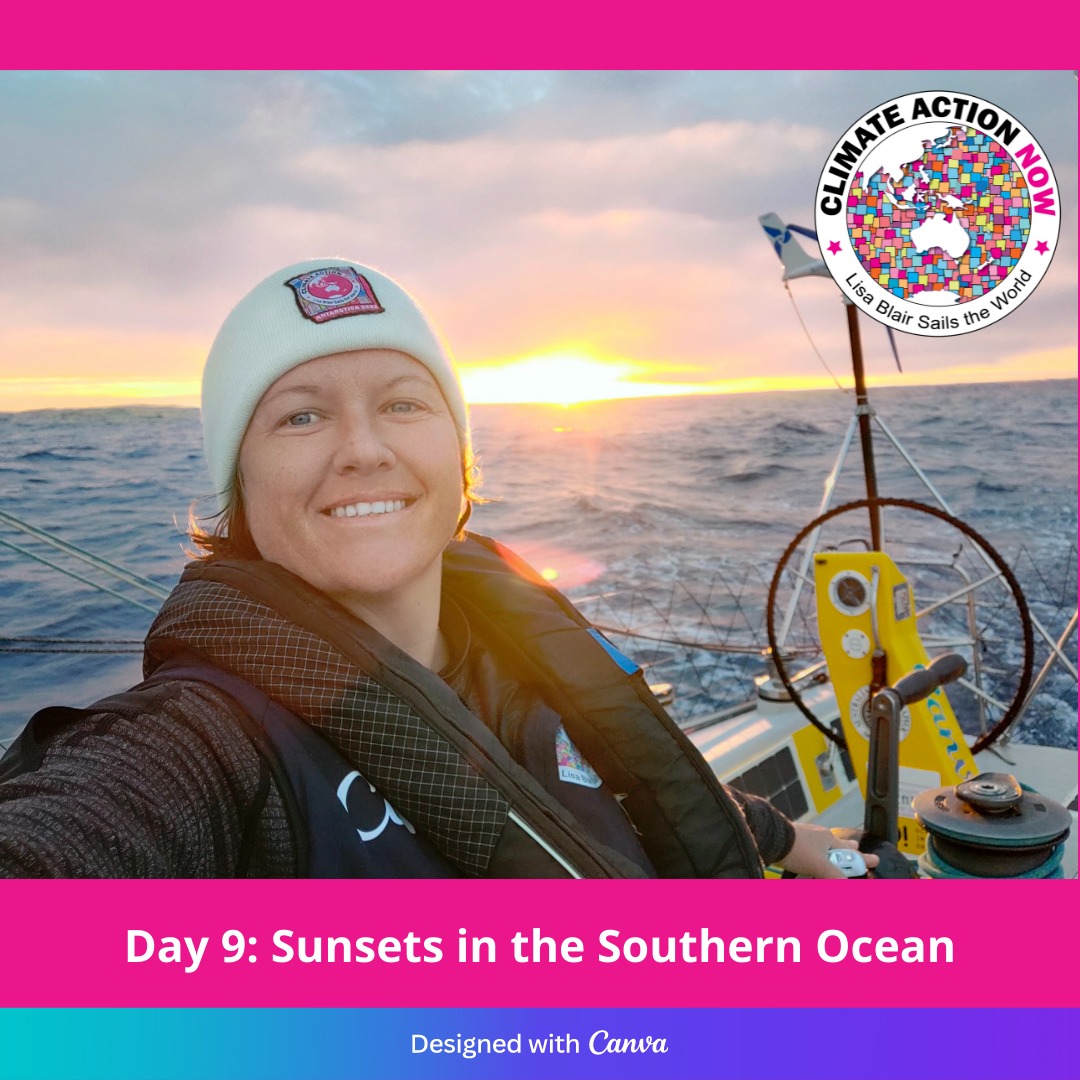 A stunning sunset in the Southern Ocean. Pic - Lisa Blair

In her latest blog post, Blair describes her sleep routine in the Southern Ocean and how she will repair a pesky alternator.

I think I managed to get to bed around 2am for a few short hours before I needed to wake up at 5.30 for that radio interview at 5.40am my local time.

The winds eased off yesterday and remained light throughout the night however they did shift around a little from the N to NW to NNE and back again, so I was routinely up on deck trimming the sails. It took me a while to manage some sleep.  The bits of sleep I did get were great. I did go back to bed after the radio interview for another two hours and I woke up feeling much better for it.

It is important as a solo sailor that I still abide by rule five of the collision regulations and that is the rule to always maintain a good lookout by all available means, this includes the AIS system and the Radar.  And from my years of ocean sailing, I have learnt that you can never rely on the other boat to spot you. You must be keeping a lookout yourself, so I have built a system of sorts over the years to manage the sleep and balance a safe watch.

When I am close to land and known hazards like high shipping, fishing zones, islands or anything that could prove a hazard I tend to stick to 20-minute intervals of sleep. That doesn’t mean that I have a single 20 minutes and then be up again, but instead I wake every 20 minutes and check the instruments for traffic or hazards. If the winds have changed or remained stable, I scan the horizon for lights and then go right back to sleep.

The idea is that you never completely wake up so you can stay in a half-awake, half-asleep state which makes it a bit easier to get to sleep on the next 20 minutes. It’s not great, but it does allow you to get some small naps in. You can maintain this for six hours or more if needed.  When I set the record sailing solo around Australia, I was within hazards the whole time so I didn’t sleep for more than 20 minutes for the whole of the 58 days of the trip………which, let’s face it, totally sucked. Sleep was just as much a part of that challenge as the sailing.

Out here though I am so so very far from everyone that my closest hazard is icebergs. Thankfully I am still too far north for them at the moment and the sea temperature is a little too high still, so they are not really a risk right now.  During the last Antarctica record there was possibly two or three times when a vessel came close enough that I might have spotted it on AIS or radar, but I only every saw one ship on AIS throughout the whole circumnavigation.

Bob McDavitt who is doing the weather for me would sometimes put in his emails that there was a cruise ship that is likely to pass 200 nm to the North of me, or similar so that I knew there was someone around. In remote waters like this it is relatively safe to sleep for longer periods, so I am getting in anywhere between 40 minutes and two hours depending on the winds, boat speed and local conditions. So, while last night I didn’t get a lot of sleep every other night I have managed a steady 6 hours a night. I am feeling as rested as I can be.

Another thing that I do, just while we are on the topic of sleep, is something called sleep banking.  I realise that you can’t actually bank your sleep, but the idea is to always operate on the highest level of rest that you possibly can, this is because you never quite know what is around the corner. You might find that you are suddenly facing a survival situation and need to be awake for 30 hours straight, so by taking every possible opportunity to rest or sleep I am always ready if anything comes my way.

Enough about sleep. After a hot bowl of porridge, I ended up spending most of the day working away on the generator in the back Lazarette compartment. This is basically a storage compartment that you gain access to through the hatch on the deck just in front of the helms. Standing on the bottom, which is the hull of the boat, the hatch only extends up to cover your hips, so it is a really shallow section of the boat.

Inside homes the eight weather drifter buoys from the BoM and some tubs with spare parts in them as well as the new (second hand) generator that Chris from LMH Repairers, Albany and Refuelling Solutions kindly sponsored and installed for me in Albany.

One of the things I noticed is that the alternator isn’t putting out enough amp hours to charge the batteries efficiently, so I crawled back and after some communications we decided that I would apply some extra throttle to the setup and that should do the trick.

Unfortunately, it hasn’t changed so we are now on the phone with the wonderful Bruce from Safiery on the Gold Coast and Wayne from GME Electrical in Albany to work out why. It was a little tricky to get anywhere today as we were communicating mostly though text messages, but I am hopeful that a solution will be found soon. I am expecting to be running around with the voltmeter for much of tomorrow.

I also aim to use the last of the light winds that I am currently sailing in to go around and sponge out the bilges, do a full boat inspection and just make sure that everything is ship shape and storm ready because it looks like I have a bit of wind arriving on Friday.

So before signing off I would like to take a moment to thank the following 360 degree sponsors for your support, thank you to:

126 E – Mark Toohey in memory of Peter James Toohey and an extra thank you for volunteering on Climate Action Now in Albany before I left.
127 E – SV No Regrets to Jo and Chris who I also had the pleasure of meeting in Albany
128 E – d’Albora Marinas – Horizion Shores, Gold Coast and my first sponsor
130 E – Aviso EIA Insurance Brokers to Shane Risby for your awesome support.