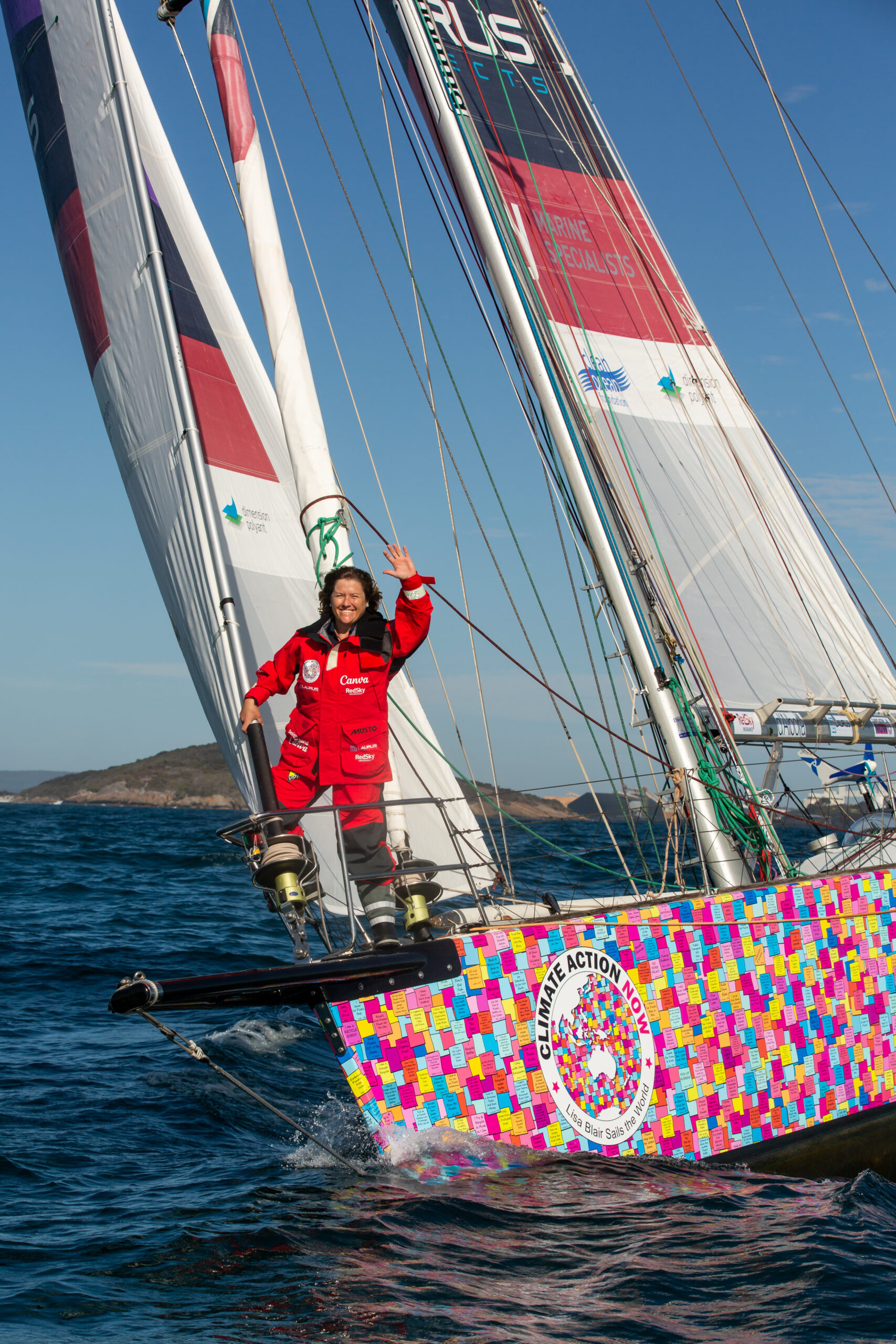 In her latest blog post, Blair makes the most of a “good day at sea”. And she is looking forward to passing the Kerguelen Islands. Once she does, there are no more landmarks to pass, just the finish line in Australia.

Well after getting to bed at midnight last night I managed to have a halfway decent sleep, however I still felt like I could use some more when I woke up. I needed to get up at 0800 to change over the micro plastic sample, but I went right back to bed afterwards. At 1000 it was time for the second micro plastic sample change and as I was still feeling a little tired, I decided to try to get another hour sleep. I have been sleeping a lot lately, but I need it after all that time with no sleep across the South Atlantic.

I expected that I wouldn’t sleep that long however I managed to stay napping for most of the day and finally dragged myself out of bed at 3pm. By this time the winds had really started to ease but we still had a large five metre swell around so the boom was banging backwards and forwards as Climate Action Now would pitch and roll in the swell.

I went on deck to adjust the sail plan, and as I knew it was likely to be lightish winds for the rest of the day I opted to pull the full mainsail up the mast. I needed to winch up more than 50 per cent of the main sail, so it wasn’t going to be a quick manoeuvre. After about 15 minutes on the grinder, we finally had the sail up. I had been watching the winds while winching up the mainsail and I hadn’t seen any winds above 16 knots, so I decided to also get out the larger light wind number one jib. Once I had this out, we started cruising along again.

I went back below to make a bowl of porridge. I was planning on using the easy oven, but sometime in the night we must have healed over so much that the saucepan and lid that were sitting on the port side bench had decided to get flung to some place in the boat. As much as I looked, I couldn’t seem to locate the lid, so I ended up making the porridge the old school way on the stove.  After that I checked my emails and downloaded a weather file to see what conditions might be on the horizon. I have a thin high-pressure belt that will pass over and then we have westerly winds blowing in that will hopefully give me a great run to the finish line.

The day remained overcast with that trending Southern Ocean grey skies and a light misty rain, so it was a nice day to be hanging out inside the cabin. The upside is that the temperature was still sitting up at 10 degrees making for a relative warm day, however once the winds swung to the SW from the WNW, I needed to gybe, and the temperature plummeted down to 4c air temperature taking us into glove wearing territory.

By 10pm the winds had started to arrive and we were starting to see 18-20 knots of wind so I went back on deck to change over the head sails, furling away the No 1 jib and un-furling the no 2 jib that is smaller and built for stronger winds.

Dinner was a lovely coconut curry with some naan bread, and before you know it I was once again needed back on deck to put the 1st reef in the mainsail. The winds were now creeping up to 25 knots and above.  Normally I could carry a full main in this for a bit of time however the winds have swung to the south, so we are now sailing upwind on a close reach, making our apparent winds stronger.

So now while I am sailing into the wind, I have 20 knots of true wind and a boat speed of six knots, so I am feeling a wind of 26 knots. That is too much for the full mainsail.  I ended up debating between going for the first reef or skipping that and going directly to the second reef, but after checking a new weather file I decided to wait and just put in the first reef for now.  If it becomes too much, then it is a simple case of going back on deck to put the second reef in.

I am now starting to sail across the top of the Iles Kerguelen which is 200nm to my south. Once I finish sailing past that I will be about to reach the point where Australia becomes the closes bit of land to me. That is when I will finally start to feel like I am on the home stretch.

But for now, aside from some sail changes and lots of sleep there hasn’t been too much happening today which just means that this is a good day at sea.  When I am working hard it is normally because of bad conditions or breakages that need fixing and those make for harder days at sea. So, on this good day at sea, I would like to take a moment to thank the following amazing degree sponsors.

064 East – d’Albora Marinas – Nelson Bay, Port Stephens NSW.  Huge thank you to d’Albora Marinas for being such an incredible support and can I say this location at Nelson Bay is a lovely marina, very centra to town and shops with lots of cafes and restaurants nearby making for a lovely stop on your getaway.

066 East – Control Technologies – Thank you to Erwin for jumping aboard in the early stages of degrees to give your support for the citizen science work that I am undertaking while sailing around Antarctica.  Your support is really appreciated.