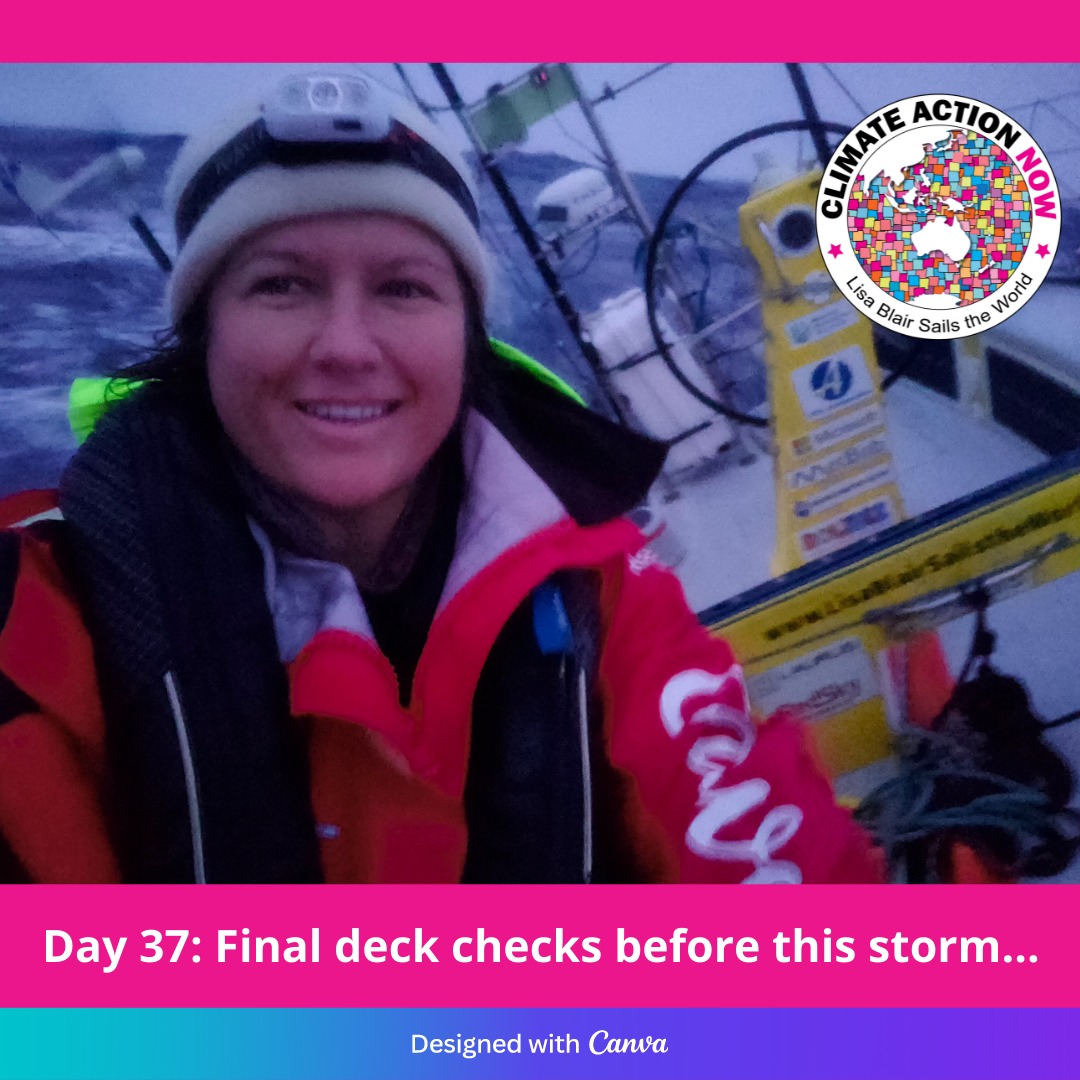 Windy and cold weather in the Southern Ocean. Pic - LB

Oh what a long 24 hours I have had. Buckle up because it’s a long one.  Last night the winds were so frustrating as they were mostly from the NNE, so I was sailing close hauled. This means that the sails are winched on tight, and we get heeled over at a sharp 45 degrees, so life is instantly more difficult.

I knew that this storm was arriving tonight, so I was really pushing for course and trying to make the best course to the NE as possible with the conditions, but it was just frustrating.  I had three reefs in the main sail and the storm jib up and we were going nowhere fast at the very slow speed of 3-4 knots. I was close to pulling my hair out with frustration because if I could have just come away from the wind a little I would be making a much better speed.

I didn’t think that the storm jib was enough sail on the bow or far enough forward in the 35 knot winds so climbed back on deck after finishing yesterday’s blog at 7.30am and finally decided to just unfurl a smidgeon of the no 2 Jib. This would, in theory, put a little more sail further forward, allowing us to get a better lift effect and drive Climate Action Now through the building swell.

I put the smallest amount of sail out, about 3m squared and gosh, what a difference that made.  With the fabric being built by Dimension Polyant and not having the whole of the sail out I knew that it would be strong enough to take the gusts that were reaching 40 knots and we were now happily sailing at 7-8 knots, just skipping along on the waves.

I was feeling the cold by the time I got below, and I still hadn’t made it to bed. I heated up my hot water bottle, brushed my teeth and finally collapsed in my bunk. It was 8am now and I needed to be up at 3pm for a pre-scheduled podcast with WWSA sailor and founder of Sistership Training Jackie Parry.

Slightly bleary eyed I made the podcast interview. It was a lot of fun chatting with Jackie again. I actually raced with her when we competed in the 2019 Melbourne to Hobart Yacht Race as the first ever double handed (two person) crew to compete, so it was a nice catch up all the way from the Southern Ocean. By the time we wrapped up it was almost dark, so I jumped out on deck to take a look at things before nightfall and to check that everything was going as it should.

We were bouncing all over the place, so I decided before nightfall to shorted the sails a little and furl away the No 2 jib and put in the 3rd reef in the mainsail as i was only expecting it to get worse as the night progressed. The winds had now backed a little and blowing from the NW, so I was able to ease out the sails a little too in an attempt to flatten the boat out a bit. We were leaning over so far and drifting sideways so much that the lower half of the boat was basically just underwater, but after some adjustments I was able to get us going along a little better.

Back inside and I had two whole hours until I needed to change the first micro plastic sample so I decided, given that I hadn’t managed much sleep that I would try to get a nap in. Even if I don’t sleep it is at least rest for my body because just sitting up, right now is difficult.  I was also feeling the chill from getting a wave down my neck, so I decided to heat up the hot water bottle.  I was getting really excited for the afternoon nap as I hadn’t had much of an opportunity to catch up on sleep. It felt like a bonus.

I climbed into my bunk and snuggled deep into the sleeping bag hugging my hot water bottle and shut my eyes. Not five minutes later and all the alarms trip on the auto pilot. Auto pilot off course, rudder limit etc and my attempt at sleep was interrupted. Looking at the B & G display that was in front of me I could see we were getting a sustained gust at 45 knots and Climate Action Now was not happy about it.

I wasn’t just going to rush on deck because I felt that five minutes later it would lull again and I would then be under powered and going slow, so I tried my best to ignore the alarms and opted to keep my eyes shut for a few more minutes. Ten minutes later, the winds had been holding above 40 knots and gusting all the way up to 47 knots. I knew I needed to go on deck and put the 4th reef in the mainsail. I wasn’t too impressed with the weather gods in that moment because I needed to leave my very warm and cosy bunk for the bitter cold.

I put all my Musto wet weather gear on this time and carefully made my way on deck only to cope a wave right to the face the moment I looked outside the cuddy. Not that it mattered because there was so much sea spray and rain around that I could barely see. I set about putting the fourth reef and just as I finished a huge wave broke against the side of the boat and completely engulfed the cockpit in spray. Sea spray managed to target me in a direct hit.

I had been grinding in on the main sail, so my back was to the waves and my spray hood had fallen down just minutes before, so when I was struck by the water everything exposed was instantly soaked. I could feel the force of the impact driving the icy water through my beanie, soaking my head before traveling down past my neck warmer, and into my wet weather gear where it dribbled down my back and chest.  Okay, so now I was cold.

I finished up on deck because there was nothing to be done about how wet I was and made my way below.  As I am sure you have all seen, I am wearing one of our new signature beanies that are limited edition and available for purchase.  They are made from ethically sourced Marino Wool that’s undyed.

The reason that Marino Wool is so amazing is that it will keep you warm even when wet, so when I got below, I wrung the water out of it, gave it a brief rub down and squeeze with a towel and after giving my hair the same treatment I banged the beanie back on my head and it felt like it was almost dry again.  My neck warmer and wet under layers got the same treatment before I set about making some dinner. I was in need of some fuel for my system, so I made one of the freeze-dried green curries that I have aboard.

After dinner it was time to complete the second change of the micro plastic samples and I needed to make a call on if I was going to hove to tonight or not. Hoving to, is where you put the jib on the wrong side of the boat by tacking and not changing the sails over. You then lash the helm to windward and the combination of your jib being on the wrong side, mainsail in the middle and the rudder over stalls the boat out. You end up drifting sideways.

As you drift you are displacing water and creating a slick on the surface of the ocean, this slick becomes like a protective barrier and will break the waves or calm them before they hit the boat giving you a little bubble of safety in extreme storm conditions.

I was only planning on hoving to if the conditions deteriorated to the point where this became necessary to ride out the storm but in the last few hours while I have been watching the winds it didn’t seem like I would need to just yet.  The swell was occasionally breaking against the hull, but it wasn’t large enough yet to be an issue. it was forecast to build to around eight metres (a three-story building) in the early morning, but for now it was still around five meters, and on my beam, so we aren’t getting those knockdowns like we were in the last system.

What I could see happening was that when the winds were are 35 knots we were sailing and making grounds the right direction. The goal is to keep getting a little further north to outpace the worst condition on the storm following this one. But when the winds were ripping through at 45 knots + we were getting rounded up and pinned on our side and pushed sideways with the winds and the autopilot was trying to correct our course it would put the rudder all the way to starboard.

This meant that almost, unintentionally, we were hoving to. The only difference was that as soon as the winds eased the rudder would finally take effect and we would be off sailing again.

Fedor is now about 450 nm behind me but even so, if I could get a little more north, I would be able to keep sailing rather than just drifting with the storm, so I am going to keep sailing as long as it’s safe to do so. When the swells become more dangerous, I will likely need to go into hove to.

The storm is at its peak over the next 4 hours and then should ease a little. We just clocked 50 knots on my display so it’s definitely windy out here, but until I need to hove too there isn’t a lot for me to do, so, you guessed it… I am going to try for another attempt at sleep.  Hopefully I can ignore the alarms going off every few minutes.

I would normally use this section of the blog to thank my degree sponsor but sadly there isn’t one tonight however I am still struggling in a major way to reach funding targets, so if you would like to learn more about the sponsorship option, please take a look here.

Thanks everyone and goodnight.