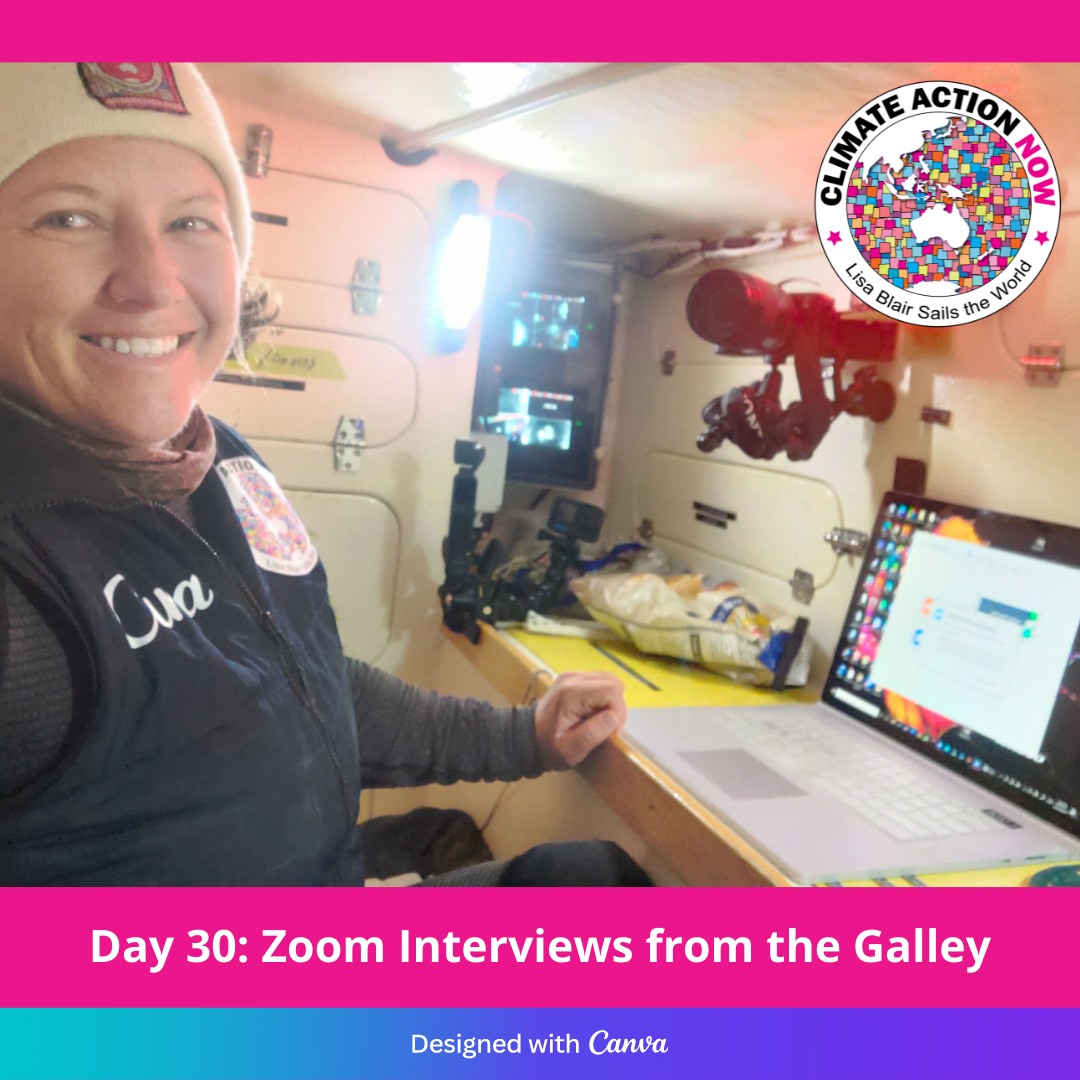 In Blair’s latest blog post, she writes about one of the biggest knockdowns experienced on the voyage so far.

Last night was a pretty normal, or should I say new-normal night at sea, for someone who is sailing in 30-45 knots and five–six-metre swells. It was rolling in the five metre-plus swells and there were squalls (localised storms) all around and the winds would change from 20 knots to 47 knots in the peaks. I ended up leaving the third reef in the mainsail and sailing the night with that and the storm jib. Every now and again we would get a shove from a rather large wave but it was all manageable, so I was finally getting to go to bed.

I am really starting to feel the fatigue after so long without much sleep but it was already 5.30 am when I got to bed, and the very first blue tinge of dawn. I had filled up the hot water bottle and was finally settled in my bunk and literally had only just shut my eyes when we were struck with an extra-large wave. Poor Climate Action Now was smashed completely on her side as tones of water was dumped on us.

The winds were at a peak, and it was blowing 45 knots at this moment. The wave seemed to strike more on the bow with such a powerful bang that it shoved us all the way through a gybe.  Lying in bed I could feel the boat list to port and then to starboard where she stayed pinned on her side by the force of the winds.

This is not good, so I scrambled to dig myself out of my sleeping bag and when I finally got free, I looked outside the hatch to a world that was whipped into a frenzy from the wind.  I have taken to not keeping the preventer line (a line that runs from the back of the boom to the bow of the boat and secures the boom from accidentally gybing) tight when I am in rough conditions as I continued to break things when we were putting the boom in the water. With some slack in the line the boom was able to move back a bit without breaking anything but it was still tight enough to prevent a gybe.

So, as I looked out the hatch I could see the preventer line had caught the boom before a full gybe had been completed so I should be able to just gybe it back and it would be fine…..  Wrong!

The winds were pinning us so hard and as the jib was also on the wrong side, I was effectively in the hove too position and drifting sideways.  I had only just hopped out of my warm bunk and it looked so wet and miserable on deck that I tried to correct by working the B & G Auto Pilot controls but after 10 minutes of being pinned and the boat no going closer to the wind or away from the wind it just wasn’t going to work. I had to suck it up and go on deck.

I took a moment to quickly put my Musto MPX Wet weather gear on before climbing out.  We were pinned so far over that half the boat was underwater, so I knew it was going to be wet. I crawled on deck and the first thing I did was take in all the slack on the mainsheet (this is the control line for the boom) as this was slack because the weight of the sail was held on the preventer line.  This made it save enough to pass across the traveller to get to the helms at the back of the boat.

I had taken Climate Action Now off Auto pilot I tried to correct with the sails as the, were but it just wasn’t going to happen. In the end I needed to complete the half gybe that had occurred and then gybe again to get the boat back to course. It was almost an hour before I went back below and got warm again, but I was so pumped by this time that sleep was hard to come by. I think I finally drifted off at 9am.

Waking a few times through the day I have now firmly given up any hopes of a normal sleep routine or of sleeping in the dark hours rather than when the sun is up.  I slept until 1pm and managed four hours of sleep. I had a zoom interview scheduled at five so I couldn’t sleep any more if I wanted too.  I went through my normal routine normally reserved for mornings, at 4pm. After that I had my zoom interview in the galley.  The winds were still 25-35 knots, and we were getting a few wipe outs. Halfway through the interview we surfed a wave at 22 knots which caused me to call out in excitement.

With the time zone changes I am now needing to change out the micro plastic filters for the Australian Institute of Marine Science at 7pm and 9pm each night because for that I am working on OZ time.  At some point I am going to be doing these changes at 2am as I keep heading around Antarctica. Totally worth it though for the valuable data I will be bringing back.

And now it is once again early morning and I still haven’t made it to bed, so I am signing off. Before I go I would like to thank the following degree sponsors.

135 West – d’Albora Marinas, Nelson Bay Port Stephens NSW – Thanks to d’Albora for your amazing support, this marina is a little gem if you like cafes and being close to the center of town as it has a great waterfront restaurant district.
133 West – Glass Australia – Thank you to Claire, David, Shelia and Renee for your wonderful support.  I really appreciate it.