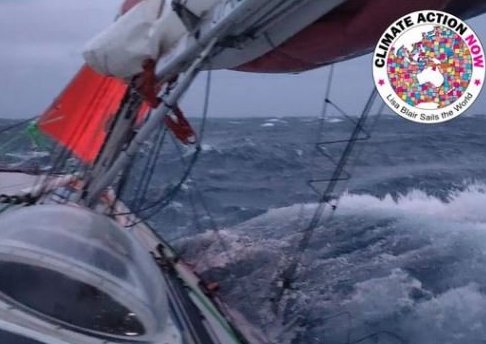 In her latest blog post, Blair prepares Climate Action Now for a storm and discovers something that no sailor wants to find on their boat.

Well tonight has actually been a really long night, which is why I am unintentionally still up and working on the blog at midnight.  But let me go back to this morning first.

This morning I was needing to be mostly awake from about 5am as I was waiting for the new winds to arrive, signalling the beginning of this storm. I had set my alarm to wake me every 30 minutes so I could check if the barometer had started to fall or not, indicating the new change.  I still had the second reef in the mainsail, and I really wanted to put the third reef (third tuck of the sail down to shorten it in stronger winds) in before the stronger winds arrived.

My forecast from Bob (Metbob) showed that I could expect gusts up to 50 knots in this system and waves of five meters or more. I wanted to get the jump on it and get the sail tucked down before it got too strong.

By 7am the winds were just starting to reach 30 knots. I decided it was time to get geared up and on deck to put that reef in.  I also did a full deck check just to make sure it was all as it should be before going below and filling out logbooks etc.  Most of the day was spent in bouncy rough conditions as the winds continued to increase and the swell was starting to break and shove Climate Action Now around.

I was able to complete my normal routine but by 5 pm the winds were starting to hit 45 knots and it was only due to get worse.  Now 45 knots might not sound like much but here in the Southern Ocean where the air is colder the winds are denser it actually applies more pressure to the sails. As a rough rule of thumb 30 knots of wind in the Southern Ocean is similar in feeling to 50 knots of wind in Sydney harbour, so at 45 knots it was starting to feel like I was sailing in 60 knot winds.

I had remained undecided all day on if I was going to Hove too or not.  ‘Hove to’ is the storm tactic where you put the storm jib on the wrong side of the deck sheeting it to windward, you centre the mainsail, and then you then turn the rudder to keep driving the boat into the wind.  This combination very effectively stalls the sails out and instead of going forward you end up drifting sideways.

Then your keel which is the lead weight under the boat, creates enough drag that you get this area of disturbed water known as the slick.  The slick works similar to pouring oil on the water and takes out all the bite in the waves. They actually either break on the edge of the slick, or they don’t break at all, and you can pass safely over them.

I was now sailing with the storm jib and the No 3 reef in the mainsail and the seas were really getting quite aggressive, shoving us around and pushing us so far over that half the boat was under water.  I needed to put my fourth reef in to balance the pressures of the sail before centering the mainsail, gybing once to get the jib to the right side and then gybing again to go into ‘hove to’.  Most people will tack into the ‘hove’ to position but I had so much wind I knew I wouldn’t be able to get around.

It took me two hours to complete what normally would have taken me 30 minutes.  I felt like I had just done a whole round at the gym but finally we were settled and, in the hove to position. Now I can just go to bed and get a great night’s sleep knowing that we are safe in the conditions.  I was also ready for dinner, so I made up a lentil soup and some flat bread.

As I was sitting in the navigation station eating, I started to hear all this sloshing over the sound of the storm…  An unusual amount of water sloshing.  I slid down to the low side and shone my torch through the hatch that was there into the back Lazarette compartment only to find that it was half flooded with around 300 litters of water.

I was a little worried that I had ruptured a through hull fitting but as I looked some water poured from the deck right into the boat. I could just make out that a hose for the manual bilge pumping system had snapped and was no longer attached. The drain for this goes out to the cockpit and as we were healing over so much and getting so much water over the decks the water was funnelling backwards through the discharge point and right to through the broken hose and into the boat…

Bugger.  This was the absolute last thing I wanted to be doing but it needed to get sorted asap.  I dug out one of the wooden bungs and hammered that into the hole on deck to stop any more water coming in but now I needed to get this water out.  After some thought I worked out I just needed to repair the hose and then I could use the manual bilge pump to pump the water out, so I climbed in the back to take a look.

After some effort I worked out that the hose had shrunk so tightly on to the fitting in the cold that I was not going to be able to get it off without warming it up first.  So, a mission of a hike across the decks again and back inside the main cabin. I boiled a kettle of hot salt water and poured a little into a keep cup with a lid.

Back on deck and right into the middle of this storm it was a scramble back to the aft hatch before climbing back into the lazarette locker.  Armed with hot water it was a five-minute fix to warm the hose up and get it reattached to the fitting and situated in such a way that it shouldn’t snap again (hopefully).  Job done I now had the task of bailing out 300 litres of water, which ended up taking me around 20 minutes of pumping to achieve.  I don’t think that the level got high enough to do any damage, but I will need to wait until tomorrow to take a look.

And so I am now half asleep while I write this and will now sign off but before I go I would like to thank tonight’s degree sponsors. So thank you to: