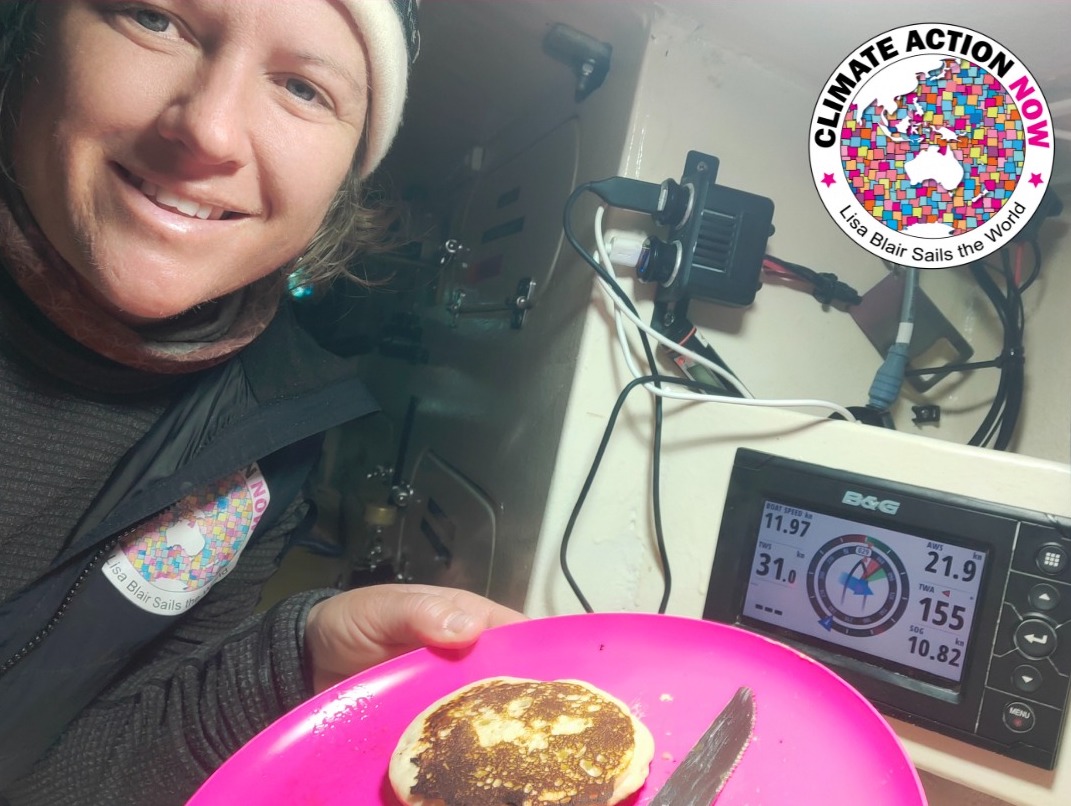 Last night I managed to get to bed at 3am local time but as you can see on the tracker the wind shifted while I was sleeping.  I didn’t notice until I got a 30-knot gust at 8am.  I had set an alarm to wake me up (especially loud, designed for people with hearing difficulties) so I could monitor things, but I think my body decided to mutiny against me as I slept right through until we ended up pinned on our side with the B&G alarms blaring in that gust.

The winds were 15 knots when I went to bed, so 30 knots was a big jump. We definitely had too much sail up.  I was still carrying the full mainsail, the no 2 Jib and the storm jib so I scrambled to get out of my sleeping bag and because of the urgency I didn’t get time to put on wet weather gear or gloves.

I woke up pretty quickly when the cold air hit me and immediately started to furl away the remainder of the no 2 Jib before putting in the first reef in the main sail. I hopped that this gust was short lived and that the winds would ease up afterwards. I was right, because as soon as I got the sails squared away with the first reef and storm jib the winds reduced back to 22 -25 knots and the sail configuration was right. I went back below and crawled back into bed. I had managed to get a solid 5 accidental hours of sleep in, but I was still feeling pretty tied still so I hopped back into bed for some more.

At 1100 the winds started holding above 25 knots and I dragged myself out on deck to put the second reef in the mainsail. It didn’t feel as cold but that is likely because there was a lot less sea spray, and the swell wasn’t too large, so I was able to remain mostly dry.  I snuck in one more hour of trying to sleep before I finally got up and started on emails and the likes.

When I finally did wake up, I had a text from Bob McDavitt suggesting that I needed to get north enough to reach 52 South in a few days. He said it was to avoid Rime Ice. I messaged him back because I wasn’t too sure what type of ice Rime Ice was. He said if I kept heading east, I would encounter freezing in the rigging and a build up of ice which is called Rime Ice.  I have read all about the dangers of ice forming in your rigging and how it can affect the stability of your boat but not the technical term for it, so you learn something new every day.

Incidentally, when Fedor sailed past this area, he actually sailed within 1 km of a big iceberg, so I was taking Bob’s advice very seriously and opted to go Northwards. I will be slowly making the climb to 52 South and then I will be having another front with six-metre swells impacting the boat.

The rest of my day was fairly normal, and the winds maintained around 25 knots for the majority of it.  I changed the micro plastic filters over and got a little creative in the galley (kitchen) and decided that I would have pancakes for dinner…  I am a grown women so I can totally have pancakes for dinner, right? Well, I did, but it was a little entertaining when the winds built above 35 knots and we started to broach and roll over so much that I needed to try and catch all the items on the countertop as we did. It made for an entertaining dinner to say the least.

Just as I was finishing up the winds really started to come through and we were maintaining 35 knots, not just gusting it. I decided it was likely time to put that third reef in and settle the boat for the night before I retire. Not 10 minutes later and I was getting hit with gusts at 45 knots tripping all the alarms.  I wasn’t expecting anything worse than this at the moment, so I didn’t feel the need to put in the fourth reef.

While I have been writing this we have had lulls of 20 knots and gusts of 47 knots coming through making things interesting.  The moon is also out with a dotted cloudy sky with patches of clear in some areas so while there is a bit of wind and Climate Action Now is ready I can going to grab a nap…

Before I go I would like to thank the below degree sponsor:

137 West – Point Insurance Next Gen Accident and Sickness – Thanks to Debora Crowe for your wonderful support.