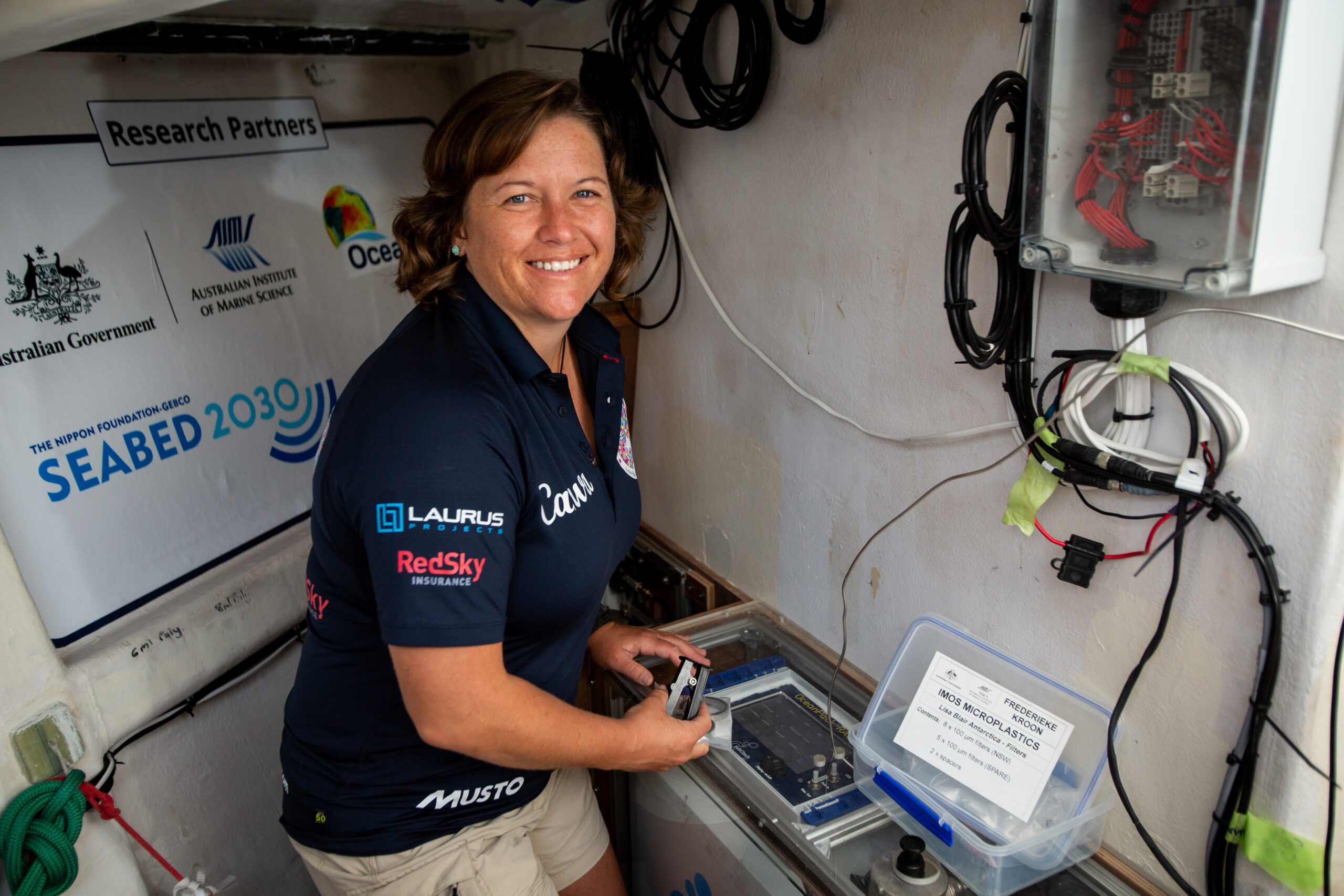 In her latest blog post, Blair answers a question from social media on how the microplastic sampler works. She also names a drifter buoy after Australian sailor Jessica Watson, who inspired Blair to persist with offshore sailing.

Well last night after sleeping most of the night I woke at 3am to write the blog but I didn’t get back to bed until 6am. It was close to six when I was starting to think about getting another sleep, but I needed to do the microplastic sample change at 0600 so I decided just to wait up for it.

I have received a great question from Alexandra asking for more information on how the microplastic sampler takes the samples and today is a great day to tell you all about it. I have a built an internal unit that was designed by Sub C Tech. I was fortunate enough to be able to rent the unit from The Ocean Race.  It is a two-part system. The main system runs as a micro lab and is 500 mm high x 800 mm long x 300 mm wide and is mounted in the for area of the boat in the sail locker just in front of the mast.

This part of the unit is the science section that is constantly measuring data sets in ocean health like acidity, salinity, PCO2 (carbon in the ocean) and chlorophyll etc. It helps to give an understanding of the general ocean health of the measured area.

When I need to change the microplastic samples there is an electronic gate valve inside the Micro Plastic sampler (MP Sampler) that shuts off the water flow. I then have a built-in hand pump to push any excess water through the collection chamber before locking off the return valve to stop any water coming back in while the collection chamber is open. I can then open this chamber, removed the collected samples, store and label these before replacing them with new blank mesh filters to collect the next samples.

So, for the whole of the record, I have been waking up at 0400 and 0600 UTC no matter the time zone to make sure I can collect these samples. When I return to land they will be processed by AIMS the Australian Institute of Marine Science who is working in partnership with IMOS.

So imagine my surprise when I went to go and change the microplastic samples over this morning only to sadly find that the pump that pushes the water through the system has failed. It was not unexpected as it has been working day and night for the last 71 days, so it was bound to fail at some point which is why I am carrying a replacement pump. I don’t believe the repair will be difficult, however I did not wish to attempt it then, so I decided to get a few hours’ sleep, then get up and crack on with these jobs before the next storm hits this afternoon/evening.

I only managed another hour sleep before the boat woke me to change out the sail and put in the second reef in the mainsail, as the winds started to build. I was sailing on a beam reach with 25 knots of wind, and it was just enough to make life interesting at sea, and things like repairs difficult. I decided to table the repair for the minute as I also wanted to deploy the next Bureau of Meteorology Weather drifter buoy.  I have been struggling to get clear enough conditions for deployment between storms.

I still have another four after today’s to deploy so we are deploying them every 15 degrees of longitude between now and the finish. So today, before the seas got to rough, I went back on deck and got set up. I decided to slow the boat down by luffing the mainsail as a way of making things a bit easier. Each buoy weighs around 38 kg so they are not easy to move around the boat or get out of the back hatch but I was able to get it into position and I decided to dedicate this drifter buoy to Jessica Watson.

We all know her remarkable story of becoming the youngest person to sail solo non-stop and unassisted around the world at the young age of 16 but while she was just finishing her epic journey I was just learning how to sail. I had been sailing for a little less than two years and just returned from my first ocean crossing where I sailed from Samoa to Hawaii on the ‘Bird of Dawning’ with a great friend of mine from university, Jasmine and her father Keith as well as crew member Hugh.

I remember finishing that trip and returning to Australia after some time in Hawaii and just thinking I wanted to do more ocean sailing, but I didn’t know what. I came across the Clipper Round the World Yacht Race and right away I was hooked on this idea of sailing and racing around the world with the Clipper Race which is designed for inexperienced crew. The only problem was it was going to cost around $80 000 to do the whole circumnavigation and I was earning $20 an hour working in the mall with no savings.

I honestly had no idea how to do things like fundraise or sponsorship seek, and the more I looked into this the further away my dream of racing in the Clipper 2011-12 race started to become.

Then I sat down and watched the news as Jessica at age 16 sailed into Sydney Harbour and it occurred to me that she was able to figure it out at such a young age and do it on her own, surely, I could figure out how to do it with a crew. I signed my contract and committed to the race that night. With a lot of effort and struggle, I was flying to the UK to start my circumnavigation around the world. I can honestly say I would never have gone down this path of records and ocean sailing if it wasn’t for competing in the Clipper RTW Race, it was the inspiration of so many solo sailors.

It was sitting in front of the TV watching an inspirational 16-year-old succeed in her dream that got me started.  So, thank you to Jessica for being an incredible inspiration to me and many others around the world.

So today at 1151 UTC in position Latitude 48 03.56S longitude 47 41.65E I deployed drifter buoy Jessica Watson.  Afterwards I finally made some food before tackling the science unit. I was able to isolate the power and confirm that it was the pump that had failed. Then it was a case of un-plumbing and un-installing the old pump before installing and re-plumbing the new one. It had a watertight connection however, unfortunately, it was the wrong side of the connect attached to the new pump, making for two female connections.

I ended up having to cut the wiring and using some straight joiners and some heat shrink to keep it watertight.  I re-wired the new pump in place. Success, it started working right away so I packed up my tools and waited for the nearest hour to start the samples again.

I have also been running light on food in the cupboard, and so I dragged out a new food bag today, which is always exciting. I restocked the cupboards and made my favourite meal of bare burrito for dinner to give me a nice kick of protein and set me up for the incoming storm. The winds and swell have been slowly building all day and at 6pm started to reach its peak of 47 knots. Mostly though the winds are around 35 knots, so I had put the third reef in the mainsail and furled away the jib, so I only have the storm jib up now.

The swell is back up to around six meters, with the occasionally breaking wave, but we have had nothing like the conditions of the last storm, this one so far has much less bite. And now I plan on trying to get a good night’s sleep before the challenges of tomorrow come.

I would normally say thank you to our degree sponsors here but unfortunately there isn’t any for today. There is still plenty of time to sign up and become a degree sponsor. If you can support, it would be very much appreciated as we really need to reach our base targets for fundraising. Instead, I would like to give a huge shout out to the Clean Ocean Foundation.