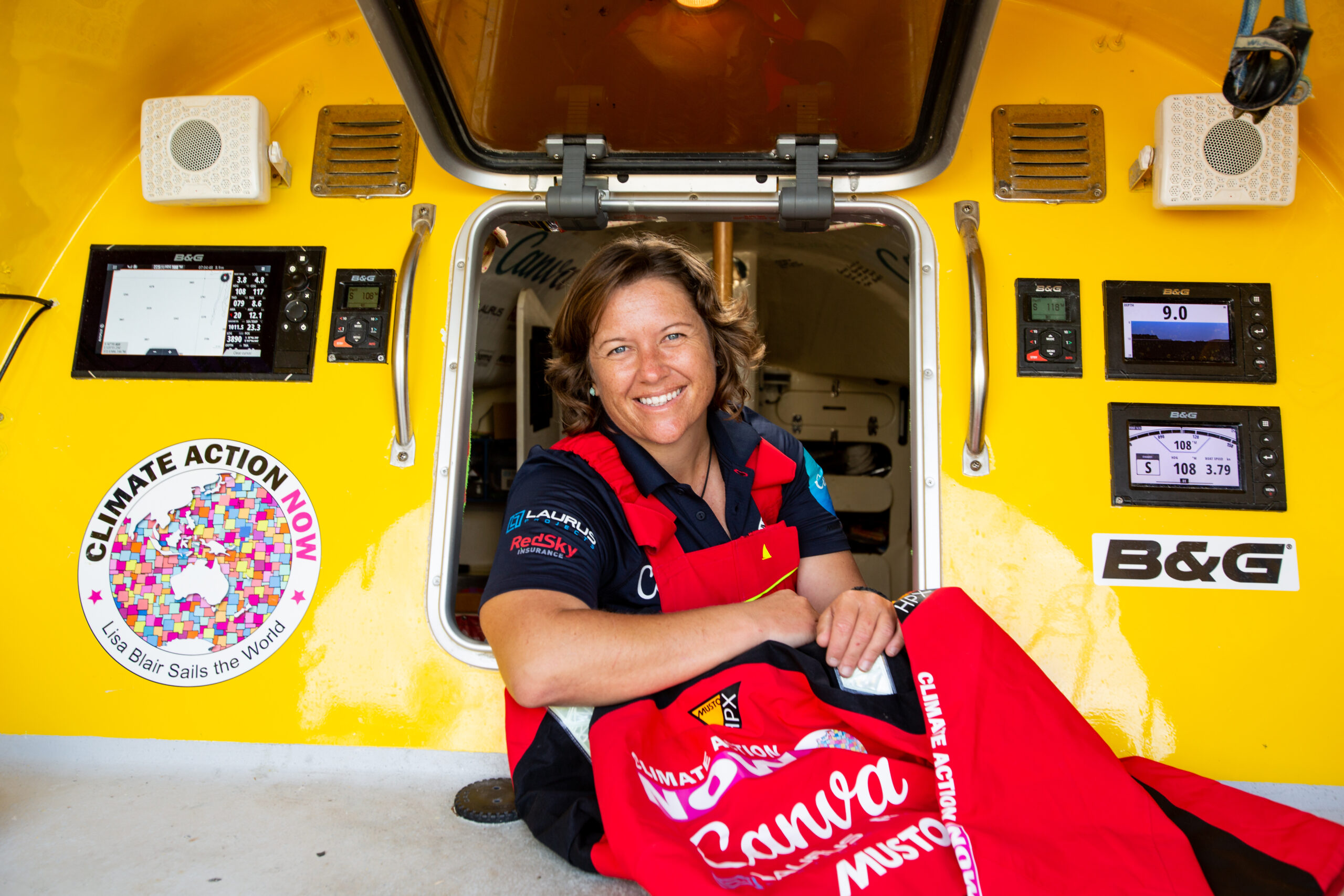 In her latest blog post, Blair is surprised when she sees a nearby fishing boat on the chart. She also celebrates reaching day 72 of the voyage, the same day when in 2017 Climate Action Now was dismasted.

Well last night I had great intentions on sleeping lots, however with my proximity to land it was a hard to come by thing.  I was sailing on a NE course as Bob (MetBob) has me climbing north to get above some seven metre swells over the next few days, but this put the French Southern Territories directly in my path.

This is a small collection of islands owned by the French, and as they are islands, the depth of the ocean changes in the surrounding waters, going from 4000 m deep water to 100 m deep water. I was really aiming to stay off the shallow waters and also outside of the EEZ zones (Exclusive Economic Zone) and into International Waters. This meant that I needed to clear the island by 30 nm.

We were hoping that the winds would swing from the W to the WNW before I reached them, however I wasn’t so lucky. As I checked my heading at midnight, I notice that I was sailing directly for the islands and would likely need to gybe off to get around.  I wanted to give it the most amount of time for the winds to shift as we knew that the shift was coming, so instead of just gybing away, I waited, and started sleeping in short 30-minute intervals as I slowly got closer and closer to land.

Finally at 0900 it was time to get up and put a gybe in. I had been sailing with the chart zoomed out, so I could see the boat and the islands. Once I woke, I zoomed in to check the course I had been making, and if I was sitting in a chair, I would have fallen off my seat with surprise.  I could see a boat less than two nm away from me on the charts.  Eeek, where did they come from? I had a closer look, it was a French owned fishing boat operating out of the islands there.

I checked out the CPA (closest point of approach) and worked out that we would be passing each other less than half a mile away.  With their current course taking them west and mine taking me NE we would pass each other in 30 minutes.  I wouldn’t be able to gybe until I got behind them.  I then had the worry of if they were deploying nets, or long line fishing with buoy’s out, or any other obstructions that they could be trawling with.

I popped my head up on deck to see if I could spot them only to be surprised that it was a lovely clear blue skies kind of day, even though I was still getting 30-35 knots of wind blowing through.  When I looked over the starboard bow, I could see a white fishing boat heading my way.

The Ils Bourbon is a 55 m long x 11 m wide fishing boat, the second boat I had seen this whole trip.  I went back below and jumped on the radio and tried to hail them.  It took a couple of tries before they picked up and replied with a heavy French accent. I spoke with the second ship of the trip via VHF Radio.

I confirmed that I was a sailboat and that I needed to gybe off the islands, but I wanted to be sure that there weren’t any nets etc that I would foul up on behind them. He checked my position on his AIS and confirmed an all clear for me to gybe around behind them.

We ended the call, then a few seconds later he called back wondering where I hailed from and where I was going.  I explained that I was sailing solo and non-stop around Antarctica and that I had left Australia 72 days ago and I am on the last leg of the trip back to Australia.  I don’t think he knew what to say to that, because his reply was: “That’s a long time at sea.” I agreed and after wishing each other a safe and successful voyage we ended communications.

Back on deck and I put a gybe in to send us SE away from the shallow waters and went below to make some breakfast.  I held that course for 4 hours before I decided to gybe back and finally keep sailing past the French Southern Territories.  I was now sailing clear of the islands, and as I didn’t get a lot of sleep last night, I decided to go to bed at 5pm for just a few hours before waking, doing the blog and dinner.

I ended up sleeping so well that I stayed in bed until I just got up at 5am to write this blog. I woke many times in the night to check on things, but it was easy to fall right back to sleep. Not wanting to ever get as tired as I had been the other day, I took the opportunity to sleep.

Today has also been another rather large milestone for the trip.  While I sailed past the location of my dismasting more than a week ago it was actually on day 72 of the last record that it occurred. So today is one of remembrance in that regard.  We also have officially cleared all of South Africa and given the dismasting last time I promised myself this time that I wouldn’t celebrate it until I had cleared Madagascar.

But now I feel like I am officially entering the final leg of the journey and on the home run. You might have noticed that I have slowed just a little overall. This is because it is the time to play it safe.  All the equipment has done a remarkable job of working so far but I still have around 3000 nm left to sail.  I don’t want to push too hard and end up breaking anything, and with the strong lead on Fedor’s time there isn’t a need to push.  It is now a game of slow and steady wins the race.

I also have a new storm just around the corner, so today will be filled with pre-storm checks before riding it out.  For now, though I plan on going back to bed while I can. But before I do, I would like to take the opportunity to thank the below degree sponsor. You will notice that the degree that they have chosen is one that I have already sailed past, this degree was chosen as it marks the birthday of the dedication person.

016.11 East – Mark Hutton who has dedicated the degree to his late father Mal Hutton who introduced him to sailing and tenacity.  “A winner never quits, and a quitter never wins.” Thanks so much Mark for your support and celebration of Mal’s memory. Chose a wise word to honour him by so thank you.