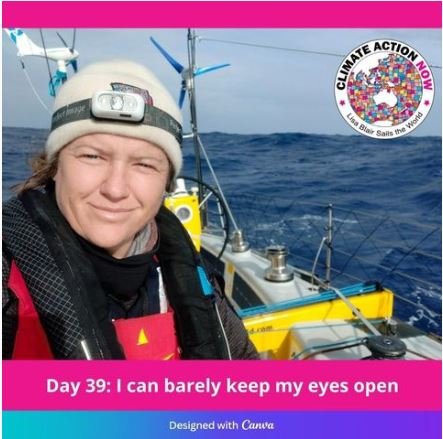 In her latest blog post, Blair takes a nap after the rigours of the previous evening’s storm, recalls three knockdowns during it and some further knockdowns that followed before the weather became sailable again.

Well, it seems to be another all-nighter tonight; in last night’s storm the winds ended up peaking at 50 knots and the swell continued to bash poor Climate Action Now until around 5 am where the winds started to abate.

I was just drifting sideways and feeling frustrated as I wasn’t too sure how much ground I was losing to Fedor at that moment. In spite of that, I wasn’t prepared to give up the storm survival strategy of hove to until after the sun was up and I could take a good look around me at the waves and determine if it was safe to start sailing again… I decided to get in a two-hour sleep.

When I got up, I went on deck to find a mostly cloudy sky with a small strip of sunshine in the middle. You could visibly see the outside edge of the low-pressure system in the arc of the clouds as it left us in its wake.

There was another bank of clouds rolling in directly behind it though. I wasn’t sure what it was going to bring, but at that moment the winds were only blowing at 18-25 knots and although the waves were still massive, they had calmed enough not to be breaking. I felt it was safe enough to try and sail.

The shape of the wave is everything out here. This morning they were still at 7-8 metres in height – imagine a 2-3 story building – but they were big rolling mountains rather than steep peaks.

The body of the wave would span a football field. If you imagine the first quarter mark being the peak of the wave, you slowly travel up this mountain, reach the peak and then travel down the other side. Most of the time they are fine, but every now and again you get one that forms much sharper and much taller, those are the ones you need to watch for.

We suffered three of what I call large knockdowns last night. They were violent enough to literally throw us across the ocean. Climate Action Now is 50 feet long and weighs 10 tons, so it isn’t like we are that small, but compared to a football field size wave, we were tiny.

I was just thankful that nothing more than two broken wind generator blades and two missing winch handles occurred. After deeming it safe to sail, I gybed the boat to starboard tack (the wind is now blowing over the starboard side of the boat first) and I then set about increasing the sail area.

I decided to winch up the mainsail from the fourth reef to the second reef and get a little power behind us. I was also looking at putting out the No 2 Jib, but as I was shaking out the reefs, a new squall started to develop and we were going to get caught by it shortly.

As I was desperately needing to go back to bed and try for a decent sleep, I opted not to put the jib out and to just keep the storm jib up instead. That decision paid off as we were soon getting 30-35 knots of wind. I found myself debating if I should put the third reef back in, but thankfully, the winds eased again, and I was able to go back below and get a little more sleep.

When I woke up, I made breakfast and checked the weather forecast. I settled into my daily routine of filling out the log, filling out the sleep journal for the chronic fatigue sleep research study I am also participating in, and changing over the micro plastic samples.

I am still fairly tired as I didn’t get that great an amount of a sleep, so I also squeezed another little nap in and felt so much better, But it is like when you have a day sleep, you feel a lot better, but now not tired, so I find myself at daybreak and… I am still awake.

We have again had a few decent knockdowns today, nothing as large as what I went through last night, but still, larger than the rest, so I am still taking care around the boat. No dwelling in open areas, instead isolating myself in the navigation station when I can.

I managed to slice a nice big line into my thumb tonight while making noodles for dinner. I was fishing amongst the cutlery for a fork and managed to catch it on a knife in the same container. It’s not a big cut. but it’s at least 5mm deep, so I am going to have to watch it for infections. It is right on the pad of my thumb, so it’s going to make life annoying for a little while.

Meanwhile, in the wee hours of this morning, I am expecting a front to hit. I think it is just starting to arrive, so I need to sign off so I can go on deck and gybe Climate Action Now before finally going to bed and getting some sleep.

Again, this is where I would normally thank a degree sponsor, but sadly there isn’t one for tonight. However, I have been told that we have had a few more degrees coming through, so I want to thank those people for jumping in to support me and this project. If you are interested in learning more, please click: https://lisablairsailstheworld.com/360-degree-sponsors

Memory from Mum
We have had a few people question why the videos seem to cut off after 1 minute. This is a safety feature. It automatically cuts off after a minute because sending data by satellite is very expensive.

What had happened is Lisa was trying to send a short video (only a couple of minutes) for a news story. This was her first attempt at sending a video from sea. It was starting to transfer and then the satellite would drop out. Instead of picking up where it left off, it was resending from the beginning. This was happening over and over. It was a very expensive hiccup. Hahaha.

During the 2017 attempt, Lisa was restricted to sending a photo almost every day and a few videos for media. During that trip, her total bill for data was over $20,000. She was paying that off for the next two years I seem to remember.

This time, thanks to http://Canva and http://Pivotel, she is able to send a one-minute video and a photo every day, and still fit in a few interviews and podcasts by zoom. The videos are great, they really help us able to share the journey with her.