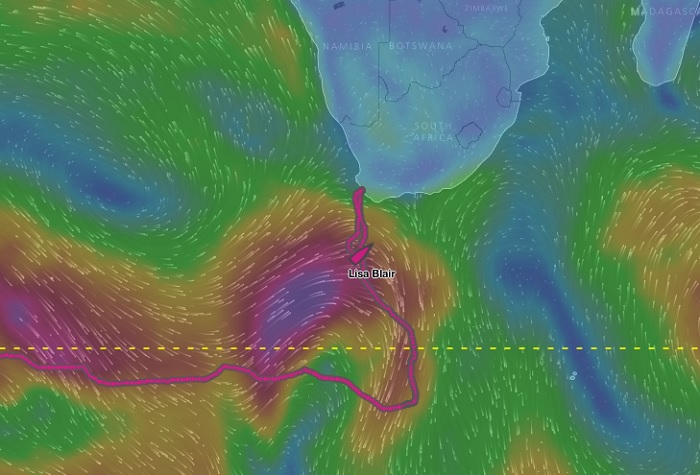 Lisa's track to avoid the storm.

Lisa Blair has just left Cape Town, where she called in after losing her mast during her Antarctic circumnavigation attempt, heading for the point she was forced to abandon the “non-stop” portion of her journey. The first few days have been testing, as Lisa reports:

Well I do hope you are all feeling better than I am at the moment. Last night when I wrote that blog I really thought that I was past the sea sickness however today it seems to have persisted with me sailing directly into heavy swells and 30 knots of winds… I still haven’t thrown up but every time I do something like put a reef in or just going to the loo I feel like I am about to and need to get horizontal asap. I am also getting the hot and cold shivers that go along with sea sickness so I am in and out of my sleeping bag. I have managed to get a little food down however it has been a rather big sail change day so I am feeling very tired.

You will have noticed that the boat has been going rather slowly today. This morning I woke to a small front passing that offered me 35 knot head winds. I am trying to maintain a 60-degree angle to the wind to take some of the impact out of it but it is still rather unpleasant and I am crashing off the backs of the waves with such force that I felt I needed to slow down. At around 10am the front had passed and the winds started to back to the south but they were not very consistent. I shook out to the second reef and would often find myself in 17 knots of wind and a few minutes later getting 30 knots… So I am either overpowered or underpowered making the going slow. Then around sunset the winds started to drop out and I would be getting 10 knots to 25 knots so I have just shaken out to the 1st reef on the mainsail but I still don’t really feel like I am making any progress.
Heading out.

Anyway it is going to be a short blog tonight because my head is pounding and my stomach is churning, I am hoping for some consistent winds tomorrow.

Well the last 30 hours or so have been quite trying. After my last blog, the winds continued to abate, so despite the fact that I was feeling anything but fantastic, I was back on deck shaking out another reef. Finally, with one reef in the main and 10-15 knots of wind I went below at around 10pm. Five minutes later I lost my battle with sea sickness and had my head over a bucket for the next tem minutes.

I do have to agree with that saying though 'better out than in', because I felt a lot better almost right away. I was aware that I needed to make sure I don’t get dehydrated and that I got something in my stomach asap, so I found myself curled into a ball in my pipe cot of a bunk very very slowly eating pringles. They were all that was right at hand and was salty. After a few minutes I managed some water and then amazingly I was on the road to recovery.

I was lying in bed willing the weather gods to keep the winds consistent however I don’t think that they were listening that day, as the winds continued to abate until I was wallowing in 3-5 knots. I eventually managed to nibble down two nut bars and a whole bottle of water with a hydration tablet in it. I then crawled back on deck and shook out the final reef in the main sail in an effort to stop doing donuts in the Southern Ocean. Finally, with full main and the genoa out I was sailing again at a steady 3 knots making my way to the SW as instructed.

I managed to get another sleep in and woke up at 7.30 local time. I received a text from Bob asking for me to sail NE as the system approaching has changed and I needed to go north to get around the worst of the swell. This was almost a perfect reciprocal course and meant another 2 days of loop-de-loops in the Southern Ocean.

So, the plan is sail NE until the winds go to the N and then I will tack and sail West until the winds start backing… This is expected to happen late tonight just ahead of the front. The winds will shift to the SW bringing a SW swell up to 8 meters and my plan (or should I say Bob's plan) is to then sail NW keeping the wind on the port bow as we sail out of the system. The next day when the swell eases I can finally go south again.

Given this forecast…. and the fact that it is a large enough system to have bob make me sail around it, I have been busy all day with storm preparations……. just making sure everything is in order. I hoisted the storm jib, reefed down to the 4th reef in the main sail and generally just tidied up for rough weather. Winds are expected to average 35 gusting 50 knots so I am in for a night of very little sleep. I am however very pleased to see that I have passed the sea sickness and even managed to get three whole meals down today to give me my strength back.

So with a few hours until the peak of the storm I am going to try to get a little shut eye.