Lisa Blair is a woman who generally gets what she wants – because she doesn't give up. After circumnavigating the world in the Clipper Race and competing in the solo Trans-Tasman event, her next goal is to become the first woman to circumnavigate Antarctica.

In September she found the boat she needs – Funnel-Web, an Open 50 designed by Robert Hick and commissioned by Ivan Macfadyen for offshore ocean racing. The design spec was ‘a go anywhere and do anything yacht’ including Antarctica.

There's just one problem. Lisa faces a Catch 22 situation: “My campaign to circumnavigate Antarctica has always been hindered by the chicken and the egg scenario. I need the sponsorship to buy the boat but can’t get sponsored until I have the boat.”

Lisa's mother Linda has been a long-time supporter of her daughter's adventurous endeavours and has come to the party again, putting up her equity in a block of flats to purchase the boat. But for reasons that Lisa explains, she needs bridging finance to buy the boat in time to have a shake-down race in this year's Rolex Sydney-Hobart.

“We tried to re-finance against the three two-bedroom units that mum owns in Cotton Tree on the Sunshine Coast, however with the new housing market crack down this proved difficult. I then applied for a boat loan but was rejected yesterday on the grounds that the vessel is a racing yacht not a cruising yacht.

“Mum decided to put the units up for sale but we would not be able sell them in time to secure this vessel and compete in the Sydney-Hobart. So we are seeking someone to invest venture capital up to $140,000 for a three month period (until the units sell) with an option to extend for three months at a higher interest if necessary.

“The loan can be legally secured against the boat and the units and we are happy to discuss interest payments or profit scenarios. The vessel will have complete insurance for all activities.”

Linda Blair says, “Lisa has worked so hard on this project and it is such an amazing opportunity. Having found the right boat I thought it would be easy to re-finance against the units given the equity, however that is not the case. We really just need someone to bridge the gap until the units sell, it would be a real shame to miss this opportunity for the sake of a month or two.”

The units are listed with a local real estate agent with a reserve price of $1 million, giving $350,000 equity.

As we said at the outset, Lisa is a woman who does not give up her dreams.

“Every time I have been backed into a corner with sailing or sponsorship I have reached out to the media and something amazing has happened. Last time Mysailing editor Roger McMillan even went so far as to lend me his yacht Cator to sail solo to NZ and back. I am once again in a corner and don’t want to let this opportunity pass me by.”

If an investor or investors can be found in time, Lisa will use the Sydney-Hobart as a platform to raise awareness of our environmental climate and will be running a crowd funding initiative. People can purchase a post-it note for $20 and on that note write their climate action message. Eg. “I ride to work for climate action”. These post it notes will then be digitally transferred into a sticker that will cover the whole hull of the boat in all different coloured notes, each with their own climate action message. Lisa says this will “empower our communities” and she will be able to use the funds raised to further promote climate action.

Lisa can be contacted via email lisa_blair@outlook.com. 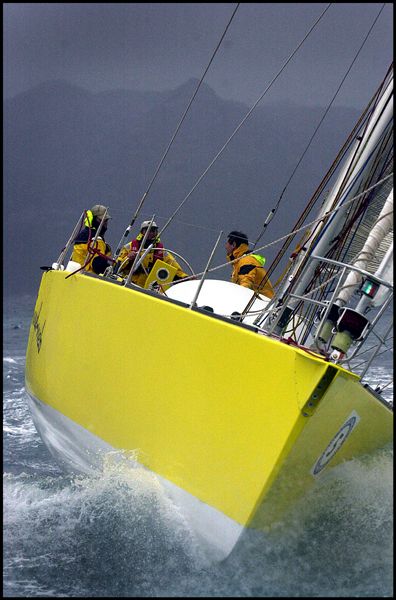