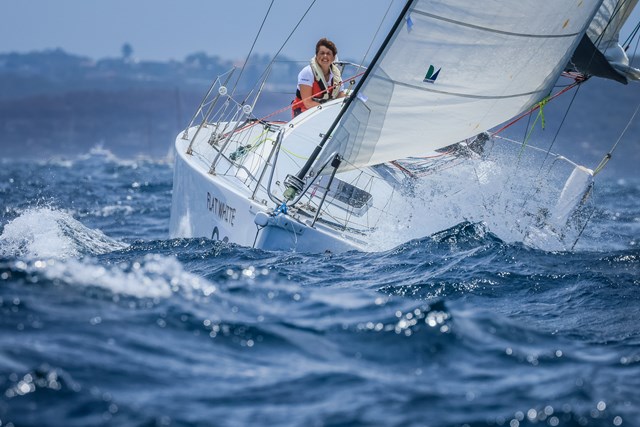 When Jen Linkova recalled her experience almost halfway into the 2021 Rolex Sydney Hobart Yacht Race yesterday evening, the Sydneysider’s words had the air of an ocean racing rookie.

However, her remarks about her highs and lows in the 76th edition of the Cruising Yacht Club of Australia’s 628 nautical mile event really belie her sailing credentials on the open seas.

In a text message from on board her boat Flat White, a Radford 12.2 she is sailing with Jason Cummings, Linkova reported: “Well, we got across the start line and of the Harbour with no drama – a huge achievement for me as it’s my first offshore race as a skipper.”

“No drama is mostly thanks to Jason, who kept both of us – or 3 of us, if we count Flat White – out of troubles.”

On Flat White, Linkova and Cummings are one of 10 two-handed entries still in the race.

This is the first time that the Sydney Hobart has allowed for a two-handed division. She was also one of six women boat owners and/or skippers to start in this year’s race.

At 8am today, Flat White was off the east coast of Tasmania, 38 nautical miles south-east of St Helens Point with 136 nautical miles to go to make the Castray Esplanade finish line. Sailing at 6.7 knots outside the rhumbline, it was eighth on the water among the 10 two-handed boats.

Linkova and Cummings were not alone in finding the early southerly conditions tough to handle. Many agreed that for two-handed crews, the challenge was bigger.

As Linkova reported on Tuesday: “The first day and a half were a bit rough. I basically spent 36 hours on deck, getting dangerously close to not enjoying the race!”

However, by Tuesday, the conditions had improved, as did those on Flat White.

“As the weather improves, we got our boat to shipshape finally, even managed to dry out a bit,” Linkova wrote.

“Now is all going well on board, enjoying gourmet dinner, nice view and a lot of TH [Two-Handed] boats very close to us. And a lot of dolphins!”

Whatever Flat White’s fate, the experience Linkova and Cummings will be one to remember.

Covid limited their time sailing together before the race began at 1pm on Boxing Day.

However, the pair had sailed together in the Great Race on bigger crews.

Linkova first raced in the Rolex Sydney Hobart from 2013 to 2015 on the German boat Flying Fish Arctos on which Cummings was skipper in 2015. She also sailed in the 2018 race on the Beneteau First 45, Dreki Sunan.

She has international racing experience too, having crewed on Scarlet Logic in the Round Britain and Ireland Race.

Meanwhile, Flat White has been sailed in two previous Sydney Hobarts by larger crews when it was named Red Jacket. Under that name, the boat retired from the fatal 1998 race.

In 1999, when owned by Ron Lally, it placed 10th overall and won her division.

Linkova bought the boat off more recent owners, Gerry Snijders and Annette Hesselmans who sailed it in the 2018 Melbourne to Osaka double-handed race with her brother Andrew.